v Sports in Kansas:3A, 2A, 1A Sub-State Volleyball Preview - Sports in Kansas 
Warning: include(../includes/bodytag.php): failed to open stream: No such file or directory in /home/kansass/public_html/ks/news/index.php on line 36

Sports in Kansas:3A, 2A, 1A Sub-State Volleyball Preview

St. Mary's Colgan Volleyball has been very impressive in 2A. 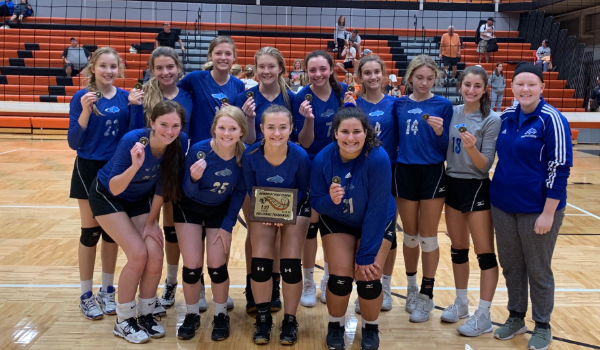 In the latest Kansas Volleyball Association poll released Wednesday night, Scott City has moved into the rankings and stands at 31-3. SC was not ranked last week and is ninth in 3A this week. Lakin, which went undefeated to win the Hi-Plains League regular season and tournament titles, has enjoyed a strong season with a 27-9 mark.

Rivals Phillipsburg (26-10) and Norton (18-16) match up in the No. 3 seed versus No. 6 seed contest. Phillipsburg has been ranked part of the year in 3A. This is an extremely strong sub-state with seven teams with winning records.

Weathers leads with 43 blocks, and senior Shelby Patton has 264 digs. Scott City has defeated Lakin twice this season with a three-set victory on Sept. 17 and a two-set win on Oct. 12. SC defeated Norton on Oct. 12, and has not played Phillipsburg since before ’15.

Seniors Lexi Cobb and Daryn Lamprecht are returning all-state in volleyball and softball. Both have won state titles in each sport, and each are committed to a Division I softball school. They easily lead the team in kills. Cobb has 299 with a .289 hitting percentage, and Lamprecht has 269 with a .223 hitting percentage. Lamprecht leads with 41 aces, and senior Taylor Burkhardt has 36 aces. Burkhardt paces with 473 digs (5.4 per set). She has 168 digs more than any other Eagle.

SL has continued to run a two-setter offense with junior Grace Fitzgerald (422 assists) and Cobb (333).

The Fredonia regional has just two squads with winning records. No. 1 Eureka (23-9) easily carries the top record. None of the regional squads are ranked. Pam Pitko is the longtime Eureka coach.

Frontenac atop own regional

The Frontenac regional features two of the classification’s top squads in host Frontenac (36-4) and second seeded Riverton (32-6). Third-seeded Baxter Springs (26-12) has also enjoyed a great year. Frontenac is ranked seventh, while Riverton fell out of the poll. Baxter has senior Delaney Barnes. She ranks third in Kansas with 1,059 attacks, average s 4.9 kills per set and carries a .316 average.

Frontenac is 3-0 versus Baxter Springs this year and has won six straight in the series. The Raiders, with Frontenac coach Cassie Rhuems, are also 2-0 versus Riverton this year. Junior Reagan Hipfl and senior Karma Fields each carry at least a .296 average and have 292 and 275 kills, respectively. Senior Bailey Rhuems is second in the state with 529 digs.

Riverton has one of the state’s top freshmen in Jacy Thomasson. She leads the team by a wide margin with 331 kills (3.9 per set) and a .386 average. Thomasson ranks second with 68 aces and has 87 blocks – more than two-thirds of her team’s total.

The Haven regional might be the most stacked at the top with three ranked squads in Hesston (31-6), Trinity Academy (31-6) and Cheney (28-8). Hesston bumped up a spot in the rankings from fifth to fourth. Trinity Academy is second and Cheney stands tenth.

Hesston was the undefeated Central Kansas League champions. Overall, the Swather high school programs have tallied 99 combined victories, the most for a single season in school history. Hesston has won seven in a row. Senior Talby Duerksen, a first team all-state selection last year on the Swathers’ fourth-place state team, has enjoyed another huge year with 483 kills.

She has averaged 5.6 kills per set and hit .308. Senior Elise Kaiser, a Newman basketball commit, has delivered another impressive all-around season with 224 kills (2.6 per set). Senior Lindsey Deegan paces the Swathers with 49 blocks. Kaiser leads with 312 digs and has recently passed 1,000 career digs. She has recorded 1,030 in her career. The 6-foot Duerksen just cleared 1,100 career kills – she has 1,105 currently.

Hesston has won four in a row against Cheney, including a Sept. 10 victory this year. The Swathers defeated Trinity Academy, a state qualifier in 4A last year, on Oct. 19. However, Trinity defeated Hesston, 3-0, on Oct. 3.

Trinity has non-seniors as its top-three hitters, namely with junior Austin Broadie, an excellent player with 414 kills (5.2 per set) and a .397 hitting percentage. The 6-foot Broadie has 1,040 career kills.

Trinity had beat Cheney, 2-0, on Sept. 28 at the Cheney tournament. However, Broadie did not play in Cheney’s victory this week. Broadie did play in the 2-1 loss to Hesston on Oct. 19.

The Cardinals have long been a traditional power under coach Sara Walkup, including at least 28 victories apiece in the last five years. Junior Kylie Scheer, the reigning 3A basketball Player of the Year, leads with 194 kills and a .308 average. She also is No. 1 on the team with 215 digs.

Beloit (34-3) and TMP-Marian (31-6) have matched up in sub-state several times in recent years.  No. 3 Lyons (28-9) has been one of the classification’s biggest surprises. Beloit is third and TMP is eighth in latest 3A rankings. Beloit finished third in 3A last year.

Perry-Lecompton: Royal Valley remains No. 1 in rankings despite losses

Royal Valley (31-6) is the headliner and the favorite in the P-L regional. RV remained first in the rankings despite two losses on Oct. 19; a 2-1 loss to Smoky Valley, and a 2-0 defeat to Abilene. Junior Ivy Fink has 323 kills (five kills per set) with a .357 hitting percentage.

Defending state runner-up Alma-Wabaunsee has been ranked No. 1 most of the season in Class 2A. Wabaunsee is the significant favorite with a 33-3 record. No other team has more than 22 victories. Wabaunsee stands second in the latest poll and flip-flopped spots with Colgan.

Senior Megan Strait has 227 kills, one of four players with at least 158 kills. Sophomore Lauren Schutter has emerged with 176 kills and a .286 hitting percentage. Sophomore Kara Hafenstine has 36 aces, while senior Alexis Hafenstine is again one of the state’s top defenders. Alexis has 30 aces against just eight service errors, along with 497 digs (6.5 per set) and 330 service returns. Alexis has just four serve-receive errors all year.

Last year, Pittsburg Colgan entered the state tournament undefeated and finished fourth in 2A. Colgan is the heavy favorite in Northeast with a 38-2 record. The Panthers are the No. 1 ranked team in 2A and switched places with No. 2 Wabaunsee in this week’s poll.

Coach Cathy Oplotnik picked up her 400th career victory. Junior Millie Stockard is one of the state’s top players with 511 kills (5.5 per set). Junior Kaitlin Crossland has 321 kills (3.5 per set). Both hit at least .327. The Panthers have won 12 straight. Stockard has 1,083 attacks, second-most in Kansas.

Valley Heights went to the state tournament last year, though finished 0-3. VH is the top seed at Ell-Saline with a 33-4 record. Herington, after a big senior class graduated last year, has enjoyed another strong fall with a 27-6 mark. Valley Heights is ranked fourth in 2A. Herington coach Lisa Beye has battled cancer this fall. The top-three Herington hitters are all non-seniors.

Spearville was a top Class 1A favorite before the Lancers shifted to 2A when the latest classifications were released earlier in this fall. Spearville went to state last year and earned 1A runner-up to Centralia. The Lancers are the significant favorite in the Elkhart sub-state and have the only winning record. Spearville is ranked eighth in 2A. Ehlaina Hartman has committed to Emporia State for basketball.

One of the more intriguing sub-states comes at Leon-Bluestem. Belle Plaine (31-6) is seeded first, and West Elk (28-10) is second. WE is statistically the state’s top defense in digs per set.

Traditional power Hillsboro (19-18) is the third seed. No. 7 Leon-Bluestem is 10-21, but features standout junior Torrance Lovesee, who recently picked up a UTEP offer. BP is ranked ninth.

West Elk averages 30.4 digs per set, well ahead of second-place Frontenac at 25.4 digs per set. Junior Madelyne Koop leads the state with 666 digs.

Likely one of the more anticipated sub-state title matches should come between Sedgwick (36-1) and Garden Plain (27-9). These are arguably the top-two teams in 2A, especially on the west side of the state. Sedgwick is third and Garden Plain sixth in the latest 2A rankings.

Sedgwick features Grace Thompson, a Kansas State track commit. GP has Natasha Dooley, the reigning Class 2A volleyball player of the year. She has 264 kills (3.6 per set).

GP is the defending state champions in volleyball, girls’ basketball and girls’ track. Senior Kennedy Horacek is also on the short list for the state’s top liberos. After an all-state season last year, Horacek has 351 digs (4.8 per set).

Smith Center won the Mid-Continent League tournament championship last weekend and improved to 31-4 under longtime coach Nick Linn. SC is ranked fifth in 2A. The Redmen have five in a row.

No. 2 Ellinwood (31-4) is also a returning state qualifier. The Eagles finished 0-3 at state last year, though two of the defeats came via three sets.

SC has won 15 straight versus WaKeeney since ’07. The only time Smith Center and Ellinwood have matched up is a three-set Lady Red victory on Oct. 26, 2018.

The sub-state is full of star power with third-seeded WaKeeney-Trego (22-11) and fourth-seeded Hoxie (21-12). Trego features junior Lili Shubert, who is seventh in the state with a .435 hitting percentage. Hoxie has defensive specialist Addi Campbell. She has 500 digs, for 8.1 per set.

The JCN regional has No. 1 Jackson Heights (31-3), No. 2 JC North (29-8), third-seeded Oskaloosa (27-9) and fourth-seeded Maranatha Academy (19-14). Maranatha went to state last year and features one of the state’s top players in junior Addi Pelham, a commitment to NCAA Division I Lipscomb. Pelham has half her team’s kills at 468 (5.1 per set) with a .386 hitting percentage.

No. 1 seed Rural Vista (36-4) headlines the sub-state. Rural Vista has been the No. 1 team in 1A the last several weeks. In the regional championship, Hannah Riedy had her 1,500th career assist and 1,000th career dig, and Holly Brockmeier delivered her 1,000th career kill.

Two-time defending state champion Centralia (32-6) is the top seed. Beloit-St. John’s/Tipton (31-8) is also in the sub-state. BSJT coach Marcy Kee has 391 career victories, and the Blujays reached the state tournament last year. Centralia is ranked second, and the Blujays are ninth.

Minneola (30-8) is the top seed, but No. 3 Little River (29-9) and No. 6 Attica (32-8) pose an excellent first-round matchup. LR and Attica are sixth and seventh in the respective rankings. Little River sophomore Lily Boughfman has 301 kills, while Leah Ayers has 180 kills. Three players have between 53 and 55 aces. Little River and Attica have not matched up in recent history.

No. 1 Cunningham (33-6) has played well as of late and has moved into the rankings. The Wildcats vaulted from eighth to fourth in the latest poll.

No. 2 Wheatland-Grinnell (31-7) reached the state tournament last year after a slight surprise upset versus an experienced Victoria team in the sub-state championship game in Ransom. W-G was first in ’15 and second in ’16 at state. No. 3 Central Plains (27-11) and No. 6 Thunder Ridge (32-6) match up in the first round.

TR took an upset loss to Logan in the regional championship. Thunder Ridge had moved from sixth to third in the rankings. TR senior Jaden Boden has 327 kills. TR and W-G have not played since 2010, and Thunder Ridge has not faced Central Plains. TR leads Kansas with 330 aces.

Golden Plains is the top seed at 31-6, but has dropped back in the rankings in the last two weeks. Logan (23-12), Victoria (21-13) and Wallace County (23-13) are part of a balanced sub-state. GP dropped from ninth to tenth in the recent poll. Golden Plains lost twice on Oct. 15, though is 7-1 since. Golden Plains defeated Logan in three sets on Sept. 3.

Chetopa stands at 36-5, though traditional power Goessel (19-18) and Udall (24-14) stand on the other side of the bracket. Chetopa jumped two spots from eighth to tenth. Senior Samantha Blundell has 440 kills (4.9 per set) with a .441 hitting percentage.