v Faces in KS: Cole Coggins - Sports in Kansas 
Warning: include(../includes/bodytag.php): failed to open stream: No such file or directory in /home/kansass/public_html/ks/news/index.php on line 36

Cole Coggins is having a huge year in 1A for Valley Heights (photo: Hunter Chase) 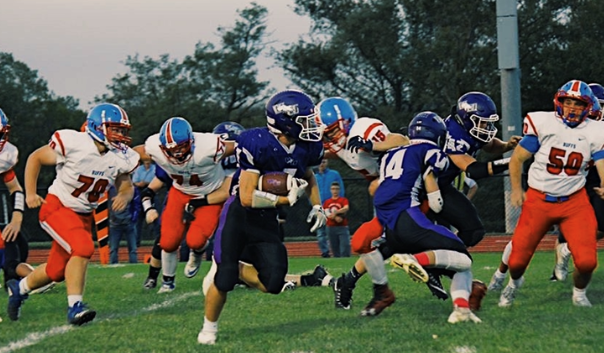 When it comes to small school running backs, one that jumps off the page in the stat columns at Sports in Kansas has been Valley Heights senior Cole Coggins.

Coggins isn’t the biggest guy in the world at 5-foot-10 and 165-pounds, but he is the star in head coach Tony Trimble’s triple option rushing attack.

Coggins has earned all-league and all-state honors at running back for the Mustangs who currently sit at 6-1 and are one of the highly regarded 1A teams this season in the state. Coggins has rushed for 1,063 yards this season in seven games. He is averaging over 10 yards per carry with 18 total rushing touchdowns. Last season as a junior he rushed for 1,336 yards with 20 touchdowns. As a sophomore he had 1,288 yards with another 19 scores. He has been one of the most consistent players in the small school ranks over the last three football seasons. Valley Heights is averaging 359 rushing yards per game in 2019.

This season Coggins and his teammates are also playing for Lew Whitson. Whitson passed away in a car accident last summer and was an assistant coach at the school.

“The goal for the whole team is to get Valley Heights to a state championship this season and make coach LEW Whitson proud.” Coggins said.

The squad returned nine starters on each side of the football from a team that went 6-4 in 2018. Coach Trimble is also no stranger to state title games as he took second as the head coach at Neodesha back in 2001, losing in a heartbreaker to Conway Springs.

In addition to Coggins, the Mustangs feature much more. Cameron Beardsley has been a playmaker on both sides of the ball and a big season at quarterback. The line is led by Tyler Wagner while Jake Yungeberg is the lead blocker at fullback for making Coggins life easier as the running back. Evan Haines has had a  big year in leading the team in tackles from his linebacker position as well as solid overall defensive line play.

Valley Heights will first have to take care of business in week nine of the season as they take on traditional state power Centralia in the last week of the regular season before playoffs begin next week.

We caught up with Coggins below in the latest Q&A edition of Faces in Kansas.

This feature is presented by Yungeberg Drug, proud to support Valley Heights Athletics. Best of luck this season!

I started playing tackle football in 4th grade, but being from a small town everybody that I looked up to used to play football.

The goal for the whole team is to get Valley Heights their first State Championship and make Coach LEW Whitson proud, who passed away in a car accident this last summer.

Yes, we have been working hard, have lots of returning starters, and have more depth at most positions.

I look at myself as confident, quick, and have good vision of the field. I am also always striving to get the “extra yard”.

Many people have said that the precision running game is fun to watch, because you aren't sure who has the ball.

The other key players on offense is the whole offensive line, led by Tyler Wagner. Our Quarterback Cameron Beardlsley who is able to make the correct reads, and Jake Yungeberg, who is our established fullback. The key players on defense are the linebackers, led by Evan Haines and also the defensive line.

When playing football, as long as you have the mentality to get the job done, you don’t need to be athletic to be successful. Another thing that I love is the neverending bond you get with your teammates.

I play varsity point guard in basketball, and play baseball in the summer.

When playing under coach Trimble and coach Lee, you have to realize that they are coaching you hard because they know the potential that you have. They often say that you should only worry when they “aren’t saying anything to you”. Some people pick up on their way of coaching quick, and some people don’t realize what they were doing until they are out of high school.

I am interested in playing college football and have talked to a couple of NAIA coaches , but I am undecided on where I am going to go.

My favorite thing to do when I’m not playing sports is either hunting, or trying to find something to do with my friends.

It's hard to say where I will be in 10 years, but hopefully I am financially stable and healthy.

My favorite subject is school is government and I’m the student that likes to have fun in class, but knows when to be serious and get my work done and turned in. My cumulative GPA is a 3.5.

My grandfather Kenny Coggins is my role model. He has always set a good example for my family and is also widely known around Marshall County because he was a greatly respected Sheriff, and he has helped a lot of people around the community.

The only place to eat around Waterville/Blue Rapids is a new restaurant named My Sisters Kitchen, but before that was introduced Highway 9 in Frankfort is always a good choice.

Monkeys are my favorite animal.