v Sports in Kansas: Volleyball Notes 6A, 5A, 4A -10/22/19 - Sports in Kansas 
Warning: include(../includes/bodytag.php): failed to open stream: No such file or directory in /home/kansass/public_html/ks/news/index.php on line 36

Lansing Volleyball is having a solid year as expected under legendary coach Julie Slater. 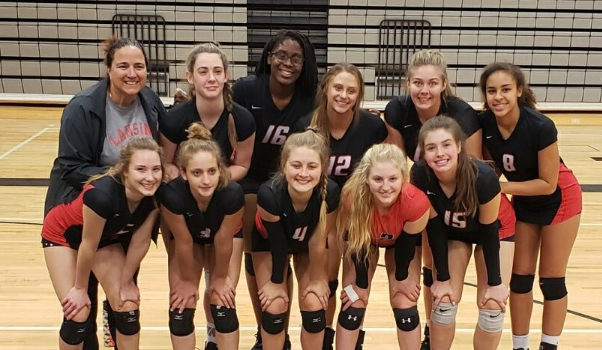 KSHSAA released Class 4-6A sub-states for volleyball Monday morning. The smaller classes will be released Wednesday, and Sports in Kansas will have a preview of those classes later the week. All records below are as of sub-state seeding, unless otherwise noted.

On the east side, Blue Valley earned the overall No. 1 seed with a 26-8 record. BV is part of a sub-state where no team is better than 18-15. Blue Valley is ranked first in 6A. Blue Valley’s top-three hitters are all seniors with Evelyn Diederich, Lindsay Lahr, and Addy McAleer. Diederich has committed to South Dakota. She leads the team with 316 kills, 48 aces and 180 digs. Lahr, a Missouri State commit, and Diederich are first and second in blocks. The top-six diggers have between 105 and 180 digs.

No. 2 Blue Valley North (23-8) leads sub-state No. 2. Blue Valley West is the seventh seed at 20-13. North is ranked third, and BVW moved into the rankings this week at No. 10. Blue Valley North defeated Blue Valley West, 2-0, on Sept. 26. BVN has won three straight in the series. BVN has great depth with its top-four hitters with 129 and 142 kills. Sophomore Jasmine Dulan paces the squad. Senior Grace Reininga leads the team with 46 aces.

Senior Morgan McIntire, a Fort Hays commit, leads the team with 356 kills (4.7 per set). The next four hitters are all non-seniors, including junior Kendra Wait, a Creighton volleyball commit and the reigning Kansas Gatorade Track Athlete of the Year. Wait carries an excellent .397 hitting percentage with 95 kills, paces with 37 aces and is second with 90 blocks. G-E is also a very strong serving team with a plus-53 between aces and service errors.

Amy Hoffsommer has done an excellent job turning around the brand-new OW program. The Owls went 3-32 and 10-35 in its first two seasons. Ava Testrake is one of the state’s best freshman. She leads the team with 255 kills, along with a .291 hitting percentage and 50 aces.

SMNW, Mill Valley could have rematch

In sub-state No. 4, Shawnee Mission Northwest (26-10) and Mill Valley (24-12) are expected to play in the sub-state title game. Northwest is ranked eighth, and Mill Valley dropped five spots back from second to seventh. Mill Valley defeated SMNW, 2-1, on Sept. 4. SMNW junior Reanne DeBose has enjoyed an impressive season with 365 kills (4.1 per set). Freshmen Tori Creason and junior Audrey Bennett both lead the offense.

On the west, Garden City (30-3) carries the best overall record in the classification. GC is the only team with a winning record in sub-state No. 1. GC bumped up a spot from fifth to fourth in the rankings.

Washburn Rural (34-5) is heavily favored in the second sub-state. Junction City (19-16) is the only team with a winning record. Rural is ranked second in 6A. Washburn Rural has five freshmen with significant playing time on varsity.

Three players – junior Sophie Connor, senior Jalen Keener, and sophomore Tatum Boettjer - have between 223 and 245 kills. Senior Sydney Nilles, a Newman basketball commit, leads with 812 assists (9.7 per set). Connor leads with 387 digs, and senior Heather Mills has put together another strong season with 318 digs. Both average at least 3.8 digs per set.

FS had lost three in a row to Lawrence, but swept its city rival, 3-0, on Oct. 8. Free State has been over .500 for the last five years, including 23-15 last fall. Senior Kaitlyn Hamilton has 162 kills with a .288 hitting percentage in the team’s latest release.

Class 5A has enjoyed a banner year, and that includes three very quality teams in west sub-state No. 1 with top-seeded Maize South (34-2), No. 8 Wichita Northwest (24-14) and ninth-seeded Hays High (20-12). Maize South is fifth in the 5A rankings and was the last team in Kansas to suffer a loss. Maize South has two of the state’s best players in senior Erica Fava and junior setter Laurel Jones. Fava has 346 kills with a .327 hitting percentage, along with 71 kills.

Jones carries 120 kills with a .349 hitting percentage and 818 assists. She is a Marquette commit. Maize South has won two in a row versus Northwest. Hays High features Tasiah Nunnery, who is a former WAC Player of the Year and has more than 1,000 career kills.

Sub-state No. 2 could feature City League rivals Bishop Carroll (31-6) and Kapaun Mt. Carmel (24-10) in a 2-7 matchup. Carroll bumped up a spot from ninth to eighth in the latest rankings. Carroll has won five straight versus KMC, including two this year.

Spring Hill up in rankings with Stevenson

The east side is also loaded with plenty of the state favorites. Spring Hill (34-2) leads sub-state No. 1, along with No. 8 Pittsburg (23-11) and No. 9 Bonner Springs (22-14). Spring Hill is ranked second in 5A. Coach Erica Book has led SH to a 77-13 advantage in sets won. Spring Hills’s only losses have come to Blue Valley Southwest and St. James. SH has defeated Bonner Springs twice this year and has not faced Pittsburg since ’14.

Junior Jalyn Stevenson, a Washburn commit, has 362 kills and a .346 hitting percentage to lead the team. All but 14 kills have come from non-seniors. Junior Alli Frank has 80 blocks. SH is one of the state’s most efficient teams with a .294 hitting percentage.

Marea Wortmann, a Benedictine commit, earned MaxPreps state player of the week honors for the week of Oct. 14-20. She delivered 11.1 assists over 20 sets, along with 48 digs and 13 aces. Senior Anna Feldkamp has enjoyed a big season on a depth-laden squad with 286 kills and a .365 hitting percentage. Senior Ellie Bolton paces with 441 digs (5.9 per set). Feldkamp has committed to Loyola of Chicago, and Bolton to Creighton.

No. 3 Lansing (28-4) has enjoyed a big season behind legendary coach Julie Slater. Three of the four teams in sub-state 3 have a winning record, including No. 6 Shawnee Heights (26-8). Lansing is fourth and Shawnee Heights is sixth in the poll. The Lions lost twice to Aquinas and once to Washburn Rural. Lansing has won 23 in a row. On Oct. 15, Lansing defeated Shawnee Heights, 3-1, to win the United Kansas Conference. Lansing went undefeated through the UKC. Lansing freshman, JV and varsity all won league titles for the second straight year.

Middle hitter Caroline Crawford, a Kansas commit, missed part of the season early on because she played on the U.S. national team in Egypt. Since her return, the Lions have not lost. Of Lansing’s 28 victories, 17 have come versus ranked teams. Lansing is loaded with talent. Outside hitter Karli Schmidt is the reigning 5A Player of the Year and has also committed to Kansas.

Outside hitter Samantha Moburg has committed to Washburn. Middle blocker Amelia Van Der Werff has committed to Middle Tennessee State, and setter/right side McKinzie Weaver has committed to Newman. Coach Julie Slater is No. 2 all-time in wins in Kansas history and has more than 900 victories.

Aquinas junior Caroline Bien and senior Caroline Zabroske have tallied 268 and 244 kills, respectively. Both each carry at least a .326 average. Bien has committed to Kansas. Zabroske is a four-year varsity player and is the Saints’ all-time leader in kills. Senior Annie Rokusek will play for Central Missouri.

Indy leads 4A in winning percentage

Independence has the top overall record on the east side and paces sub-state No. 1 with a 31-3 mark. No other team in the sub-state has a winning record. Indy moved from sixth to fifth in the 4A rankings.

Louisburg and Miege in rematch of last year’s finale

Sub-state No. 2 leads with Atchison (26-12), though No. 10 Bishop Miege (14-20) is the favorite and gets a great first round matchup with No. 7 Louisburg (18-15). Miege, which plays a highly challenging schedule, is third in 4A. Miege is the defending state champion and won the title last year with a 26-16 record. Miege defeated Louisburg in the championship, while Hayden beat Andale for third place.

Louisburg is ranked fourth in the poll and has five attackers with between 130 and 187 kills. The Wildcats’ top hitter is junior Carleigh Pritchard. Sophomore Corinna McMullen paces with 66 aces and has one of the state’s top ace percentages at 16.5. She is tied for 13th in aces, according to MaxPreps statistical lists.

Miege is 7-1 against Louisburg since 2013, including three straight victories. The Stags defeated Louisburg, 2-0, on Oct. 5. Miege opened the season 0-5, though lost to Washburn Rural, Gardner-Edgerton, Blue Valley, and Blue Valley North, all ranked in the top-six in 6A. In its last match, Miege defeated Olathe West, 2-0.

Miege carries a .123 hitting average, and junior Ella Martin paces the squad with 172 kills. Junior Payton Verhulst, who led the Stags with 297 kills as a sophomore, is one of the best basketball players in the country and holds dozens of Division I offers. She is not on the volleyball team this fall after a first team all-state season in ’18.

Eudora paces sub-state No. 3 with a 23-13 mark, and Topeka Hayden (23-14) is the state favorite out of sub-state No. 4. Hayden is second in 4A, and Eudora was not ranked in the poll before it moved to tenth in the latest rankings.

Eudora has captured exactly 23 victories the last three seasons. Eudora is 0-3 against Hayden in the last four seasons, including a 2-0 loss this fall. Eudora senior Keagan Shockley has enjoyed a big season with more than a third of her team’s kills.

No. 1 Andale experienced, one of the top contenders

Towanda-Circle leads sub-state No. 2 with a 29-6 record. Circle remains seventh in the 4A rankings. This marks the third straight year of wins improvement for the Thunderbirds. Circle is 21-16 and 26-13 the last two years.

Balance in sub-states 3 and 4

No. 3 Holton (26-11) is the top team in sub-state No. 3, that also features traditional powers Abilene (24-13) and Rose Hill (12-22). Holton improved from tenth to ninth in the latest 4A rankings. Rose Hill reached the state tournament last year and won its two seasons ago, but graduated Gracie Van Driel, now playing at Kansas.

In sub-state 4, Chapman is 23-10, and Nickerson stands at 24-12. The teams had big changes in the poll. Chapman bumped from eighth to sixth, while Nickerson fell from fourth to eighth.