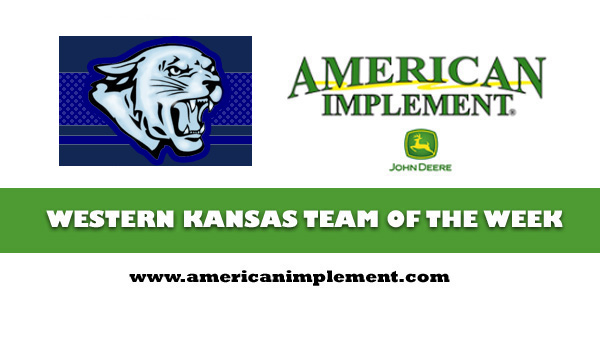 On Friday, Cheylin traveled 174 miles to Natoma, a squad that had averaged more than 40 points a game. The contest started at 6 p.m., an hour earlier than the standard game time.

Cheylin, helped by standout junior quarterback Colton McCarty, junior Andrew Schields, and its strong supporting cast, went 4 of 4 on fourth downs. That included a 4th-and-13 conversion, a 4th-and-goal that yielded a touchdown and a 4th-and-10 from its own 15-yard line that produced a 65-yard touchdown pass.

The Cougars led 33-6 with 27.1 seconds left in the first half when the contest was delayed because of lightning in the area at 7:10 p.m. The teams walked down the hill and filed into the locker rooms located side-by-side across the street from the high school. The lightning and rain continued unabated.

During the break, Cheylin players went through their phones and watched video of other games on Open Spaces Sports, a well-known media service in western Kansas.

“Just kind of hoping to get back out there,” Schields said.

Cheylin did present an option to call the game, but Natoma, which had scored just before halftime, wanted to finish. Natoma had run just two fewer plays than the Cougars in the first half. Dunlap called the scenario “kind of a scheduling nightmare.”

The game had significant playoff seeding implications. While most delayed games resume at the same site Saturday or Monday, Cheylin did not want to take a repeat trip to Natoma.

Instead, the teams settled on playing in Rexford, a six-man field. Bird City is 73 miles from Rexford, while Natoma had to travel 107 miles. The game reset at 5 p.m. on Saturday when Cheylin tallied three quick touchdowns and won by mercy rule, 53-6.

Cheylin has just one senior listed on the roster, 240-pounder Miguel Gonzalez, though he was lost for the season earlier in the fall. The Cougars stand at 7-0 and 2-0 in the 6-man North Division.

Schields said many of the tight-knit junior classmen have played football together since third-grade recess.

“The whole team works together,” he said. “Everybody has got each other’s backs every play. It’s a great team to be a part of.”

Moscow is 7-0, 4-0 in the South Division. While the North and South do crossover for some games, Cheylin and Moscow don’t play each other. Six-man regular season ends this week with the Wild West Bowl championship game again in Dodge City in November.

This is the fourth year that six-man football will have the championship game. Weskan, Pawnee Heights and Weskan have won the first three titles.

Cheylin has outscored teams by an average margin of 58-14 and closes out the regular season home versus Weskan (5-2, 2-1).  The Cougars have a slight lead in six-man offense, ahead of Ashland (54 points/game), Golden Plains (53) and Weskan (52). However, the Cougars also lead in six-man scoring defense.

Moscow is second with 18 points permitted. All the other six-man contenders, Ashland, Weskan, Pawnee Heights, Natoma and Golden Plains, have all allowed at least 26.7 points per game.

Last year, the Cougars finished 4-3 and scored 60 points a contest but permitted 55. Cheylin allowed 92 points twice and 118 once. The Cougars took fourth in ’16, second in ’17 and third last year.

“That was the side of the ball that they really needed help on, because they don’t have a lot of weaknesses on offense, especially Colton,” Dunlap said. “They can score in a bunch of ways.”

“We just have to have that mentality we are going to stop you, because that’s what’s going to happen,” Colton McCarty said. “That’s just kind of the mentality we have this year. Our defense has been playing really good, and we are just in the right positions this year. We practice defense a lot, so it’s making it a lot easier in the games.”

While several ranked teams, including Wichita Northwest (No. 2 in 5A) have enjoyed big defensive turnarounds, no undefeated squad has had the defensive change like the Cougars.

“We do a lot on defense everyday in practice,” Schields said. “We go over schemes. We go over everything coach talks about. We work hard, and we praise defense. Great defense leads to easy offense, and we feel like that’s a great way to get anything going.”

“Our motto is if we can play defense, it just scares other teams just because our offense, teams know that we are going to score,” McCarty added.

Natoma, which had to forfeit games two years ago because of lack of numbers, has enjoyed a nice turnaround under Dunlap, a Tiger alumnus.

“Two years ago, where we still have about the same amount of numbers in our high school, football was just not popular,” Dunlap said. “It just wasn’t the thing to do, and to have the numbers, obviously that breeds competition, and you’ve got kids, just the camaraderie part of it, just believing in themselves.”

Natoma had scored at least 26 points in every contest, including a 65-61 comeback victory versus Weskan when the Tigers trailed by more than 20 points. Natoma (4-3, 2-2 North) is in strong position for its first winning season since a 5-4 mark in ’13. Before then, the Tigers’ best season was a 6-3 mark in ’08.

Cheylin led 19-0 after the first quarter and 33-0 before the Tigers tallied the last points. McCarty, the only six-man player at the prestigious summer Sharp Performance Combine in Salina, has become the classification’s best player after Pawnee Heights’ Kade Scott graduated. McCarty has fought an AC joint issue in his shoulder the last two weeks.

Overall, he has completed 57 of 84 passes for 810 yards with 15 scores against two interceptions. He has 101 rushes for 1,482 yards and 24 scores. Schields has 33 catches for 425 yards and nine scores, while juniors Tyler Sabatka and Alex Dart have combined for 31 catches, eight for touchdowns.

Sabatka and junior Joe Melton lead the Cougars with 60 and 43 tackles, respectively. The Cougars have forced 19 turnovers. Last year, Melton led the squad with 75 stops, while Sabatka had just 13 tackles in four games. The Cougars forced 11 turnovers.

“What makes us dangerous is you can take (Colton) away, and we can still beat you with the other guys that we have got,” Walden said.