v Faces in KS: Jenna Pfau - Sports in Kansas 
Warning: include(../includes/bodytag.php): failed to open stream: No such file or directory in /home/kansass/public_html/ks/news/index.php on line 36

Jenna Pfau is a player to watch in 2A volleyball at Osklaoosa. (photo: Molly Harmon) 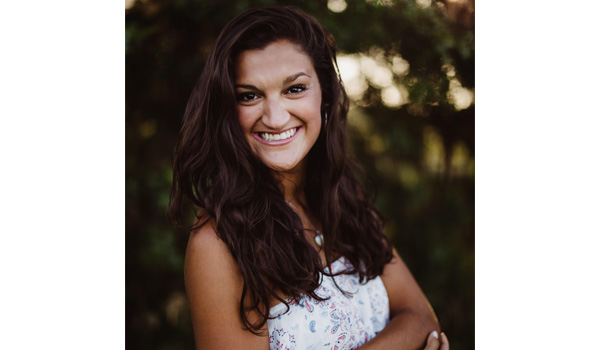 Oskaloosa High School outside hitter and middle blocker Jenna Pfau has had a very solid four-year career for the Lady Bears.

The 5-foot-10 senior is among the leaders in kills statewide this season with 296 but she’s much more than that to her high school volleyball team. She has also delivered 378 digs, 35 assists, 16 aces and 60 blocks this season. Last season, she was among the area leaders in kills and has been a three-time Northeast Kansas League first team pick with the 2019 team not yet picked.

She also gets it done in the classroom with a perfect 4.0 GPA. Pfau is a Kansas Honors Scholar and is ranked #1 in her class. She plans on playing at Highland Community College at the next level for volleyball where she plans on advancing her game and hoping to get a four-year college offer after two years.

Pfau also plays basketball and track at the school. Last season she was an all-state honorable mention pick from Sports in Kansas. She was also among the area leaders in rebounding last season in basketball.

Oskaloosa, led by head coach Shelbie Morgison, is off to a solid season with a 25-9 record, including a 12-2 in league play. Twins Reece Curry (libero) and Reagan Curry (setter) have also had huge season for the Bears and help set the pace for the team. The two are also highly regarded all-state softball players. Jaycee Johnson also has 153 kills while Deja Messalle has 145.

Oskaloosa will be back in action next Tuesday against Horton and Maur Hill. Sub-State brackets have not been set but Oskie will be in the 2A sub-state at Jefferson County North in Winchester w/ Horton HS; Jackson Heights HS; McLouth HS; Prairie Village-Kansas City Christian HS; Shawnee-Maranatha Christian Academy; Wathena-Riverside HS; Winchester-Jefferson County North HS

This feature is presented by Malsbury Electric. Proud to support Oskaloosa Athletics. See our ad in the right corner or give us a call at 913-683-8899.

I think I actually initially became interested in volleyball because my mom was always coaching, so my brother and I were always at practice with her as her little “gym rats”. I also grew up watching my older sister, Haley, playing all of her sports, and she and her teammates were always so fun to watch. They were especially successful in volleyball, going to state 3 years and winning it her junior year of high school; I will never forget how exciting and magical that was!

First of all, we really want to be league champs this year in volleyball. Secondly, we of course would love to be substate champs and make it to the state tournament also. Like I mentioned earlier, I think there is just something special and magical about competing in the state tournament with your school team, and I would LOVE nothing more than to experience that with my teammates, coaches, and community.

I think we definitely have the potential to make a run at state this year; we have all the pieces, we just have to play with energy and confidence to make it happen.

I like to think that I bring positive energy and leadership, as well as a genuine love for the game. My goal is to go into every game making smart plays, seeing the floor, and doing whatever might be needed to keep the momentum on our side.

I’ve been at Oskie since Pre-K, and I have a lot of pride in our school and community. It’s always great to see familiar faces in the stands and know the families on a personal basis.  The school and community is always very supportive of our teams, in both the good times and the hard times, and it is always exciting when we can come together to celebrate when hard work pays off. As my dad always says, “It’s great to be a Bear!”.

I think we are a really fun team to watch this year. We have some scrappy players that love to make big hustle plays. We play for each other and are excited for each other when someone makes a big play. There’s nothing better than an amazing dig that ends in a big kill!

Oh gosh. I feel everyone is key, from the players on the floor to the players on the bench, everyone has an important role to fulfill for the success of the team. Reese Curry has been amazing at libero, and Regan Curry has done a great job at setter, making smart decisions in distributing the ball to different hitters. We have been fortunate to have Jaycee Johnson back this year after an ACL injury had her out last year. She and Deja Messalle have been huge additions to the Varsity lineup on the front row. Lindsay Schupp is a great passer and has played multiple front row positions, just wherever we have needed her. Emma Caldwell and Trinity Malsbury have really stepped up to fill a position after we lost Sophia Rockhold to an injury early in the season. All in all, this team has just played with a lot of heart.

Well, I’d be lying if I didn’t say that I love to get a big kill or block to win the point, but I also love to get a dig that keeps the ball in play. But ultimately, the thing about volleyball that I think is amazing is when your team pulls together when things get mentally tough, as they often do in this game!

I am also involved in basketball and track; I’d say basketball is my next favorite sport, although I really like throwing the javelin, too. I think rebounding is probably my strongest skill that I bring to the basketball floor. I just learned how to throw the javelin my sophomore year, and I’m hoping to continue to improve in that this spring.

Coach Morgison is very passionate about what she does and brings so much hard work and commitment to the program. I have so much respect for her and appreciate all that she has done and continues to do for us. She has a young family at home, and she sacrifices so much of her time and energy to help make us be the best team we can be, and we’d love nothing more than to make her proud and reward her hard work by making a run at state. I realize how lucky we are to have her, and she cares so much about not only making us great players, but also great people. I just love her and her family!

We participated in a summer weights and conditioning program that was supervised by our coaches, which also included open gym opportunities as well as a team camp and clinic that we put on for elementary students. Our coaches also had us play in a couple of summer tournaments.

I actually just recently verbally committed to play at Highland Community College. I aspire to hopefully continue to develop my skills and improve my game in hopes to be recruited and continue on at a 4-year college.

I enjoy spending time with my family and friends just relaxing; sometimes it’s great just to do nothing!

I hope to be well into my profession as a nurse, married, starting a family, and living locally near my family. I just hope to be living my best life! :)

My favorite subject in school is any class that involves life science or human anatomy. I like to think that I’m a very conscientious student and I take school and my studies very seriously. I currently have a 4.0 GPA, which I hope to carry into graduation, am a Kansas Honor Scholar, and am ranked 1st in my class.

It’s impossible for me to choose just one role model. Both of my parents, my older sister, and my older brother all have taught me different and important things that have helped me become who I am. They all challenge me and push me to get out of my comfort zone while also being my biggest fans; I couldn’t be more grateful for their love and support.

Gambino’s Pizza and Fajitas Mexican Restaurant are two of the places that you can often find me, however there are probably lots of other good options in the area!

Hmmm. Well, I don’t like ice cream and that seems to amaze most people.