v Faces in KS: Riley Cummings - Sports in Kansas 
Warning: include(../includes/bodytag.php): failed to open stream: No such file or directory in /home/kansass/public_html/ks/news/index.php on line 36

Riley Cummings has had a breakout year for BV West on the way to 4-2 mark. 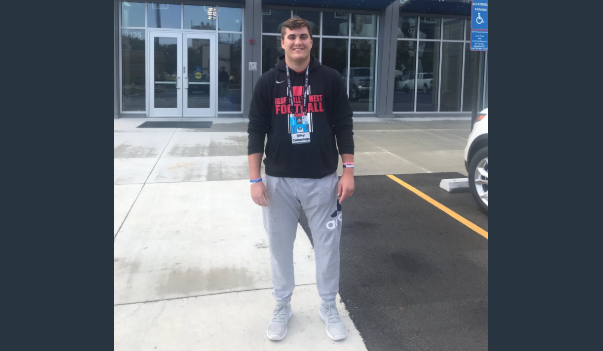 Blue Valley West’s Riley Cummings was part of an elite group who started as freshmen on a Class 6A team. Cummings delivered 75 carries for 357 yards and a score. He was one of four 6A freshmen to start back in 2016, joining Topeka’s Ky Thomas, Garden City’s Refujio Chairez, and Dodge City’s Jashon Taylor.

Three years later, Thomas is a University of Minnesota commit and just broke the city of Topeka’s all-time rushing record. Chairez has gone viral online with his squats and committed to Missouri Southern. The duo is multiple first team all-state selections. Taylor led Dodge City in tackles and was first team all-conference in ’18 and they are off to a 6-0 start in 2019.

Cummings has rarely played since when counting 2017 and 2018.

To open the 2019 season, the 6-foot-1, 215-pound Cummings returned to the gridiron and enjoyed the first 100-yard performance in BVW’s 28-21 upset versus Mill Valley, ranked No. 4 in the preseason Class 5A rankings. Cummings collected 23 carries for 168 yards and four scores. He has been one of the best players back from injury in the state this season as he has collected 639 yards with 10 touchdowns on 129 attempts this season for the Jaguars in the first six games.

Cummings has the size and physical ability to play at the next level as well on either side of the football. He also gets it done in the weight room with a 300-pound bench press and 450-squat.

More importantly, the Jaguars are 4-2 this season and could certainly be a factor in the 6A postseason.  They returned 10 starters on offense and 11 starters on defense for this season. Their only two losses this season have came to Aquinas, last years 5A champ and #1 in the state, and Miege, last years 4A champ and #1 in the state. BV West has beat Mill Valley, St. James, BV North and BV Northwest this season. BV North was last years 6A runner-up. The Jaguars were just 3-6 last season, 1-8 in 2017 and 2-7 over Cummings freshman season in 2016.

Head Coach Josh Koerkenmeier has done a great job in the turnaround in the program. People outside of the league just don’t realize how hard it is week in and week out to play several championship contenders. There’s going to be a team around the .500 mark every year that can compete to go deep into the playoffs. We have seen two Eastern Kansas League teams with four losses win a state title in the last four seasons (2016 Mill Valley, 2017 Blue Valley).

Cummings also gets the opportunity to play with his twin brother Jake Cummings, who is a strong safety and has made big plays all over the field this season. Ise Summerlin is also a rising prospect that has had a big year for the Jaguars. Offensively, David Brown is one of the top weapons in the state at wide receiver. Greg Riddle has also thrown for over 800 yards at the quarterback position this season. Tommy Cook has led the defense with over 40 tackles this season.

BV West is back in action this Thursday as they take on Blue Valley Southwest. We caught up with Cummings below in the latest Q&A edition of Faces in Kansas.

I started playing playing tackle football in 2nd grade. I always loved the sport and it’s been my favorite sport since then.

Yes, I believe we have enough talent in our starters and we have a lot of depth this year especially on defense.

The atmosphere is awesome every home game we about fill up the DAC (our home field) we always have an amazing student section an a overall big crowd.

You’ll see a varsity team that hasn’t had much success in the past years and we really came together this year and we are making things happen!

My twin brother Jake Cummings he is a strong safety and he seems to be everywhere on the field making a number of tackles. Ike Summerlin is a really tough defensive lineman to stop. David Brown at WR is tough to stop out there because of his unique speed.

My favorite thing about football is the brotherhood that forms with your team. No sport compares to the brotherhood football makes because we are with each other almost every single day of the year doing something. We have seen the good and the bad times together and we always stick together.

I’ve played baseball all my life unfortunately last year I couldn’t play because of my knee injury. I play center field and pitcher.

Playing for Coach Koerkenmeir is great our team knows he’s always going to be straight forward with us and tell us how it is. I feel we really respond to it  good because we know it’s time to get back to work. Coach has taught us many ways to be a leader and why leader are affective on a footballl team. He taught us many life lessons through football that we will all take forward with us.

We lifted did OTA’s and conditioned 4 times a week for 2 hours a day in the summer and lifted all spring and winter.

I am seeing interest in some d1,FCS, and D2

Watch sports with the  football team

Math, I am a good student who pushed myself into taking hard classes and really challenging myself 3.4

My role model is my dad he is a really hard worker and he is the reason why I started to love football so much because we was the head coach of my youth team.

I am really interested in a lot of things