v Sports in Kansas: Statewide Volleyball Notes - 10/15/19 - Sports in Kansas 
Warning: include(../includes/bodytag.php): failed to open stream: No such file or directory in /home/kansass/public_html/ks/news/index.php on line 36

Jeff County North won the Riverside Tournament for the sixth year in a row. 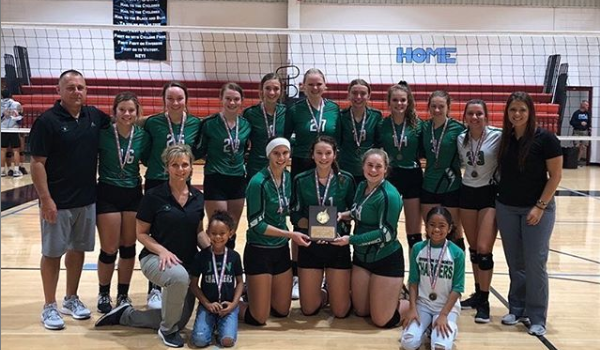 At 10 a.m. Wednesday morning, KSHSAA will release the 1A regional fields. There was little shakeup in the 1A poll last week. No new teams entered the poll, though a few squads shifted one spot.

Rural Vista (25-3 at time of poll) and Centralia (21-5) continue to hold down the top-two positions. Flinthills, Thunder Ridge, Golden Plains, Attica, Beloit/St. John’s-Tipton, Little River, Chetopa and Lebo round out the top-10. By winning percentage, Golden Plains was leading at 21-1 when the poll was released, but now stands at 23-3.

GP hosts its own regional and lost to Rawlins County and WaKeeney-Trego, which has been ranked in 2A. Rawlins County is the second seed at the Golden Plains regional with an 18-9 mark.

Centralia, now 23-4 according to KSHSAA’s updated results after weekend action, is the significant favorite in the Axtell regional. The Panthers are the only program above .500. Centralia has captured the last three 1A state championships.

Host Beloit/St. John’s-Tipton (24-5) paces its own regional. Lincoln stands at 19-10, and Sylvan-Lucas is 17-9. BSJT has defeated both teams. The Blujays have a five-match winning streak entering Tuesday’s key triangular at Thunder Ridge. BSJT and TR have split two meetings this year.

1A Central Plains regional with parity

O-B, led by senior standout Maddie Wiltse, a Nebraska-Kearney basketball commit, is 1-1 against Central Plains this year. O-B has won three in a row after five straight losses, and gets Ellinwood and Kinsley on Tuesday.

Goessel, under Crysta Guhr, one of the state’s top coaches, leads its own regional with a 14-13 record, the only team above .500.

At Moscow, Montezuma-South Gray (23-9) has seven more victories than any other team. SG has two losses to 3A Cimarron and three to 2A Spearville.

At Greeley County, perennial power Wheatland-Grinnell (20-7) is the No. 1 seed. W-G challenged itself early, including an early season Hays tournament and losses to WaKeeney-Trego. However, the Thunderhawks have won eight in a row.

The Junior Blues shifted from second to third in Class 6A poll last week. Blue Valley stayed first, while Mill Valley made a sizable jump from sixth to second. On Saturday, WR won the Derby tournament that had multiple ranked teams. Washburn Rural is 26-3.

Coach Kevin Bordewick said 5-foot-10 sophomore Katelynn Brogan was the third setter in a 5-1 that WR used at Derby.

Washburn Rural normally uses a 6-2, but one setter is out with a concussion and the second one is sick. Brogan had two days of practice and had never set before. Brogan was part of the 6A state basketball championship team last winter and had played well on the right side.

Washburn Rural is significantly playing five freshmen on varsity, including 5-7 Alysa Ladsen, a three-sport athlete who also participates in basketball and softball.

Senior 6-foot-1 middle hitter Macy DeLeye is headed to Drake for volleyball. Senior defensive specialist/libero Eisa Mondragon will play volleyball at McCook (Neb.) Community College. DeLeye is a four-year starter, and Mondragon is in her second year with WR – and second season as a starter.

The Mavericks were the last unbeaten team in Kansas with a 25-0 mark at the release of last week’s poll. Maize South continues to stay fifth in Class 5A. The Mavericks took its first defeat in a triangular at Valley Center on Oct. 8. Maize South lost 25-22, 25-20 to Andover.

On Oct. 10, the Mavericks defeated Wichita Trinity, 2-0. Trinity is ranked third in 4A.

At the Derby tournament, Maize South swept Wichita Northwest, Arkansas City, Derby, Wichita Heights and then look the 2-0 loss to Washburn Rural. The Mavericks are still a highly impressive 34-2.

The top-three and four of the leading five hitters are seniors with Erica Fava, McKinley Pruitt, Carley Sterneker and Holly Price. Fava has 4.1 kills per set with a .325 hitting percentage, while Pruitt is at 2.9 kills per set with a .340 average. Fava continues to lead the team with 68 aces and is second with 236 digs for one of the best all-around seasons in the state.

Frontenac has captured 18 straight victories and stands at 26-3 under coach Cassie Rhuems. She has had great success with the Frontenac softball program with a pair of state titles, including last spring. Frontenac is 10-2 at home and has a 57-8 edge in sets won. The Raiders stayed sixth in Class 3A.

Senior Karma Fields, the reigning Class 3A Softball Player of the Year, has 196 kills for 3.1 kills per set. She is at an efficient .289 hitting. Sophomore Heather Arnett is third with 148 kills. Senior Bria Ginanvan leads with 51 aces and Arnett is second at 47. Hipfl paces with 59 blocks, and freshman Hattie Pyle has 50 blocks.

Senior Bailey Rhuems has 388 digs for 6.1 digs per set, one of the state’s top marks. Junior Gracen Hipfl is among the state leaders in assists per set at 9.9. Frontenac went 31-13 last season, though ended the fall with three straight defeats.

Frontenac has seen improvements across the board from last year, a season that yielded 11.8 kills per set, a .145 hitting percentage, 86 blocks and 2.4 aces per set. Frontenac graduated Madison Davis, who led the Raiders with 363 kills, 100 more than any other player, but the Raiders returned their next six hitters, including Fields and Reagan Hipfl.

Ellinwood, with no seniors, has won six in a row and stands at 24-4 under coach Greg Maxwell. Ellinwood remained eighth in the Class 2A rankings. The Eagles have also had a solid turnaround. In ’15, Ellinwood finished 12-23. Then, Shelly Duvall, who is now enjoying great success at nearby Great Bend, led Ellinwood to 25-13 and 25-14 records.

Maxwell also leads with 68 aces, while Brooke McReynolds has 30 blocks. The rest of the team has 26 blocks. Junior Anahi Mendez has a substantial lead in digs at 314 (4.9 per set). Sophomore Mary Dimitt has 258 assists, and Maxwell has 229.

Ellinwood has significantly improved its serve-receive game. The Eagles had 191 serve-receive errors last year and has just 104 this season. Last year, Ellinwood had just two seniors in Madison Ward, who led with 480 kills and 54 blocks, and Kaitlyn Pohlman (242 digs).

After last Thursday’s sweep at Central Plains, Smoky Valley stands at 19-9 and on an eight-game winning streak for coach Sharlene Ramsey. SV is in second place in the Central Kansas League behind Hesston. On Tuesday, the Vikings will face Pratt and Hesston.

The Lancers captured the SPIAA league tournament title. Spearville stood No. 9 in last Wednesday’s Class 2A rankings with a 21-2 record. The Lancers were highly ranked in 1A but shifted up a classification earlier this fall. The Lancers stand at 28-2.

Riverton, again ranked eighth in Class 3A, is 27-2 with coach Becky Lipasek entering Tuesday’s matchup with Pittsburg Colgan. After an Oct. 8 loss to Frontenac, Riverton won the Uniontown tournament with 2-0 victories against Southern Coffey County, Colony Crest, Central Heights, Arma-Northeast and in the finals against Olathe Heritage Christian Academy (28-26, 25-21).

In the team’s most recent statistical release, 5-11 freshman middle blocker Jacy Thomasson continues to have an excellent season with 234 kills (3.8 per set), a .387 hitting percentage and 66 blocks, all team-bests. Riverton’s next four hitters are all seniors: Camryn Compton, Danielle Weaver, Zoey Mitchell and Madison Strup. Junior Emma Berry leads with 49 aces, five more than Thomasson. Compton paces with 227 digs.

Shawnee Mission Northwest was unranked and moved into the ninth spot in Class 6A. As well, Lawrence Free State was also unranked and is currently tenth in 6A. The other team that was previously unranked and is now ranked is Holton, which is tenth in 3A.

SMNW stands at 24-10 under coach Susan Specht after 16-23, 29-11 and 23-15 seasons the previous three years. Of the team’s 966 kills, just 40 come from seniors. Junior Reanne DeBose has 333 kills (4.1 per set) with a .243 average. On Oct. 9, DeBose earned the school’s female student athlete of the month honor. The release mentioned DeBose is a team captain and a vocal leader “who also exhibits pillars of hustle and positive work ethic on the court.”

Senior Rylee Garrett has 65 aces, nearly twice as many as any teammate. Engel leads with 59 blocks.

Winny Harris of Atchison has 414 kills this season. Harris is hitting .537 on the year.

Millie Stockard of 2A Colgan continues dominating season for the Panthers with 352 kills. Stockard featured last week on Faces in Kansas is only a junior. She is hitting .372

Morgan McIntire of 6A Gardner Edgerton has 356 kills on the year.

Talby Duerksen of Hesston (3A) has 334 kills on the year for the Lady Swathers.

Caitlyn Strong of St. Johns Tipton with 72, Madison Schepens of Oswego with 70, Erica Fava of Maize South with 68, Mya Mazwell of Ellinwood with 68, Malia ORender with 66 from Colgan, Rylee Garrett of SMNW with 65, Corinna McMullen of Louisburg with 64, Alyssa Hunter of Belle Plaine with 62, Torrance Lovesee of Bluestem with 60. Others with 50 or more include: Callie Palecki of Maize South, Olivia Lehman of Goodland, Brennan Kirchhoff of Thunder Ridge, Jesena Frame of Kinsley, Mya Winter of Peabody Burns, Kaitlin Crossland of Colgan, Keagan Shockley of Eudora, Lindsy Dinnsen of Oswego, Melaia Freisen of Meade, Samantha Schnitta of BV Southwest, Hannah Hoeven of Olathe South, Maggie Musson of Ark City, Celbi Richardson of Hesston, Bria Ginavan of Frontenac, Emily Action of Cimmaron, Elle Bergerhofer of Maranatha, Sophie Francis of Chaparral and Taylor Pierce of Basehor-Linwood

700 plus club this season

600 plus club this season

500 plus club this season

Brianna Gough of 1A Blue Valley Randolph has an impressive 166 blocks this season. Laura Savage of 2A Marion has 128 while Breeanna Young of Blue Valley Randlloph also has 112. Samanatha Blundell has been one of the top players in 1A for Chetopa also with 111 blocks on the season. Hayley Helms of West Elk has 110 blocks this season. Jordan Boone and Kendra Wait have 91 and 90, respectively. Wait is likely the top multiple sport athlete in Kansas and has committed to play at Creighton. Katy Beeman of West Elk also with 88 blocks, Jayce Ginter of Shawnee Heights with 85, Lauren Schutter of Wabunsee with 83, Sarah Marshall of Jackson Heights with 82, Jenna Zydlo of Basehor Linwood with 81, Taylor Hawkins of Shawnee Heights with 73, Katy Hurd of Perry Lecompton with 73, Faith Beikman of Linn with 72, Kim Whetstone of Bonner Springs with 72, Sadie McWilliams of Basehor Linwood with 71 and Lauren Cary of Trinity Academy with 70

Madelyne Koop of West Elk has 614 this season to lead all classes of Kansas.

Stats are based off of into sent into Conor Nicholl, Sports in Kansas, or MaxPreps leaderboards.