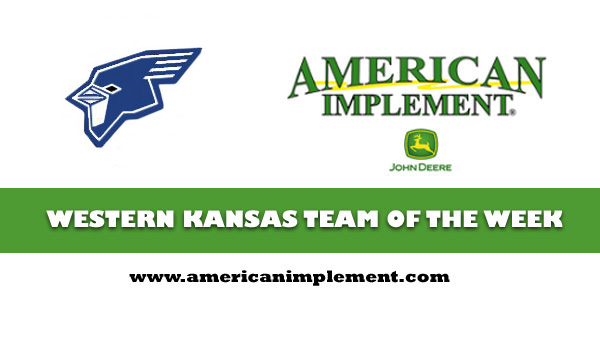 After the postgame handshake and prayer between the two teams, the Bluejay players walked off the field onto the track for a raucous celebration with the fans. The squad and community sung a song and reveled in the win.

Coach Mike Schartz followed his players and drank in the scene with a big smile. A 1985 Cimarron graduate, Schartz coached for many years at different Wichita schools, most notably a lead assistant at Wichita Heights and head coach at Campus and Wichita Southeast. Schartz elected to come home before the ’17 season and became Greg Koenig’s defensive coordinator.

In June, Koenig, a rare head football coach who is also an English teacher, left for Colorado Springs when his wife took a new job that benefited their family. Cimarron finished 7-3 and 8-2 with Koenig. Schartz stepped in as head coach.

“They are just trusting each other,” Schartz said. “And that’s what I told them when I took the job, I said, ‘You trust each other, we are going to go a long way.’ And credit to the families in this community, and our administration and our fans and just a great community. I am just so blessed to be back home.”

Cimarron improved to 6-0 and sits just outside the Class 2A rankings. The Bluejays earned the Hi-Plains League championship and is in strong position for the District 7 title. Last year marked the Bluejays’ most victories since before 2004.

“It’s tough to really appreciate it right now being the losing team, but it was a really good football game, and it’s going to burn for awhile,” Lakin coach Chris Bamberger said. “But I think in time, it will be one that you can look back on and really appreciate.”

Cimarron has had a run of head football coaches. Randall Rath served a one-year stint in ’14, followed by Jason Stithem in ’15 and Chuck Dirks in ’16 before Koenig took over in ’17. Mike Waters has returned as Cimarron’s superintendent.

“Credit to coach K, and the decision he made with his family and everything like that,” Schartz said. “And he did a tremendous job here, and I loved coaching for him and everything, but it was hard to find teachers in June, let alone an English teacher and a head football coach. … The reason that I can do this job is because I have got a great principal, I’ve got a great superintendent, and I’ve got a great support staff around me. The people that work in our school district are tremendous.”

None of the other teams have a winning record. Notably, Stanton County has its closest margin of loss versus Cimarron. Schartz, though, prepared his players to face Lakin in a full 48-minute game.

Helped by the Lakin victory, Cimarron has an opportunity to improve its win total this year. As well, Cimarron will be in much better position to move past Week 10 with a district title. From ’12-18, Cimarron has played 10 games every year, including a Round of 16 trip last fall. Cimarron has not reached the quarterfinals since ’98, tied for the best finish in school history.

Cimarron has won six in a row versus Lakin, including an 18-14 victory in ’18 and 38-36 in ’14. Many of the same key players returned from ’18, including Cimarron running back Tate Seabolt, fullback Hunter Renick and all-purpose threat Payton Marshall. Lakin brought back running back Kayden Christiansen and lineman Hadley Panzer, a Kansas State commit, among its nine returning starters on both sides.

“A great job up front,” Schartz said. “Our kids didn’t quit. We are not as big as we have been the last two years, and there was just no quit in them tonight, and they made the adjustments that they needed.

“That’s what we talk about – it’s the process, and if you do the process long enough, then good things will happen,” he added. “But (Lakin) is a tremendous football team over there. They have good kids, good coaches, too. We are just very fortunate. We got the field goal, and we are on top again.”

Renick highly impressed at the Sharp Performance Combine this summer at Kansas Wesleyan. He earned a scholarship offer from Butler County Community College on KW’s field.

“Tate was blocking,” Renick said. “Tate was a running back that blocked. So was Payton. We have a lot to get better, but man all these positions, especially fullback, it’s not about glory. It’s about get five yards and keep going ahead of the sticks.”

Renick, whom Schartz labeled “a load,” had a big first down run on 4th-and-1 from the Cimarron 29-yard line for a key first down. Cimarron scored on the drive.

“I felt the whole city right on my back,” Renick said. “And I would never want to disappoint anybody in the stands, so I told myself, ‘You have got to get one yard, one yard.’ So I said, ‘Just run, run like you have never had before.’”

Sophomore Braxton Marshall completed six of 12 passes for 101 yards with a pair of touchdowns to Charles Salyer and Marshall. Overall, Marshall had a huge game with seven rushes for 64 yards and five catches for 85 yards with a 38-yard touchdown reception.

“He’s the player of the game,” Schartz said.

He also delivered a hallmark hustle play in the second half. Christiansen found a crease and outraced the defense for a 74-yard run. Marshall chased him down and tackled Christiansen just short of the goal line. Cimarron held Lakin without points on the drive.

Marshall had battled an injury as a sophomore. At state track last spring, Marshall finished sixth on the 400-meter relay and sixth in the long jump. Marshall stood up in front of the football team and said, “I am going to carry you this year.” He’s a team captain. Marshall leads with 39 carries for 467 yards (12 yards a carry) and five scores. He has 11 catches for 260 yards and five touchdowns.

“He’s the most valuable player in western Kansas, in my opinion,” Schartz said.