v Hesston Tennis Looking to be a force in 4A - Sports in Kansas 
Warning: include(../includes/bodytag.php): failed to open stream: No such file or directory in /home/kansass/public_html/ks/news/index.php on line 36

Hesston Tennis Looking to be a force in 4A

Hesston tennis is a force this year in 4A. 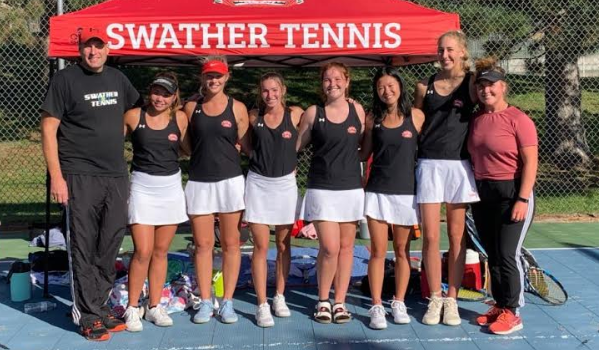 A year later, Hesston has reshuffled the majority of its starting lineup, though Krehbiel has remained in the No. 1 singles slot. As well, the Swathers bumped up to Class 4A for the first time since eight-year head coach Travis Sebits’ inaugural season.

Hesston swept the Central Kansas League tournament Monday and is in position for several state qualifiers at the Class 4A Abilene regional. The top-six singles and top-six doubles finishers at regional qualify for the state tournament. Regional competition is this weekend with state on Oct. 18-19.

“All six of our top girls are kind of playing their best tennis now,” Sebits, a ‘95 Hesston graduate and former Swather tennis player, said.

Krehbiel has posted a 22-5 overall record, including 20-5 at singles. Her losses have come to a Missouri competitor, once to Perrin, twice to Ryan and versus Maize South in a close 8-7 match.

Sebits believes Krehbiel, who has seen a variety of styles playing USTA in the offseason, should expect a top-five finish at state in the different classification. Sebits said Wichita Collegiate, with its depth, is the 4A favorite. Collegiate has captured three straight 4A titles.

Sebits said Krehbiel has “an all-around good game,” with strong fundamentals. Krehbiel has always enjoyed solid ground strokes. She has improved her volleys and developed a stronger first serve for ‘19.

Tradition-laden Hesston won the 3-2-1A team title in ’15. The Swathers captured a doubles title in ’91 and ’09 and a singles crown in ’08 with Miranda Weaver. She went 38-1 as a senior and went on to a standout career at Bethel College.

“That’s exciting for her, just having to know that as a senior, she has a chance to go out there and possibly contend for a state championship,” Sebits said.

“We need to be getting high 90s percentage of those back,” Sebits said. “…That’s something at times where we get a little bit lax. A lot of times in high school tennis, people’s second serves are fairly weak. Sometimes we give up too many of those, like we are making errors.”

No. 1 doubles has featured Michaela Martin and senior Mackenzie Unruh. They were tested early and opened 2-3 with a hard schedule that features losses to Conway Springs, Central Plains, both top-5 programs in 3-2-1A last year. The pair also fell to Buhler, Smoky Valley and Maize, though all three were close matches. Overall, the duo finished a solid 18-9.

“Could tell pretty early on Mackenzie Unruh and Michaela Martin were going to make a pretty good team in the end,” Sebits said. “They certainly went through some bumps and whatnot, and I expected that, having not played together before this year.”

Sebits mixed around the No. 2 doubles team more than he had in recent years. Sebits said Hesston had “maybe four or five girls” vying for the spots. Senior Alexia Boles opened the fall at No. 2 singles after she played singles to finish ‘18.

“She improved her serve, which is important in doubles, and she really got kind of that progressive instinct to close in at the net,” Sebits said. “Because a lot of doubles is kind of finishing points at the net, and she worked on that, and that’s really kind of the change. She kind of set herself apart a little bit from some others, how aggressive she was and her hard work during the season.”

She and junior Megan Martin (no relation to Michaela) have emerged as No. 2 doubles. Overall, Boles is 12-11, and Megan Martin is 12-16. However, they finished 3-0 at league and are 8-3 when they partner together.

“They have come on as well,” Sebits said.

Additionally, sophomore Gracie Dawes opened the season on JV and emerged as a quality No. 2 singles player with a 22-5 mark.

“Really progressed her game throughout the year,” Sebits said. “And became a really good singles player, and so that kind of shifted stuff around.”