v Faces in KS: Millie Stockard - Sports in Kansas 
Warning: include(../includes/bodytag.php): failed to open stream: No such file or directory in /home/kansass/public_html/ks/news/index.php on line 36

Millie Stockard is having a great junior year for the Panthers. (courtesy photo of SMC) 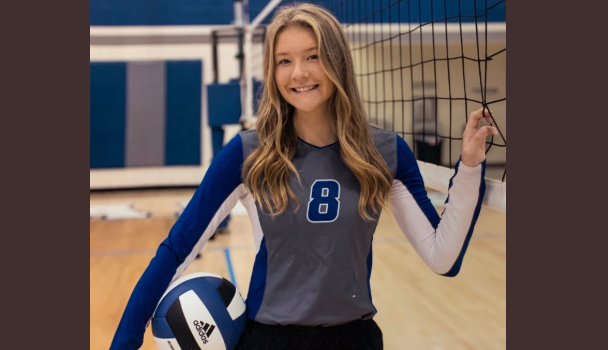 St. Mary’s Colgan High School, located in Pittsburg, is off to a very solid start in volleyball this season with a 27-2 record, one year after going 43-2 under head coach Cathy Oplotnik.

A big reason for that success has been the impact of junior outside hitter/setter Millie Stockard. Stockard, who stands 5-foot-10, has been an immediate impact player since the day she arrived in high school for SMC two years ago. As a freshman, she was the lone freshman on the 2017 All-State Tournament Team. She was also a second team all-state pick that year. Last season, she earned first team all-state honors as her team went undefeated to win the conference championship. The Panthers would take fourth at last years state tournament.

She has continued that success onto her junior year as she has already went over 1,000 kills in her career and hits .359 in her career. She also has 900 career assists. She is one of the top small school volleyball players in Kansas and could be a rising recruit this season as she continues to catch the interest of colleges across the state. Stockard is a versatile player also being the other setter in their 6-2 ofense.

Stockard has been involved with volleyball since she has been eight years old as her father, Steve, began coaching her older sister, Cecelia. Cecelia, who was a member of the Panthers last season and now a freshman at Pittsburg State on the volleyball team, earned all-state honors as a senior setter during the 2018 season. The two sisters are two years apart.

Stockard possesses a very high volleyball IQ and that comes with repetition of playing all the time. She plays at the club level every December through April from the well-known Star Aquila team that was founded years ago in Pittsburg. Her father played club volleyball when he was younger and now currently works with Millie year-round in the sport.

It’s not about just volleyball either for Stockard. She knows how important strength and conditioning is to her success and future. She has worked very hard in the off-season with the weights program led by Shawn Seemater. Seematter is the schools head football coach in his third year and also the athletic director. Stockard has an impressive 27” vertical and 30” 3-step approach vertical. She credits her explosiveness to the strength and conditioning program at the school.

It’s not just Stockard either, players like Kaitlin Crossland and Lauren Yaghmour are also key factors in their success. Crossland, a multiple sport standout, was the Sports in Kansas 2-1A softball player of the year last season in leading the Panthers to a state title.

We caught up with Millie in the latest Q&A edition of Faces in Kansas below.

This feature is presented by Jocks Nitch Sporting Goods of Pittsburg. Stop by and check out all of our gear for local teams. Proud to support local athletics.

Also special thanks to Craw-Kan and Labette Bank for their support of Southeast Kansas high school sports.

To become the best leader I can be and to help my teammates win our schools first ever volleyball state championship!

I’m hopeful that we will win sub state and have the grit to make it to the championship match in Dodge City.

I think its mostly my passion for the game and my ability to remain positive in stressful game time situations.

Going to SMC-Colgan has formed me into the athlete and teammate I am.  Without faith being a daily priority, I could easily lose focus for why I play and for who the glory ultimately goes to.  Here at Colgan we are like a family and I feel very supported by the community around me.

We have an exciting, powerful offense that makes our games exciting!  We can run advanced attacks that can fool the block and can make the matches fast paced.

Kaitlin Crossland and Lauren Yaghmour are both key factors in our success.  Kaitlin is another outsider hitter and sets opposite me.  Lauren is our libero and is able to get many plays started with a great pass.

That’s a difficult question to answer because I love so many things about this sport.  But I guess being able to understand the game at the level I do gives me the confidence needed to play at the next level.

I play softball and typically am placed in center field, catcher, or second base.

Coach Oplotnik has been supportive of my success and sets high goals for us as a team.

Several of us played club volleyball for Star Aquila from December-April.  My dad works with me year-round, he played club volleyball when he was younger.  I also did our after- school weights program with Coach Seematter during the off season.  This helped me improve my vertical, overall strength, and agility.

I’ve heard from several schools, both in and out of state.  I’ve made some unofficial visits this Fall and have several more planned.  I’m keeping my options open and am excited to visit as many programs as possible so I can make the best decision possible.

I love supporting Colgan Football!  And, spending time with family and friend every chance I get.

I honestly don’t know at this point.  But, I hope that I’m happy and continuing to live my Faith.  And, I hope that volleyball is still a part of my life in some way.

I’ve always enjoyed writing for my English classes.  I work very hard to stay organized and on top of my grades.

My mom because of her endless support of me.  She never lets me forget that there’s more to me than just being a “good” volleyball player.  She pushes me to not only be competitive and want to win, but to have good sportsmanship and to be good person on and off the court.

That I’m an undercover FBI agent.  Haha, just kidding!  I really can’t think of anything other than that I’m obsessed with dogs and would live on Ramen Noodles if I could!

I just want to add that my family is a big factor in why I’ve been successful.  I have two older siblings playing at the collegiate level now.  My brother plays football and my sister plays volleyball, this has inspired me to do the same.