v What impressed us after week five of 2019 fball season? - Sports in Kansas 
Warning: include(../includes/bodytag.php): failed to open stream: No such file or directory in /home/kansass/public_html/ks/news/index.php on line 36

What impressed us after week five of 2019 fball season? 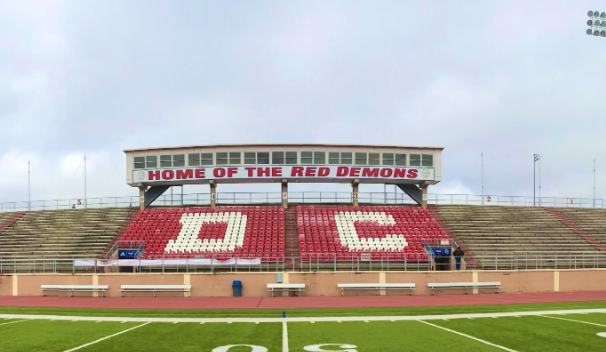 A year after a 1-8 season, Lawrence improved to 5-0 under coach Steve Rampy, in his second fall after longtime stints at Blue Valley and Pittsburg State. The No. 3-ranked Lions defeated Shawnee Mission Northwest, 51-20, in a game where both squads were 4-0 entering the night. Devin Neal delivered 113 rushing yards and two touchdowns, with more than 150 receiving yards and three scores.

Dodge City moved to 5-0 with a 35-14 win against Wichita West. Dodge City are 9-1 in its last 10 contests. DC has permitted just 15.4 points per contest, and has nearly halved its scoring defense from after five games last year. Alden Knedler rushed for four touchdowns, and Dodge City forced three turnovers, according to broadcaster Sean Boston.The last time Dodge was 5-0 was 2010, the team would go on to a 11-1 record.

Garden City scored 23 unanswered points to defeat Liberal, 26-12, for its second straight win. GC has won 12 in a row versus the Redskins. Josh Janas, a breakout player this year, has scored a rushing touchdown in every game.

Only four teams remain unbeaten in 6A football and they are all on the West Bracket (Junction City, Derby, Dodge City and Lawrence all are 5-0). Everyone on the East has at least one loss.

No. 1 Aquinas received 199 rushing yards from Tank Young in a 35-21 victory against Blue Valley West.

No. 4 Maize beat Goddard, 42-0. Camden Jurgensen had a big game with 15 of 20 passing for 198 yards and two touchdowns. Caden Cox rushed for a pair of touchdowns, and Prevon Christon had 104 receiving yards. Christon had a huge 31-yard touchdown reception that has gone viral online.

No. 5 Bishop Carroll had a pair of rushing touchdowns from Aiden Niedens in a 28-14 comeback victory versus Great Bend.

Maize South’s season has involved several comeback wins and a continued turnaround after an 0-3 start after ’18. The Mavericks are 11-1 in its last 12 contests, captured the AVCTL Division II title and beat Andover Central, 24-17. Both squads entered the game 4-0. Maize South was down 10-3.

The Mavericks, with a top-10 scoring defense in each of the last three years, had another big performance. Drew Wolf picked off two passes, Harper Kennedy had a pair of interceptions and a pick-six, Trevion Mitchell had a scoop-and-score fumble recovery. Calvin Benefiel recorded a pair of sacks.

KC Schlagle continued its unusual season with a 12-6 double-overtime home win against K.C. Harmon and moved to 3-1. Schlagle had an open date, then won 33-24 and 25-23. In Week 4, Schlagle lost, 6-2, to KC Wyandotte in a game delayed because of weather in the third quarter – and then not completed. Joshua Becton, a first team all-league defensive back, delivered both rushing scores for Schlagle. Next week, Schlagle is playing at home but is the designated road team versus KC Sumner Academy.

Five teams remain unbeaten at 5-0 after the first five weeks of the season in Desoto and Aquinas on the East while Wichita Northwest, Maize South and Maize remain unbeaten.

No. 1 Bishop Miege bounced back from a rare loss last week with a 34-7 win at Missouri power Rockhurst. Miege lost to Rockhurst last season in a close game and fell, 28-27, to St. James in Week 4 before the win this week. Miege trailed 7-0 before 34 straight points. Tim Dorsey tossed scoring passes to Daniel Jackson of 57 and 60 yards. Brison Cobbins rebounded from a rare down game versus SJA with a pair of rushing scores.

No. 5 Tonganoxie received 32 carries for 235 yards and two touchdowns from Cooper Cunningham in a 21-12 win against KC Piper.

Basehor-Linwood defeated K.C. Turner, 49-8, with all its points in the first three quarters. Chase Torkelson completed 13 of 19 passes for 240 yards with three touchdowns. Zach Sisemore delivered three carries for 52 yards and a touchdown. Ethan Huber had a massive game receiving with nine catches for 194 yards and a pair of touchdowns.

Tyson Weimers, a player with Autism at Pittsburg High School, kicked not one but two PATs in the win over Ulysses on Friday. It was nominated for the Craw-Kan Shark Bite Play of the Week and can be seen on our social media feeds.

Only three of the 32 teams remain 5-0 after five weeks in Paola and Tongie on the East while McPherson is the only unbeaten on the West.

No. 1 Andale continued its ridiculous dominance with a 78-0 victory against Wichita Trinity – all in the first half. Trinity called the game at the break.

No. 3 Topeka Hayden remained perfect against Jefferson West in school history with a 13-6 victory. Each team was 4-0, and JW had not permitted a point in the first month. The Tigers’ defense showed they could play with an elite team, though Hayden’s defense delivered an impressive showing. JW drove to the Hayden five-yard line on the final drive, according to Topeka Capital-Journal’s Rick Peterson.

Cheney picked up a huge district win versus previously undefeated Wichita Collegiate, 46-21. The Cardinals are 4-1 and have already doubled their win total from last year. Riley Petz had 135 rushing yards and two touchdowns, with 145 receiving yards and two scores. He tallied 45 passing yards and a touchdown, and blocked a field goal.

Sophomore Kaden Johnson took over at quarterback for Holcomb and went 21 of 30 passing for 242 yards with three touchdowns and an interception in a 32-21 road loss to Larned.

Galena picked up a key district victory last night in 2 OTs against Caney Valley. The district is shaking out to be a loaded one with Columbus and Frontenac both 5-0 (they meet in week eight). Caney Valley is a very solid 0-2 team in district play while Parsons and Galena remain at 1-1 in district. Could be very interesting.

No. 1 Hoisington beat Ellsworth, 49-7, in a matchup of undefeated teams. Wyatt Pedigo didn’t have a carry in the second half but recorded a pick-six, according to Hoisington broadcaster Cole Reif. At the break, the Cardinals led 28-0. Pedigo had nine carries for 85 yards and two scores. Cole Steinert had his first career touchdown.

Cimarron and Lakin meet next Friday in a huge southwest Kansas contest. Both squads are 5-0. Cimarron junior running back Tate Seabolt finished with 18 carries for 200 yards and three touchdowns.

Conor Haviland of Humboldt averaged nearly 30 yards per carry for the 2nd week in a row. 8 carries for 226 yards and 5 TDs. Was also 4 for 4 passing for 51 yards and a TD pass. Kicked off 10 times on the night as well & had 2 special teams tackles as the kicker.

Lyons ended a 33-game losing streak with a 12-7 victory against Ellinwood.

Southeast-Cherokee moved to 5-0 with a 44-24 win versus Jayhawk-Linn and won the Three Rivers League title. It’s believed to be the first league crown ever for SE.

No. 1 Smith Center steadily pulled away from Oakley, 42-0, and clinched its first outright Mid-Continent League title since 2009. Smith Center has won back-to-back state championships. SC received scoring plays from a variety of players, most notably with some rare passing scores. Smith Center threw three passing scores – which is at least the most for SC since before 2015.

Lyndon won its ninth Flint Hills League title in the last 10 years after a rare down season in 2018. Lyndon defeated Northern Heights, 34-24, in a matchup of two 4-0 squads entering the contest.

Leon-Bluestem ended a four-game losing streak with a 32-21 win at Yates Center. Nic Laidler recorded 20 rushes for 185 yards and two scores. He caught one pass for 28 yards, delivered four tackles and intercepted a pass. Kendall Keeton delivered 22 carries for 188 yards and two scores. Bluestem ran for a school record 440 yards, according to the Butler County Gazette.

Clifton-Clyde defeated No. 5 Victoria, 28-14, in a physical contest played in wind and mist that created soggy field conditions. Neither team completed a pass until the second half. C-C was not expecting to run its usual single wing attack this year because of its personnel. However, the Eagles veteran offensive line and experienced quarterback Aiden Rudolph have delivered a big year. Rudolph rushed for three touchdowns, including a 40-yarder on fourth down inside the final 90 seconds to effectively seal the game. C-C is in great position to win District 7 with victories against Hill City and Victoria the last two weeks. C-C moved to 5-0, and ended the Knights’ 12-game home winning streak.

No. 2 St. Francis held off Hoxie, 30-28, in a wild finish. Hoxie drove down to the goal line in the final seconds, but missed on the end zone on third and fourth down. However, after a series of kneel downs and quick timeouts, SF elected not to punt. Hoxie took over with six seconds left at the SF 2-yard line. However, Hoxie fumbled and St. Francis improved to 16-1 with second-year coach Nick Fawcett.

Also in District 1, the game between Cedar Vale-Dexter and Sedan was moved from Dexter to Cedar Vale because of field conditions in Dexter. CV-D still had senior night and defeated Sedan, 36-28, to move to 4-1.

Bennington’s Javon Allen set a state eight-man record for kick return scores last year. On Friday, he finished with four carries for 149 yards, all for touchdowns. The Bulldogs won at Solomon, 48-0.

Spearville’s Carson Rich didn’t play last week, but bounced back as the Lancers enjoyed a quality win versus Kiowa County in district play. Rich had 25 rushes for 168 yards and three touchdowns. Kolten Bennett finished with 15 carries for 125 yards and a touchdown. Trace Tasset has quietly enjoyed a breakout season with four carries for 70 yards and two scores. The Lancers defeated Kiowa County, 46-16, and have a big matchup at 5-0 Ness City this week. NC made big defensive strides from ‘ 17 to ’18 and then again to this year. The Eagles won at Kinsley, 46-0, and have allowed just 37 points.

No. 1 Hanover extended its all-time eight-man best winning streak to 43 games with a 56-6 road win against Onaga. In one of the state’s premier matchups, Hanover will play host to district and Twin Valley League rival Axtell, ranked second in the classification, next week. Axtell won at Wetmore, 74-24, and has scored at least 58 points in every game.

In a battle of winless teams, Quinter collected its first victory with a 48-0 win against Wallace County. Tucker Gillespie tallied 29 rushes for 300 yards and six touchdowns. His only reception was a 28-yard score.

. Paul, Frankfort, Hanover, Axtell, Osborne, Thunder Ridge all remain 5-0 after five weeks. Hanover, Axtell and Frankfort all in the same district. The Hanover versus Axtell game next week is the one everyone is waiting for next Friday in Hanover.