v Sports in Kansas: Statewide Volleyball Notes - 9/30/19 - Sports in Kansas 
Warning: include(../includes/bodytag.php): failed to open stream: No such file or directory in /home/kansass/public_html/ks/news/index.php on line 36

Sedgwick is off to a very solid start. (Sedgwick HS) 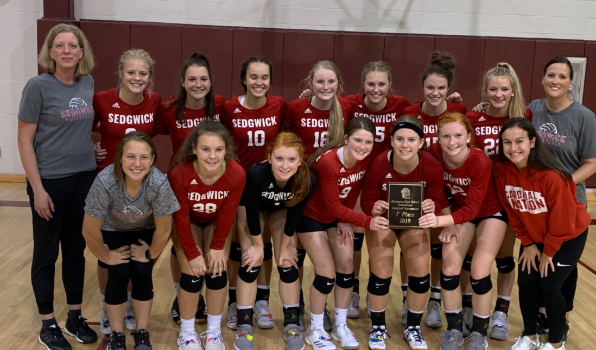 While the new classifications have been released, the Kansas Volleyball Coaches Association will not release rankings with updated classifications reflected until Week 4 rankings are submitted this week.

Thomas More Prep-Marian was unranked, though moved into No. 9 in Class 3A this past week – and has continued to play well. The Monarchs stood 16-5 when Week 3 rankings were released last Wednesday and is now 24-5. TMP has just one senior, 5-foot-8 Kallyn Dewitt, but a talented sophomore and junior class.

The sophomores include 5-foot-11 Emilee Lane, who enjoyed an outstanding freshman year in volleyball and basketball. Lane was first team all-league in volleyball last season, and is the lone all-league player back.

The junior class includes middle hitter Jadyn Gottschalk, defensive specialist Emilee Augustine and 6-foot-2 Sasha Wasinger. Gottschalk is a great athlete who set the school clean record for ninth grade girls and was a very high-level gymnast for many years.

Coach Natausha Dreher has done a terrific job of turning around the Monarch program. In the previous four years, TMP went 34-5, 37-4, 42-3 with a Class 3A state title and 20-16 last season.

On Sept. 24, the Monarchs had a home triangular with a 2-0 sweep against Oakley and a big 2-1 win versus Smith Center. Smith Center is 16-3 and ranked second in Class 2A.

The Owls, defending 2A champions and ranked third in 2A, bumped their record to 16-1. Garden Plain won the Douglass tournament this weekend with a three-set victory in the finals versus El Dorado. GP also swept Mulvane, Winfield, Hillsboro, and Augusta at the tournament. Alli Puetz and Natasha Dooley each earned all-tournament team honors.

Lyons (14-4) swept Sterling, Ellsworth and Little River to capture the LR tournament. The Lions have made a sizable turnaround after 4-19, 17-19, 6-23 and 12-17 records the last four years. Lyons has won four in a row and held a 28-11 advantage in sets won. Lyons has only lost to Hesston twice, Halstead, and Smoky Valley.

Little River is 15-5 after the 25-17, 25-20 loss to Lyons. It marked the first matchup between the schools since ’07. Lyons features three seniors with Liberty Belote, setter Daci Stover and 6-foot middle/outside hitter Kristina Head. She was voted team captain as a junior and her mother was a former assistant coach.

The Redskins have enjoyed a nice season from sophomore Lily Boughfman with 3.7 kills per set and a .309 hitting percentage – 100 points higher than any of her teammates. Little River was ranked third in Class 1A two weeks ago.

Leah Ayers, a first-year transfer and the daughter of new LR football coach Kevin Ayers, stands second with 78 kills, 2.4 per set. Coach Ayers was formerly the longtime coach at Jetmore and Sharon Springs.

G-E is ranked fourth in 6A, up a spot from last week. Washburn Rural held down the No. 2 spot in 6A. Gardner Edgerton stands at 16-7. WR is 15-1 and gets rival Topeka Hayden in a matchup on Tuesday. Hayden is ranked second in 4A.

However, Rural receives substantial contributions from non-seniors, notably junior Izzy Entz, along with freshmen Brooklyn DeLeye and Taylor Russell. Rural was 38-7 and fourth in Class 6A last season. WR has vaulted from a No. 10 ranking in the preseason to second. Rural has started four freshmen and have played five, with two sophomores in key roles. Junior Cassidy Doll went down with an ACL injury three weeks ago.

Olathe West is ranked ninth in Class 6A after not being ranked in the previous week. OW is 15-6 in its third year of existence. Coach Amy Hoffsommer has enjoyed a big turnaround after 3-32 and 10-25 marks in her first two seasons with the program.

According to the team’s most updated statistics, freshman Ava TeStrake has enjoyed a great year with 161 kills (3.6 per set) and a .307 hitting percentage. Junior Madalyn Ehlers is second with 130 kills (2.9 kills per set). She carries a .254 average. No other player is above .125 hitting.

TeStrake has long been a standout player in the younger ranks. Three years ago, she led Dynasty volleyball 11-black to a national title and was expected to go to Olathe Northwest before OW opened. She is a 6-foot-3 right-handed outside hitter.

TeStrake paces OW with 32 aces, three ahead of Ehlers. Seniors Bethany Allison, Ellie Wiltanger and Dominique Loveless are key contributors. Juniors Nevaeh Jackson and Lexie Burke are 1-2 in blocks with 30 and 21, respectively.

Wiltanger leads with 136 digs, and Loveless paces with 368 assists. Overall, OW averages 11.4 kills per set with a .204 hitting percentage, along with 2.8 aces per set.

Olathe West started the season on Aug. 31 with a long trip to Hays and defeated Hays High, TMP, Wheatland-Grinnell and Scott City to win the tournament. Since a 2-3 finish at the Lansing tournament on Sept. 14, OW is 6-2.

On Saturday, Sedgwick swept to victory in the Herington tournament and moved to 24-1 to cap a strong week. Sedgwick is ranked fifth in Class 2A.

On Thursday, the Cardinals defeated Kingman and Nickerson, which is ranked third in Class 4A. Sedgwick defeated Nickerson in three sets.

Sedgwick’s only loss was a 2-1 road defeat at Garden Plain in the season’s second match. Thompson, the starting libero, was second team all-state on a 34-4 season last year. Stucky stands at 427-198 in her career.

Goddard on 18-match winning streak, up three spots in 5A

The Lion girls are 18-2 and shifted from tenth to seventh in Class 5A.  Goddard lost 2-1 to Maize South and Derby to open the season. Maize South is still undefeated and is ranked sixth in Class 5A. Since then, the Lions have 2-1 victories against Valley Center, Maize, Belle Plaine, Andover, rival Goddard Eisenhower, Great Bend and Hutchinson.

The last four victories, two at home on Sept. 24 and two at Great Bend on Sept. 26, have all been 2-1 wins for coach Marianne Mooney. Every player on the varsity roster except sophomore Cydney Carter is a senior. Goddard returned all but one player from last year’s team.

Independence moved from tenth to seventh in Class 4A and was 11-2 at the time of the poll rankings last week. On Saturday, Indy defeated Southeast-Cherokee and West Elk by 2-0 margins and then beat Pittsburg Colgan, 2-1 (26-24, 19-25, 25-16). Overall, Independence won the 10-team Cherryvale tournament with Colgan second, West Elk third and Southeast-Cherokee fourth.

Colgan is ranked fourth in Class 2A. Indy had been 0-4 versus Colgan since ’08, including a 2-1 loss last season.

Against Colgan, Bitner had eight kills, and Jameson eight digs. Versus WE, Bitner finished with six kills, 10 digs and seven assists.

Attica defeated Argonia in the semifinals and then Cunningham in the championship match of the Central Burden tournament. Attica stands at 18-2 and is ranked sixth in 1A, a drop of one spot from last week. Attica had lost to Cunningham four days before the tournament. The Bulldogs had opened the season 10-0 with its only other loss to Belle Plaine.

WE WOULD LOVE TO HAVE MORE VOLLEYBALL INFO ON YOUR TEAM... You can send that (tips/stats/info) on  to Conor Nicholl at the following email address: cnicholl1@gmail.com