v What impressed us after week four of 2019 fball season? - Sports in Kansas 
Warning: include(../includes/bodytag.php): failed to open stream: No such file or directory in /home/kansass/public_html/ks/news/index.php on line 36

What impressed us after week four of 2019 fball season?

Sublette ended their losing streak on Friday as they knocked off Syracuse. 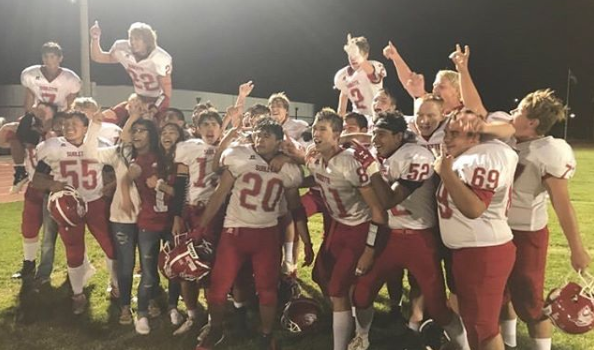 No. 1 Derby defeated Bishop Carroll, ranked No. 3 in Class 5A, 21-0. It marked the fourth straight year the Panthers have beaten Carroll. Grant Adler rushed for a score, passed for a touchdown, and Tre Washington rushed for a touchdown. Derby has permitted just 26 points this season and has won 17 straight contests. Carroll, ranked third in Class 5A, is 2-2, but has played Wichita Northwest (No. 2 5A) and Derby to competitive, lower-scoring games.

Dodge City delivered a key Western Athletic Conference 24-21 win at home versus Great Bend. The Red Demons again had a late key field goal from Jose Valverde for the second straight week. He made a 22-yarder. DC, Junction City, Derby and Lawrence are undefeated in 6A West, and Shawnee Mission Northwest is undefeated on 6A East.

Credit to DC coach Dave Foster for his new three-front defense with smaller players, including former first team all-conference linebacker Jashon Taylor now at defensive end. DC has made a substantial statistical defensive improvement from last year. Dodge City led 21-0 at halftime. The Red Demons have allowed just 63 points this year. After the first month in ’18, the Red Demons had allowed 126 points.

Blue Valley, expected to be much improved after a rare down season last year, defeated Rockhurst, 21-14. Rockhurst (Mo.) is a longtime Missouri power with legendary coach Tony Severino and was ranked No. 7 in Missouri. BV is off to a 3-1 start and has only lost to Aquinas, ranked No. 1 in Class 5A, in Week 1.

In the Eastern Kansas League, St. James Academy pulled a stunner. 28-27, against Bishop Miege, ranked No. 1 in Class 4A, on Thursday. SJA limited Miege to just 20 rushing yards. SJA’s defense stiffened once Miege got the ball back at its own 22-yard line with 1:50 left.

Maize South moved to 10-1 in its last 11 contests and 4-0 this year after a 33-15 comeback victory versus Arkansas City. Hunter Niemann rushed for 245 yards and four scores with scoring runs of 10, three, 39 and 86 yards. Maize South gets Andover Central (4-0) in a key contest this week.

As well, Maize running back Caden Cox, who committed to KU as a priority walk-on the day prior, helped the Eagles to a 4-0 start. He finished with 21 carries for 158 yards and had four receptions for 71 yards and four scores. Maize defeated Newton, 44-7.

Goddard-Eisenhower defeated rival Goddard, 21-20, and rallied from a 13-point deficit. Goddard is ranked fifth in Class 4A.

Class 4A has five unbeaten teams after four weeks: Paola and Tonganoxie in the east, and Buhler, Andover Central and Wellington in the west. Paola had its fourth straight victory by at least 27 points with a 35-7 victory versus Spring Hill. Paola’s Connor Hasz had two long touchdown runs, and Paola had a blocked punt.

In one of many games that was halted or changed because of weather, No. 2 McPherson defeated Abilene, 48-3, in a game called at halftime. McPherson  delivered 273 yards of total offense, and quarterback Dylan Rinker, starting in place of Kaleb Hoppes, threw a 55-yard screen pass to Trey Buckbee. McPherson scored three straight touchdowns off Abilene turnovers, according to the McPherson Sentinel.

In one of the state’s marquee games, No. 3 Marysville ended No. 1 Sabetha’s 23-game winning streak with a 40-32 victory. Marysville running back Atreyau Hornbeak rushed for five touchdowns.

Goodland quarterback Leyton Cure led the Cowboys to their first win of the season with a 21-20 victory against Oakley. He rushed for a career-high 149 yards and passed for 205 with three total touchdowns, according to Goodland broadcaster Ross Volkmer.

Columbus finished 1-8 last season, a rare down season. The Titans are 4-0 under first year head coach Blake Burns after a solid victory over previously unbeaten Caney on Friday.

Frontenac improved to 4-0 on the season as they knocked off Galena 27-14. Frontenac had lost the last three meetings to Galena, including two losses to them last season.Und

No. 1 Hoisington received a big game from Josh Ball. He finished with 11 tackles, four for loss and a sack. The Cardinals defeated TMP, 42-12. Wyatt Pedigo rushed for 189 yards and five total scores, according to Cardinal broadcaster Cole Reif. Hunter Morris delivered his first 100-yard rushing game with 113 yards. Hoisington led 21-6 at halftime as Pedigo went over 100 rushing yards at intermission.

Conway Springs continues to bounce back after the Cardinals’ upset loss to Cheney in Week 2. Collin Koester delivered 11 carries for 241 yards and three scores on runs of 54, 41 and 76 yards. He was two of two passing for 56 yards with a score. CS defeated Hutchinson Trinity, 43-8.

Garden Plain’s Matt Pauly finished with six carries for 173 yards and four scores. He also passed for a pair of touchdowns as the Owls moved to 4-0.

Riley County defeated No. 3 Rossville, 34-15, in an upset in Mid-East League and district play. Garrett Harmison threw, rushed and caught at least one touchdown pass for the Falcons.

Two weeks ago, Maur Hill enjoyed a comeback win against Jackson Heights, which was ranked in Class 1A. This time, Riverside defeated Maur Hill, 28-27, on a 37-yard pass from Kobe Davis to Conner Hayes. Riverside made the extra point to secure the victory.

Belle Plaine allowed points for the first time this season, but moved to 4-0 with a 41-22 victory versus Cherryvale. BP is off to its best start in many years.

Lakin (2A) has outscored opponents 190-to-42 under head cosch Chris Bamberger to 4-0 start in 2019. Broncs also feature FBS commit OL/DL Hadley Panzer (Kansas State). Lakin should definitely be a factor in the 2A postseason

No. 1 Smith Center defeated No. 2 Plainville, 40-14, in a Mid-Continent League contest. SC received at least one rushing touchdown from four different players. Quarterback Trenton Colby opened the scoring with a 76-yard run midway through the second quarter and had a key scoop-and-score fumble recovery in the second half. SC led 14-7 at halftime. Smith Center lineman Brell Spiess continued his great season after he shifted down on the line and took over for two-time all-stater Austin Hobelmann. Spiess sprung the first two touchdowns runs – the second by Colton Shoemaker – with big blocks.

Plainville played its first game without senior Jared Casey, a four-year starter and one of the state’s best players. Casey is expected to miss three weeks with a broken hand. The Cardinals received more than 100 receiving yards from Cody Crawford, who also made a key interception at the goal line. As well, freshman Kyle Werner stepped up in the backfield with a touchdown run. Senior Jordan Finnesy went over 160 passing yards.

Valley Heights defeated Republic County, 34-14, and rung the Coach Lew Memorial bell after the game in honor of former coach Lew Whitson, who has passed away.

Olpe improved to 4-0 in a marquee 1A showdown with Jackson Heights. Although only six posessions in the first quarter and the game was tied 14 all at the half. Olpe shut out the Cobras in the second half in a lightning delayed contest. The Eagles won this game 20-18 last year before getting state runner up.

Sublette ended a 35-game losing streak on Friday night as they knocked off Syracuse, 15-14.

No. 2 St. Francis defeated previously undefeated Oberlin, 48-2, behind a huge game from quarterback Brady Dinkel, a four-year starter. He had 16 carries for 280 yards and six touchdowns.

Canton Galva has outscored opponents 200-to-21 as they have dominated competition in 2019. Landon Everett has led the charge. The Eagles also feature highly regarded sophomore Tyson Stuber. Shelby Hoppes has urban rolling as the head coach.

Pratt Skyline continues to be one of the state’s biggest surprises with a 4-0 record. Sophomore Jesus Casas delivered 16 carries for 247 yards and four touchdowns in a 60-14 win against Moundridge. Skyline has a key district matchup against 3-1 Little River this week.

No. 4 Madison delivered a wild 68-58 win against Maranatha Christian Academy in a key District 3 contest. Madison is 4-0 and ranked fourth in the classification. Drew Stutesman has picked off seven passes, including two last year. Madison is 13-1 in the last two years, including a pair of close victories versus MCA. Coach Alex McMillian has done a great job of turning around the program after a successful stint as a Victoria assistant. Madison had the No. 3 scoring defense in eight-man football  in ’18 and has made turnover creation a program hallmark.

No. 5 Victoria improved to 4-0 and sets up a big game versus 4-0 Clifton-Clyde at home this week. The Knights easily defeated Lincoln, 70-18. Grant Schoenrock passed for 40 yards, and Jayvon Pruitt rushed for 125 yards and five touchdowns on nine carries. Schoenrock finished with five carries for 77 yards and three scores. Victoria had its fourth straight strong defensive performance and outgained Lincoln, 305-174. Trenton Engel finished with five tackles with two tackles for loss and a sack.

Legendary coach Kevin Ayers has already made an impact in his first season with Little River. LR opened with a big loss to Canton-Galva, ranked No. 1 in the classification, but has come back with three straight victories, including a shutout against Central Plains. LR has permitted just six points in the last three games.

Ness City moved to 4-0 as Hector Rodriguez rushed for 260 yards and three touchdowns in a 30-7 win against South Gray. The Eagles had a nice statistical defensive improvement from ’17-18, and has done so again this year with just 37 points allowed.

Argonia-Attica defeated Caldwell, 30-0, with an impressive performance. Caldwell was undefeated.

No. 1 Hanover defeated Blue Valley-Randolph and captured its 42nd straight victory, which set the eight-man consecutive wins record in the KSHSAA era. Hanover is 4-0.

Wheatland-Grinnell has already eclipsed its win total from last season and has quietly emerged as a surprise with a 3-1 mark for coach Jesse Vincent. W-G has not had a season over .500 since 2011. However, freshman Jeff Vincent has intercepted seven passes in the first month, including three last night in a win against Sharon Springs.

Axtell quarterback Quinn Buessing had another big game in a 58-10 victory at Pike Valley. He has led No. 2 Axtell to a 4-0 start and has 1,036 passing yards, 19 passing touchdowns, zero interceptions and nine rushing scores. A four-sport all-state athlete, Buessing is on track to break several notable career passing records.

No. 3 Osborne blanked Sylvan-Lucas, 48-0, in a game that was over at halftime. The Bulldogs scored 16 points in the first quarter and 32 in the second. Senior Steele Wolters completed five of five passes for 71 yards with three scores against zero interceptions. He also rushed 11 times for 77 yards and a touchdown. Senior Darrien Holloway delivered 11 carries for 106 yards and a touchdown.

Cheylin quarterback Colton McCarty had another massive performance as the Cougars came back to beat Golden Plains, 71-61. He rushed 41 times for 442 yards and six touchdowns, and also completed 20 of 31 passes for 269 yards and three touchdowns. Cheylin is 4-0 on the year.

Moscow remains unbeaten at 4-0 as they've scored 30 or more in all of their contests. They get Ashland (3-1) next week who is coming off a lost to Pawnee Heights.