Lance Hoffsommer is having a breakout sophomore year for 1A Sedgwick. (photo: Kelley DeGraffenreid) 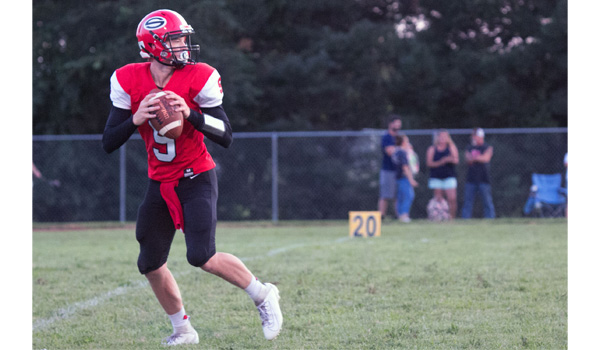 One of the things we love covering at Sports in Kansas are players that have breakout seasons that we didn’t know a lot about coming into the year. We go to Sedgwick, Kansas to find one of those players in Sedgwick High School sophomore quarterback Lance Hoffsommer.

The sophomore, who is a first year starting quarterback, has opened the eyes of many after the 3-0 start for the Carindals. In three games, he’s passed for 869 yards with 16 scores while rushing for another. HE has thrown just two interceptions in 76 passing attempts while completing 45 of those passes. Not bad for his first three games as a starter, right?

It should be no surprise that Sedgwick is having more success at the quarterback as they’ve had a lot in recent memory, most recently with Hooper Schroeder and Brylie Ware, now in the minor leagues with the St. Louis Cardinals. Jeff Werner teams are known for spreading it out and throwing the ball. A lot can also change in a year as Hoffsommer grew four inches in one year. The 6-foot-1, 165-pounder, was just around 5-foot-9 last year.

Hoffsommer is also an outstanding baseball player, hitting over .500 last year as a freshman on his way to earning all-league honors.

Sedgwick (3-0) also features veteran player Kale Schroeder who moved from receiver to running back this year and has shined with 35 carries for 348 yards (4 TD) along with nine catches for 179 yards and a score. Qayden Shepherd has been a breakout receiver with 12 catches for 295 yards and six scores. Defensively Gannon Resnik leads the Cardinals with 38 stops.

While he is just getting started in his career, the Cardinals have their sites on a solid season in 1A this year. They are back in action on Friday with a solid 1A matchup w/ league rival Ell-Saline, they've yet to allow a point at 3-0 on the year. Both schools have lost their highly regarded quarterbacks from last year but their replacements are picking up right where they left off. While competition will certainly get better starting, you can't ask for much more over the first three weeks than what Hoffsommer has provided as a first year starter. We caught up with the outstanding breakout sophomore below.

Our family moved to Sedgwick in 2010.  The following Fall, my older brother, Andrew, decided to play on the Sedgwick Junior Football team as a 5th grader.  The Sedgwick Junior Football coach, Layne Schroeder, talked me into playing on the 3rd/4th grade team even though I was only a 2nd grader.  My position was WR although I didn’t play much.  It was the beginning for me to get introduced to tackle football.  I got to begin playing the QB position beginning in 3rd grade.

Do everything I can to help this team win a State title.

Yes.  With the coaching staff we have at Sedgwick High School and with Head Coach Jeff Werner, we always have a shot to make a run in the playoffs.

I’m only a Sophomore.  I’m doing my part for the team.  I’m lucky to be on a team with such a good Senior football class.  I have plenty of athletes around me and the offensive line keeps me clean.

Exciting.  The stands and sidelines always seem to be full for our games.  After the game has ended and after the coaches speak to the team, win or lose, the community comes out to see us.  A lot of support exists for the football team.

I think we are fun to watch because we are an up tempo 4 WR set offense that spreads the ball around to a lot of different players.  We are at our best when we have balanced running and passing, but I’d say we pass more than most teams in the State of Kansas.

Every player on the team is critical to our success and we are really lucky for a 1A football team to have most of our players only have to play one way.  Of course though, Kale Schroeder, our RB is key to our team’s success.

Playing a competitive and physical game with my friends.  It’s fun to play a game that is also my favorite to watch, NFL.

Really cool.  I know coach expects a lot out of his QBs, and I’m trying to get better at the position because I know I can learn a lot from him.  He is also an exciting coach with a lot of energy which gives us confidence and an EDGE when going into our football games.

Because we are a small town Kansas team, we hang out a lot together over the summer.  We build friendships that I think helps us play for one another in competitive sports.  More specifically though, we played catch over the summer and played some 1-hand, 2-hand touch football games with as many as we could get together.

Since I’m only a Sophomore and this is my first year starting at QB for Sedgwick, I am beginning that process.  I am interested in playing at the collegiate level though.

Just hanging out with my friends.

Maybe I’ll be one of the lucky few to make it professionally in a sport.  If not though, I have an interest in being a Marine Biologist.

My older brother, Andrew.  He was an all-state first team pitcher for Sedgwick High School.  He helped take us to the State tournament in baseball last year.  I’d like to be as successful as he has been throughout his athletic career.  He is also my role model because he is a social person and is nice to everyone he meets.  He also cares for me and has always included me in the fun he had with his friends.  I’m much more shy than my brother.  So, it was very nice of him to include me like that.  If I can be more like my brother, I know I would be a good person.

Since we aren’t that far from Wichita, we have many good choices.  My favorite is Cracker Barrel.

I was lucky to hit my growth spurt this past year.  I grew 4 inches this past year and I’m hopeful to get some more height so that I can be taller than my dad.  He is 6’3”.