v Faces in KS: Tucker Smith - Sports in Kansas 
Warning: include(../includes/bodytag.php): failed to open stream: No such file or directory in /home/kansass/public_html/ks/news/index.php on line 36

Tucker Smith is looking for a big year for ACCHS. (photo: Lisa Smith) 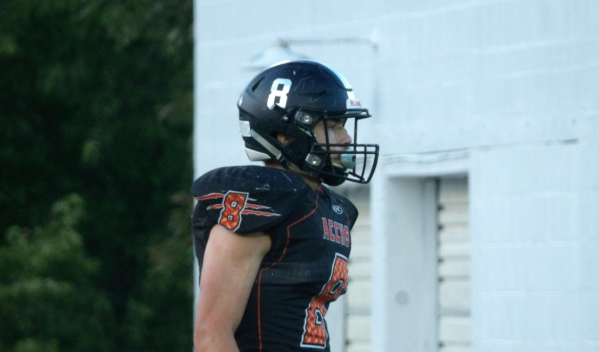 Tucker Smith is having a breakout year for the Atchison County Community High School Tigers this fall as a senior running back/slot receiver .

It’s no secret the program has struggled with some losing seasons, but Smith has been a bright spot to the program in 2019 as he has rushed for 564 yards with five touchdowns on 51 attempts over the first three weeks of the season in the Wing-T offense of ACCHS. Smith has over 650 all-purpose yards in the first three weeks. The team also sits at a 1-2 record after tough losses to 1A contenders Jackson Heights and Valley Heights the last two weeks.

Smith has racked up nearly 1,800 yards rushing as a running back in his career despite only playing in four football games last season. In addition to that, he has over 300 career receiving yards and can play slot receiver. Smith is also the return man and kicker on the team while playing linebacker and strong safety on defense. There isn’t much he doesn’t do on Friday nights. He has earned Big 7 All-league honorable mention two seasons ago as a sophomore before the school joined the Northeast Kansas League. Smith is also an all-state track and field athlete taking sixth place last year in the 2A boys 400-meter dash. As a guard, he was also all league honorable mention in basketball in 2018-2019.

Smith also gets it done in the classroom with a 4.0 GPA. He plans to go into sports medicine in college and is still awaiting his first offer to play collegiate football. His favorite subject at ACCHS is Science. Smith takes pride in being involved at the high school in many clubs and is a well rounded student that is much more than an athlete. He belongs to the Math Club, Science Club, Student Council and even made the midfield logo for his high school football field.

The Tigers returned just three starters on offense and four on defense under head coach Corey Thomas and will be back in action this Friday as they travel to Pleasant Ridge (1-2) to try to get to the .500 mark on the season. They are also looking for their first winning season since 2012 when they went 5-4. We caught up with the senior student athlete below in the latest Q&A edition of Faces in Kansas.

Chet Kuplen, Founder/CEO of Sports in Kansas, on Smith

"Sometimes we get carried away on the star players on state title teams while there are some good players at just about every high school in Kansas. Some of those players can sometimes be on teams that have struggled in the win column but those programs are working hard too. I think its important to highlight those players as well and Smith fits that as he has worked really hard to become a breakout back this year in 2A. He has great strength for his size and wouldn't be surprised if some NAIA programs start to consider him soon. This kid seems to do everything but drive the bus for his team. It'll be nice to see how he does in the 200/400 this spring as well as he was an all-state 400 runner last spring"

How did you get involved in football? When I was 5 or 6 years old, my older brothers started playing football and I just knew that it was something that I wanted to do.

Do you guys have a shot to be improved this year? Yes, we have the talent and ability to put everything together to make a solid season this year.

What makes you such a force as a player? I have the ability to break a play wide open, I run hard through contact and will fight for every yard.

What’s the atmosphere like to play football on Friday night for your school and town? It is awesome. To me, nothing else compares to playing front of the home Effingham crowd on Friday nights. The amount of people that come out to support and the energy is like no other. Definitely something I will miss as I graduate and move on.

For anyone that hasn’t seen one of your games, why come to one? You will watch a fight from beginning to end. Something my team and I pride ourselves on, is fighting whether we are winning or losing.

Who are other key players on your team? My O-Line for sure. Them guys battle in the trenches for the other backs and I to make plays. They don’t eat the glory like the skills position guys, but without my O-Line, we don’t win games and I would not be where I am today without them. I love those guys and appreciate what they do for me and our team. Trystin Myers is also a key player. He has the ability to make anyone miss with his speed and agility and makes big plays.

Favorite thing about football? I love the adrenaline and excitement. There is just something about going out on the field and giving it my all every Friday with my best friends that makes me happy.

Do you play any other sports, tell us about that, what other positions do you play? I play a couple of positions in football. My main position is Runningback/Slot Receiver. On defense, I go back and forth between Strong Safety and Outside Linebacker depending on our formation. I am a guard for our high school basketball team. I also compete in the 200, 400, 4x100 relay, and javelin in Track and Field.

What is it like to play for your coach? I love every moment of it. My Coach is a great guy and treats us all as if we were his own son. My Coach puts a lot of extra hours into our team to help us compete at the highest level every Friday. My Coach would do anything for anyone of us even if it was not anything football related and we are all grateful to have a coach that cares about us as much as he does. My Coach and I have a great relationship and without him and his efforts to push me harder everyday, I really don’t think I would be where I am today without that man.

What did you and the team do in the off-season to become better? From March to August, we worked out every Monday, Tuesday, Thursday. In the Spring, we worked out before school and once school was out we worked out at 7 a.m. We also competed at contact camps to prepare for the upcoming season.

What interest are you seeing at the next level and what are your plans? I have no offers. I am receiving attention for a couple NAIA schools across Kansas and Nebraska. I was invited to a D2 showcase camp this summer, but have yet to receive my first official offer. I plan to keep grinding for an offer and go to a school that is best for me. Academically, I plan to pursue a degree in Sports Medicine.

Who is your role model? My role model is my Dad. He is the hardest working man I know. He has taught me to always work through things rather than give up. I pride myself on working just as hard as my Dad does to make my dreams reality.

Best place to eat in your town or the surrounding area? The Dove’s Nest on Main Street in Effingham has great food and great customer service. I always get the Chicken Fried Steak with Homestyle Gravy and their Homemade French Fries. It is pretty good and I recommend Dove’s Nest to anyone that rolls through Effingham.

One thing the average person wouldn’t know about you? One thing people don’t know about me is that I am very involved in my school. I made the midfield logo that is painted on our football field. I have been in many of my school’s musical and play productions. I am involved in Science Club, Math Club and Student Council.