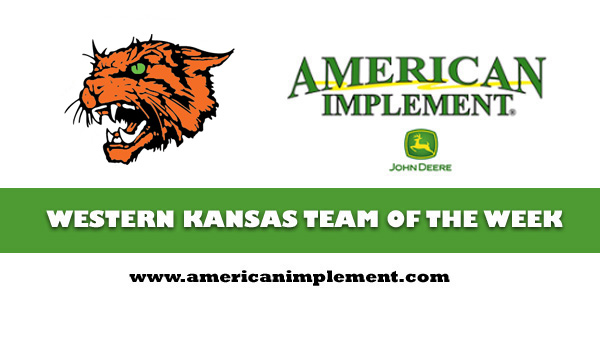 Paced by standout senior Chace O’Hair, Elkhart football captured the first win of the Jhon Haehn era with a 34-20 home victory versus Kismet-Southwestern Heights in Week 2. Elkhart led 7-0 after the first quarter and 28-12 after three quarters.

The Wildcats followed the win with a 41-12 road victory against Sublette in Week 3. Elkhart was 14-0 after the first quarter and 41-6 after three quarters. O’Hair rushed 24 times for 231 yards and three scores.

Versus Southwestern Heights, O’Hair recorded 20 carries for 173 yards and three touchdowns. He also led with 16 tackles, one for loss.  O’Hair served as the team’s punter with two kicks for an average of 27 yards. As well, senior Emmanuel Moreno has played solidly after he replaced Lane Whisennand, a two-time first team all-state quarterback who accounted for 39 scores last fall.

He has completed 11 of 21 passes for 159 yards with two touchdowns and an interception. Moreno has 32 carries for 80 yards and two scores.

Elkhart opened with a 38-13 loss versus Cimarron, though had another nice game from O’Hair. He delivered 26 carries for 135 yards and two scores. Defensively, he delivered 15 tackles (11 solo), including a tackle for loss.

This season, he has 70 carries for 539 yards and eight scores, along with 36 tackles, three for loss. He ranks fourth among Kansas 11-man players in rushing attempts, and ninth in tackles, according to MaxPreps.

O’Hair plays football, basketball and baseball. He carried a .343 average in 14 games last spring as the Wildcats finished undefeated and won the Class 2-1A state championship. On the gridiron, O’Hair has 165 carries for 1,268 yards (7.7 yards per carry) with 19 rushing scores in his career. He has 219 tackles, 21 for loss.

Elkhart was 6-4, 8-3 and 9-1 the last three seasons. The last two years yielded state quarterfinal showings, the second-best finishes in school history behind a semifinal in ’93. Haehn took over for Chris Hattabaugh, who moved down to an assistant and continues as principal and athletic director.

O’Hair (552 rushing) and Moreno (174) were the only players back from ’18 that had more than 78 rushing yards. O’Hair was the team’s leading returning receiver with three catches. Defensively, O’Hair, Moreno and senior Jaxon Hastings all return after they went 1-2-3 in Elkhart tackles last fall.