v Faces in KS: Ashton Ngo - Sports in Kansas 
Warning: include(../includes/bodytag.php): failed to open stream: No such file or directory in /home/kansass/public_html/ks/news/index.php on line 36

Ashton Ngo of Andover is looking for a big year for the Trojans. 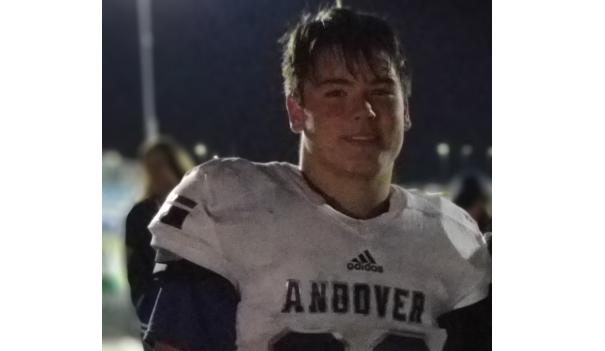 So far, he has followed that up with a big junior campaign with 19 stops over his first two games of 2019. Two of those stops have came for a loss. Ngo, a 5-foot-11, 200-pounder, had 88 stops last year including 18 tackles for loss. He also had six sacks, a forced fumble and a fumble recovery. In addition to SIK honors, he was an All-5A honorable mention pick, one of the very few sophomores honored statewide.

Ngo also gets it done in the weight room with a 290 clean, 405 squat and 265 bench. In addition to his linebacker spot, he’s also a long snapper. Ngo is also an all-league baseball player and qualified for the state wrestling tournament as a sophomore last winter.

Andover may be one of the best 0-2 teams in Kansas. Sometimes the ball needs to bounce your way and so far that hasn’t happened for Andover after the first two weeks. Andover has dominated teams in the state column but on the win column it would not look that way. This is where records can be very deceiving if you only look at records of teams. In week one, they lost on a heartbreaker to Great Bend in OT. It took a hail mary pass from nearly 50 yards to get to OT after the Trojans led the entire contest. Last week, they lost to Maize South 14-7. Andover defense has allowed 406 yards offensively so far this season while their offense has outgained opponents 769-to-406.

“After our first two weeks, we could use a little luck.” Andover head coach Cade Armstrong said jokingly.

Andover has made major improvements from last season as they lost to Great Bend 35-12 last season and Maize South, 20-3, in 2018 as well. The Trojans returned eight starters on offense and seven on defense. Eli Fahnestock, who has started the last two seasons and is just a junior, has over 400 yards passing through the first two weeks. Peyton Henry is also expected to be a big-time contributor this year but the run game has been slowed down a bit over the first two weeks.

The defense has been very solid and its much more than Ngo. Isaiah Maikori and Chandler Goodnight have also combined for 41 tackles defensively after the first two weeks. Goodnight has three sacks on the year. Quentin Born and Jacob Wolfe are also 15 tackles or more after the first two weeks. Connor Hall is also a force at 6-foot-6 and 220-pounds at defensive end and earned non-senior honors from SIK in 2018. Andover also features one of the best kickers in the state in junior David Kemp. He has a long of 49 yards this season and is being recruited at the FBS level.

“Everyone is a key player on our team. We all have to do our job in order to win.” Ngo said.

Andover is back in action this week as they take on Goddard-Eisenhower (1-1) on Thursday.

We caught up with Ngo below in the latest Q&A edition of Faces in Kansas.

I started flag football when I was in first grade.

Yes, we have lots of returning starters and lots of talent. We need to continue to get better every week.

I am quick to read plays and can finish plays.

Its incredible, the energy is unreal and a feeling that you won’t ever experience unless it’s a Friday night.

There are a lot of players on the field with a lot of talent that can do great things.

Everyone on the team is a key player and they have to do their jobs to be successful.

The intensity of the game and knowing that you aren’t just playing for yourself but for the person next to you.

I play baseball and I also wrestle.  I was all-league honorable mention in baseball and qualified for the 5A state tournament in wrestling this past year.

Playing for my coach is an honor because I know that he will do his part and draw up an amazing game plan and all we have to do is execute it.

During off season we had 7 am workouts on Mondays, Tuesday and Thursday. On Wednesdays we had 7 on 7 in Augusta.

I’ve been in contact with several schools and I plan to continue playing sports in college.

I enjoy fishing when I’m not playing sports.

Out of college with my chiropractic degree.

My favorite subject is us history, I am a hard worker and turn all my work in on time.

My father.  He is a hard-working man and is always pushing me to do my best. Also, my mother because she wants best for me on and off the field.

That I lost part of my finger hang cleaning my freshman year.