v Faces in KS: Mason Edwards - Sports in Kansas 
Warning: include(../includes/bodytag.php): failed to open stream: No such file or directory in /home/kansass/public_html/ks/news/index.php on line 36

Mason Edwards and Maize South are looking for a big year in 5A. (photo: Elly Wolf) 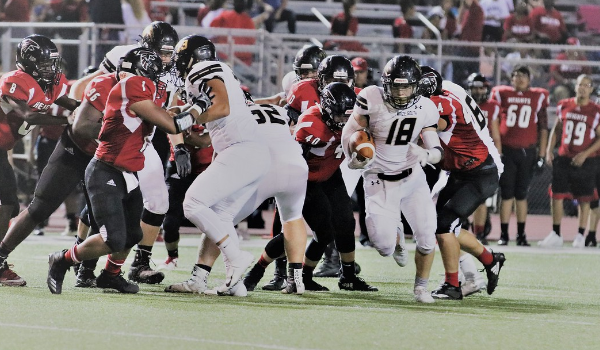 When doing previews this summer, we realized that Maize South had an opportunity to be pretty good with all that they returned from one year ago. Maybe not so much about the number of starters, just four on offense, but did have seven back on defense, but more about the quality of players they had returning for the 2019 season.

One of those players is Mason Edwards who rushed for over 1,300 yards last season for the Mavericks. The Mavericks also returned Collin Shields at quarterback, Cody Fayette at offensive line, Zach Saville at defensive line and Trevion Mitchell at defensive back. All players that are potential all-state players. Then this year there has been the emergence of Hunter Niemann in the backfield. Coleman Koehn and Brandon Bowles have also had a big start defensively.

Edwards hasn’t put up huge rushing numbers so far offensively, just close to 90 yards, but that has been to battling an injury coming into the season. He is expected to be at 100 percent coming into the week. That could be very dangerous with the combo of Niemann and Edwards. Neimann has over 200 yards through the first two weeks.

"The team is working very well together right now. We have a lot or young players stepping into roles where they are needed. I had an injury priot to week one so it has kind of limited me. I am back to 100% for this weeks game." Edwards said.

Edwards, pound for pound, is one of the strongest players in the entire state of Kansas. He benches 305 pounds, squats 470 pounds and cleans 305 pounds at 5-foot-10, 195-pounds. Edwards has seen interest from the NAIA level where he has picked up a couple of offers. He is a three-year starter for the Mavericks.

Maize South, led by head coach Brent Pfeifer, is 2-0 on the year with solid wins over Wichita Heights (40-24) and Andover (14-7). The Mavericks are back in action Friday at home against Valley Center.

We caught up with Edwards below in the latest Q&A edition of Faces in Kansas.

This feature is presented by Holmberg Wellness Group, proud to support Mason Edwards and the Mavericks. Find us online here.

At one of my soccer games as a kid, a parent from the opposing team asked to talk to my parents.  That parent was starting a junior football league football team and tried convincing my parents to let me join.  My dad was all for it, but my mom wasn’t as sure.  After a lot of other people suggesting that I should play she let me give it a shot.

My Personal goals this season are to break the school’s rushing record held by Korey Frausto and set myself up to play college football.  Team goals that I have are being the best leader I can for my team as a captain and winning a state championship.

I feel like our team this year is very disciplined and is learning what it takes to make a state run.  We are preparing everyday to be that team that makes a solid run, and I have no doubt that we can make it.

What makes me a force as a player is that I take what my coaches tell me to do and not only do I do it, but I try to so it better than haw they wanted me to.  I strive for perfection in everything on and off the field.

The atmosphere is one of a kind.  Seeing the stadium full, with everyone dressed in black and gold gets me excited.  The community support is unreal.  WE have people that just come because they want to support the high school and our football team.  After games I will have people that I don’t even know or recognize come up to me and congratulate me on a win, and they know me by first and last name.

There isn’t anything like coming to a Maize South Football game, the feeling is unique.  The energy from the crowd gets me fired up and ready to go to work with my team.  I am a force to be reckoned with and I run hard and make plays.

My entire O-line, Collin Shields, Trevion Mitchell, and Brandon Bowles are all key players, but most importantly our scout guys.  Without them we would not know what to expect on the upcoming Friday’s game. Our scout is one of the best and makes our varsity what it is.

My Favorite thing about football is that feeling after a win.  The thought that the team achieved the victory together.

I bowl for the high school and throw for our track team.  Last year I was a captain for the bowling team as a junior.  I also qualified for finals in shot put at regionals.

Playing for Pfeifer has been different every year because we have gotten smarter and mentally tougher.  He knows what we are capable and helps us achieve our potential not only as a tam but also individually.  He us strive to be the best men we can be for our future outside of football.

The off-season started the day after our last game of the previous season.  We started with winter weights working to bulk up. Spring rolled around and we started getting in shape. When summer hit we kept lifting and running to maintain and gain strength.  We also had numerous non-padded and padded camps to start learning our playbook.  I personally went to as many prospect camps as I could to work on my footwork and to get more comfortable with the ball in my hand.

I have received two offers to play at the next level.  I plan to commit after my senior season to play another four years.

Spending time with my friends and family.

Picturing my life 10 years ahead isn’t easy.  I hope to be graduated from college after playing football, with a fulltime job or possibly playing football at the highest level.

My favorite subject in school is history. I feel I am a focused student that takes care of the task at hand.  I get everything done that need to be done as soon as possible.

My role model is Ethan Richardson. When I was freshman, he was a senior.  He treated me not only as a friend but also like a brother. He showed me the importance of playing in the Lord’s name and not for selfish reason. I just look up to him because of what a great person he is and how he treated me.

The best place to eat is anywhere that I can my mom’s cooking.  No one can cook better than her!

One thing people may not know about me is that I had a tumor when I was younger and had to have it removed through surgery I have a dent in my head where it was located.