v Sports in Kansas: Statewide Volleyball Notes - 9/16/19 - Sports in Kansas 
Warning: include(../includes/bodytag.php): failed to open stream: No such file or directory in /home/kansass/public_html/ks/news/index.php on line 36 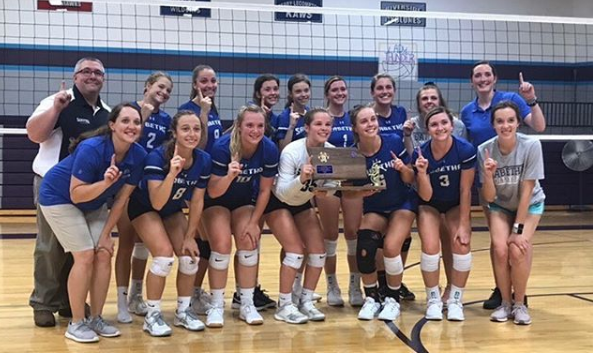 CLICK HERE FOR LAST WEEKS RANKINGS FROM THE KVA

Blue Valley North, with a significantly non-senior roster, was ranked seventh in the preseason Class 6A poll and moved to No. 1 in the Week 1 Kansas Volleyball Coaches Association poll that was released last week. BVN was 8-0 at the time of the poll and is 9-0 under coach Matt Allin.

Allin has consistently had winning teams since he took over the program in 2012. He has won at least 28 matches four times, including a 34-5 mark last year.

On Tuesday, BVN faces Bishop Miege, which dropped from first to third in the Class 4A poll after a 0-2 start.

Like many top players, Dulan spent the summer playing elite club volleyball, including an Adidas tournament where ESPN’s Maria Taylor visited her team.

Junior Carley Spachman is at an efficient .304 average with kills on 44 percent of swings for 51 kills. Senior Grace Reininga paces the squad with 20 aces, 69 digs and is team’s main serve-receiver. Both players had very limited varsity time last year.

Spachman paces with 17 blocks, and sophomore Morgan DeBow is second with 12 blocks.

Senior Julia Mullinax has run the offense well with 121 assists.

Hoyt-Royal Valley has enjoyed a great start and has a 30-1 edge in sets won. That includes 2-0 wins against Sabetha (twice), Holton (twice), Jefferson West (twice), Marysville, Oskaloosa – and a big 2-1 victory against Silver Lake on Sept. 7. Silver Lake is the defending Class 3A state champions.

Royal Valley and Silver Lake flip-flopped spots in the 3A poll this week. RV is No. 1, and the Eagles are second.

Defending 2A champion Garden Plain starts 8-1; Andale No. 1 in 4A

Garden Plain is 8-1, including a 4-1 mark and second place finish at the Haven tournament.

GP also defeated St. John and Medicine Lodge. Senior Natasha Dooley, the reigning Class 2A Player of the Year, leads the team with 4.7 kills per set and a .324 hitting percentage.

This Thursday, GP gets a rematch against Cheney. Garden Plain is up a spot from fourth to third in the Class 2A poll.

Andale, led by GP coach Gina Clark’s daughter Kaylee Bergkamp, moved from second to first in the Class 4A rankings, stood at 7-0 at the time of the poll and is now 13-1. On Saturday, Andale fell to Bishop Carroll, 15-25, 26-24, 25-20, in the finals of the Valley Center Invitational. After 16 sets, junior Katelyn Fairchild has a huge season with 4.4 kills per set (70 total) with a .342 hitting percentage. Senior Jenna Jarmer has 160 assists.

Carroll is ranked fourth in Class 5A.

2A runner-up Wabaunsee starts 11-1 behind big season from Schutter, A. Hafenstine

Alma-Wabaunsee, ranked No. 1 in both the preseason and the Week 1 Class 2A poll, has delivered several high-quality early season wins to an 11-1 start. On Aug. 31, Wabaunsee defeated Oskaloosa and Centralia by 2-0 scores.

Before this season, the Chargers hadn’t defeated Centralia since ’14. Wabaunsee’s only loss was 2-0 defeat versus Chapman. Wabaunsee graduated just two seniors from its surprising state runner-up squad last year, though both played key roles.

This fall, senior Megan Strait paces with 75 kills (3.1 per set). Sophomore Lauren Schutter has stepped up into a larger role with an efficient season. She has a .314 hitting percentage and 2.4 kills per set. She easily leads the squad with 34 blocks. Schutter played in two matches and did not record a varsity kill last year.

Senior Alexis Hafenstine, one of the state’s top back row players, and Maddy Wertzberger lead with 15 aces. Hafenstine has 6.4 digs per set with 154 total – 50 more than Barber, who ranks second on the squad.

Jackson Heights undefeated at Frankfort tournament; off to 13-1 start

Jackson Heights stands 13-1 as coach Denise Visocsky has turned around the program. JH was 10-26, 20-18 and 20-17 in the three previous years. JH has defeated Rossville and Atchison already this season.

From ’07-18, JH was a combined 0-8 against those programs. Jackson Heights’ only loss is versus Oskaloosa, a 2-1 defeat, on Sept. 10. JH has lost four in a row versus Oskaloosa.

Marshall has 14 aces, while seniors Abby Brey and Southern Raborn each have 12 aces. Marshall has 1.3 blocks per set (25 total).

Senior Jenna Pfau has delivered 119 kills (3.7 per set) for Oskaloosa. She has nearly twice the kills as any other player. Junior Sophia Rockhold, senior Jaycee Johnson and sophomore Deja Messalle are also among the leaders. Pfau leads the team with 20 aces, and is tied with Messalle with 16 total blocks.

Junior Reese Curry has 161 digs to lead the squad, while Pfau is second at 120 for five digs and 3.8 digs per set, respectively. Junior Lindsay Schupp has 89 digs, while junior Regan Curry has 83 digs.

Oskaloosa was not ranked in the preseason poll but is now No. 10 in Class 2A in the Week 1 rankings.

The Bluejays came back from a 10-20 deficit in game three to win 25-23 against host Nemaha Central to win the Nemaha Central invite. Sabetha was ranked seventh in last weeks rankings and could continue to climb.

St. James stands at 5-0, including wins against Gardner-Edgerton to open the year. On Sept. 14, St. James defeated Millard South and Millard West with 2-0 scores in Nebraska. SJA is 11-0 on sets won this season and is ranked No. 1 in 5A.

Smith Center opened 5-0 through Sept. 10 matches. All five wins have come against Mid-Continent League teams with a 2-0 victory versus Hill City, 2-1 against WaKeeney-Trego, and 2-0 versus Plainville, Ellis and Phillipsburg. Smith Center is ranked second in 2A, and Trego is ninth in 2A.

The Panther loss to rival Smith Center is Phillipsburg’s only loss this year – and Phillipsburg has a highlighted win versus Minden. Neb.

Phillipsburg was not ranked in the preseason, but is No. 10 in Class 3A