v Faces in KS: Cael Johnson - Sports in Kansas 
Warning: include(../includes/bodytag.php): failed to open stream: No such file or directory in /home/kansass/public_html/ks/news/index.php on line 36 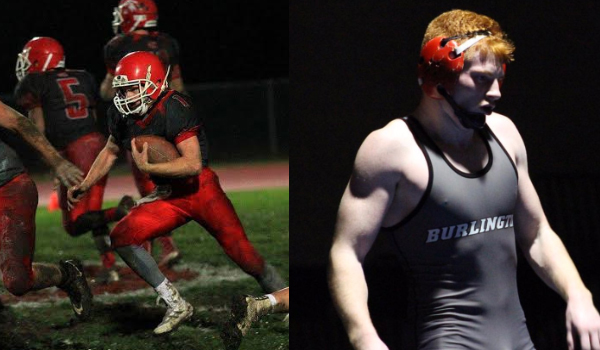 Burlington senior Cael Johnson is looking to be one of the top small school multiple sport athletes in Kansas for 2019-2020.

He already has a pretty good start on that in his career as the football player and wrestler has shined in his first three years of high school so far.

Johnson earned state runner up honors last season in wrestling last season at 152 pounds in the loaded Class 4A, losing to undefeated state champion and now Division I wrestler Korbin Riedel of Tonganoxie. He took third as a junior and was the regional champion as a freshman. He is also on his way to becoming a four-time Pioneer League champion in the sport.

Johnson will look to wrestling after football because right now he is making big plays as the Burlington quarterback and safety. He has earned some type of all league honor every year since his freshman season. He was a non-senior pick all-state selection as a defensive back in 3A last season from Sports in Kansas. Johnson has over 200 tackles in his career with nine interceptions from his defensive back spot. As he directs the single wing offense as a quarterback he has 1,654 yards rushing entering the year. Johnson opened up Friday with 152 yards rushing with four touchdowns and also threw for 72 more yards as Burlington defeated Council Grove, 46-20 . On defense, Johnson had nine solo tackles. He entered the year as one of the “25 to Watch” across the state from Sports in Kansas.

It’s much more than sports for Johnson though. He has a 3.91 GPA and tells us science is his favorite subject in school because he likes to figure out how things work in the world. He plans on competing in a sport at the next level and would like to major in pre-law.

Burlington, led by head coach John Petrie, takes on traditional 1A power Olpe (1-0) this week at home. We caught up with Johnson below in the latest Q&A edition of Faces in Kansas.

This feature is presented by Xyngular, proud to support Cael Johnson and the Burlington HS football team!