v Faces in KS: Riley Philbern - Sports in Kansas 
Warning: include(../includes/bodytag.php): failed to open stream: No such file or directory in /home/kansass/public_html/ks/news/index.php on line 36

Riley Philbern is primed for a huge senior season for Hoisington. (photo:Hugo Gonzalez) 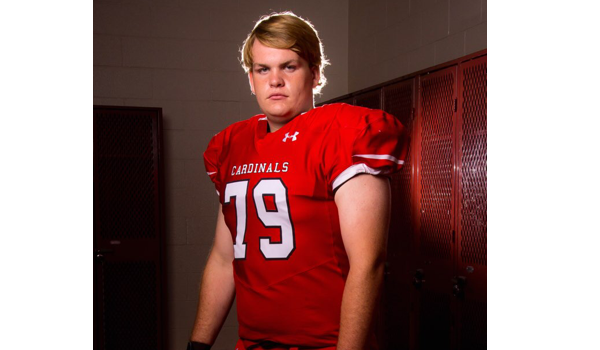 Hoisington (2A) football is primed for a huge season in 2019, it’s no secret. Yes, they return one of the best players in all classes of Kansas in Wyatt Pedigo, a North Dakota State commit at the Division I level. That is also no secret.

But it is much more than Pedigo on this Cardinals team that returned seven offensive starters and eight defensive starters from last years 9-3 team. Another big-time playmaker for Hoisington is senior lineman Riley Philbern.

The 6-foot-2, 270-pounder is a three-year starter at right guard and defensive tackle. Hoisington has had a lot of solid success on both sides of the football as of recent whether that’s past stars Hunter Hanzlick and Landen Urban or players like Philbern and Pedigo.

Philbern also gets it done in the weight room as he features a 475 squat and 300 clean. He is also a multiple sport athlete, winning the USAWKS folk style championship in wrestling last year. He also took fifth in the loaded 3-2-1A division featuring some of the best Kansas has to offer.

Philbern is also an outstanding student at Hoisington High School with a GPA of 3.86.  He plans to go on to play football at the collegiate level and is hoping many opportunities arise after a big senior football season.

For now its football season and the Cardinals, led by head coach Zach Baird, are off to a very solid start as they beat Pratt, last years 3A state runner-up, 37-13, on Friday in Pratt. The Cardinals will again go on the road as they face fellow CKL opponent Nickerson this week. Hoisington won the game 28-14 last year against Nickerson but loss in the opener against Pratt, without Pedigo, 34-0.

We caught up with the outstanding senior multiple sport athlete below in the latest Q&A edition of Faces in Kansas.

This feature is presented by Town and Country Supermarket in Hoisington. Proud to support the Cardinals. Best of luck this season. See our ad in the right corner!

“He has great size and leverage obviously with his wrestling background. He is straight up nasty on the line and that’s a compliment! His video jumps off the page. He will need to get a little stronger in the weight room going forward in some lifts but the kid can flat-out play and is one of the most underrated players likely because he’s 6’2.5”. I don’t see very many people handling him one on one in 2A or the CKL this year. I didn’t know a lot about him last year but I ran into Coach Baird’s father, a former KU football player back in the day, at a camp this last spring and he told me some great things about Riley. I then checked him out and was overly impressed with what I saw. They have some dudes and they are a major contender to win it in 2A. They all know it wont come easy though as it’s a loaded class. I’ve also followed the program a little closer over the last few years as I am on local radio w/ Cole Reif every Friday breaking down statewide matchups. They’ve really had a lot of talent there over the last five years. CKL has some quality football.”

My dad played in high school so I wanted to play

I think we do

My motor and strength

It’s really fun, everyone from school is there and the stands are full from other people in town

To see how I play and why our team is successful

I wrestle and do track. I am the varsity 285 in wrestling and I throw shot out and discus in track.

It’s a lot of fun, he has a special bond with us but he’ll push you to be the best you can

My favorite subject is weights. I get my work down. My gpa is a 3.86