v Nex-Tech Wireless Athlete of the Month: Josh Schulte - Sports in Kansas 
Warning: include(../includes/bodytag.php): failed to open stream: No such file or directory in /home/kansass/public_html/ks/news/index.php on line 36

Josh Schulte at a cross country meet this fall for Victoria. 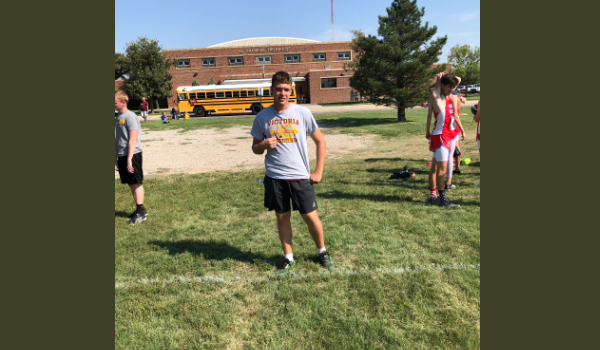 On the first Friday of fall camp, Victoria football coach Doug Oberle offered plenty of praise for Josh Schulte, one of the Knights’ two seniors. Schulte had played well in spot time as a junior and has moved into a starting role on both sides of the ball.

“Josh Schulte has been huge for us this summer,” Oberle said. “Josh showed up everyday that he was supposed to show up. Josh has worked his tail off to get better.”

Additionally, Schulte is participating in cross country and playing football for the second straight year. While this is rare, some athletes, most notably Axtell quarterback Quinn Buessing, have shined at both in the Class 1A/eight-man ranks. Victoria had Jublain Wohler, an all-state runner and a football reserve, in the mid-2000s.

However, Schulte is extremely unique.

He is a lineman who also runs cross country – and is the Knights’ top runner. Schulte normally runs in the morning around 6:50 a.m. Then, he heads home for a quick shower before school. After school, he has football practice for several hours.

“Trying to stay hydrated as much as possible,” Schulte said.

The 203-pound Schulte is the team’s second-biggest player behind Victoria’s other senior Kirk Huser, a standout lineman.

“He is going to do both again this year,” Oberle said. “I can’t imagine how difficult that is.”

Later in fall camp, Schulte went through another change. He first was going from tight end to guard, but Oberle switched him to center.

“I learned a lot about the importance of the first step and getting off the ball,” Schulte said. “Moving the right direction right away, because the other guy is going as soon as the ball is snapped. We played tight end, a lot of times, you are getting on a linebacker, who is multiple yards off the ball, and you have time, whereas a nose guard is right in front of you.”

“He did a great job,” Oberle said of Schulte.

Both Otis-Bison and Victoria have won at least seven games in the last two seasons, though O-B returned the more experienced front with Kendall Steinert and Hunter Mitchell.

“As one of the only two seniors, I definitely feel a need to step up and try and provide a role model, and an example for some of the younger players on the team,” Schulte said. “We have a lot of freshmen, and a lot of people who haven’t played before, so having experience and being a little older helps a lot.”

Huser and junior running back Jayvon Pruitt (101 total yards) were the only two returning starters.

“With an Oberle coached football team, they are going to be technique-sound,” Otis-Bison coach Travis Starr said. “They are going to play hard. They are going to do all the things they need to do. Obviously, there are some guys you have got to key for their team, but they are solid across the board.

“For as young as they are or whatever you want to say – inexperienced or whatever – they are still good,” Starr said. “And they are going to play hard, and they do the right thing.”

After the game, Schulte wore a big smile outside the Victoria locker room in the Otis-Bison fieldhouse. He said the Knights “definitely did play well.”

It was around 10 p.m., and at 11:20 a.m. Saturday morning, he was expected to have his first cross country race of the fall at the Monarch Invitational at Thomas More Prep-Marian in Hays.

Schulte went the 47 miles from Otis to Victoria on Friday night, and then the 12 miles Saturday morning. The race splits the juniors/seniors and freshman/sophomores.

In the junior/senior race, Schulte posted 19 minutes, 23.42 seconds to pace the Knights. He finished ninth in the 35-runner race.

Overall, including the freshman/sophomore times, he placed No. 14 out of 77 runners.