v Faces in KS: Syris Dunlap - Sports in Kansas 
Warning: include(../includes/bodytag.php): failed to open stream: No such file or directory in /home/kansass/public_html/ks/news/index.php on line 36

Syris Dunlap is looking for a huge year for Liberal as a four year starter. (photo: Chet Kuplen) 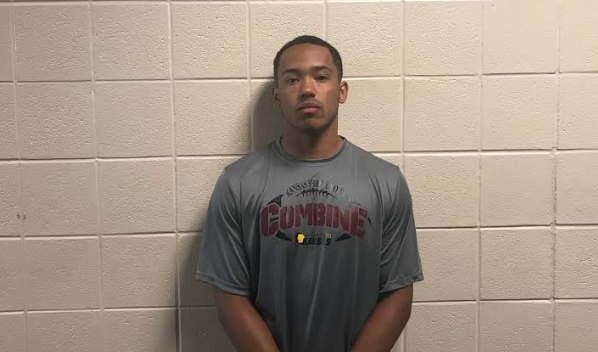 Syris Dunlap of Liberal HS is one of the more unknown players across the state of Kansas. It may have to do with the team struggling last season but let’s make not mistake about it, Dunlap is one of the elite playmakers in high school football in Kansas.

Dunlap, who stands 5-foot-9 and 170-pounds, may be the fastest football player in Kansas. We verified that this summer as he ran a 4.4 forty-yard dash at the Kansas Shrine Bowl Sports in Kansas combine. He is also a freak in the weight room for his size as he squats 460 and cleans 305 pounds. He also has a 38-inch vertical leap.

Liberal, who is led Jason Dunlap, the father of Syris, is ready for a much-improved season. They return eight starters on each side of the football for 2019.

His father was a former all-state player for Liberal back in its dynasty days under Gary Cornelsen. Liberal played for seven state championships out of the 10 in the 1990s which included four state titles. Liberal has five titles as a school in football. They also have too many state track and field championships in girls and boys to count. The school also produced multiple Division I players, NFL players, and NBA players in the 1990s, to name a few that included Martin Lewis (NBA), Melvin Sanders (NBA), Jerame Tuman (NFL), Lamar Chapman (NFL).  Most recently they’ve had Britton Abbott go on to shine at Oklahoma State as a fullback/cowboy back who was a walk-on to the program and the quarterback at Liberal HS just before Dunlap.

While Liberal may not be the Liberal of the 1990s, they still have some talent and a major talent in Dunlap. Look for him to shine when he has the football in his hands and to pick up recruiting interest this season. We caught up with him below in the latest Q&A edition of Faces in Kansas.

I was born into. My dad was coaching at Liberal high and he was the one who introduced me to the sport.

My goals for this season are to better myself and my team. Also to win a conference championship.

I believe that we do have a shot with all of the returning starters from last year. Well just have to put it all together as a whole team.

I am highly a competitive person. I want to be great at everything I do and I feel I have the skill set to do so.

It’s a very special one, everyone is so close to each other that the fans, players and coaches feel the intensity and get goosebumps. Its very hard to describe.

I am a electrifying player than can make anything happen at any moment in time on both sides of the ball.

Football brings people together. It teaches you lessons and morals that you can carry for the rest of your life.

I play Basketball, Track and Baseball as well. In basketball I am a point guard. In track I am a sprinter and a jumper and in baseball I play outfield.

My coach is a very intense person. He always wants to better himself and everybody around him.

We had weights every morning at 7am, Monday through Friday. We put blood sweat and tears into our workouts this summer.

I am interested in playing at the next level, if that’s in track baseball or football. I am willing to do everything or whatever the school needs me to do.

Spend time with my family.

I see myself coaching and teaching.

My favorite subject is English. I am a very energetic and outgoing student. My GPA is a 3.5.

My role model would have to be my Father. He has thought me so many lessons and he has made me the person I am today and always will be.

In my opinion it is either Billy's  or big bites.

I participate in the School musical every year. It is a great way to interact with people and build new and better relationships