v Faces in KS: Brady Dinkel - Sports in Kansas 
Warning: include(../includes/bodytag.php): failed to open stream: No such file or directory in /home/kansass/public_html/ks/news/index.php on line 36

Brady Dinkel is ready for a huge 2019 for St. Francis (photo: Shawna Blanka) 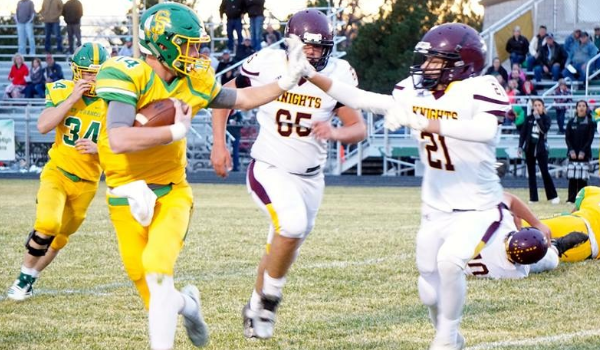 St. Francis, located in the Northwest Corner of the state with a population of around 1,300 people and minutes from the Colorado border, has been one of the consistent 8-man programs over the last five years. St. Francis High School senior Brady Dinkel is back for his fourth year as a starter for the program in 2019. It seems like he has been around forever if you follow Kansas high school 8-man football.

For St. Francis that is a good thing as Dinkel had 1,049 rushing yards and 20 touchdowns last season while also throwing for seven more. He also had 55 tackles as a safety on the defensive side of the ball with three interceptions. Dinkel is one of the top returning two-way players in the small school ranks of Kansas.

Dinkel also has great size at 6-foot-2 and 180-pounds. Dinkel is the leader of the single wing offense under head coach Nick Fawcett at the quarterback spot, which is really a running back, but he can play just about every skill position on the field if needed. He’s one of the most versatile 8-man football players in the state of Kansas. Dinkel is a multiple time all-league selection and honorable mention all-state selection.

St. Francis does lose Sports in Kansas 8M-I player of the year Jordan Raby to graduation but returns five starters offensively and four starters defensively. Sainty, led by head coach Nick Fawcett, went 11-1 last season before falling to eventual state champion Central Plains in the 8M-I semifinals. Saint Francis is 29-16 all-time in the Kansas playoffs in both the 11-man and 8-man ranks combined. They have one state runner-up finish with that coming in 2016 when Dinkel was a starter as a freshman. The Indians have made eight football state semifinals in school history with all of those coming from 1996 on.

Dinkel and company are ready for a big 2019. We caught up with the outstanding senior below in the latest Q&A edition of Faces in Kansas.

When I was younger I would be outside, throwing a ball onto the roof waiting for it to come down and try to catch it. Ted Crabtree, whenever he got home from practice would take time out of his busy day to come play catch with me. He was always one of my biggest role models growing up.

We do have a very good shot. All of our players get along most of the time and always push each other to be the best competitors we can be. Holding each other accountable during the summer to make it to weights, camp, etc.

I think my versatility and awareness makes me a force as a football player.

The atmosphere is crazy. A lot of people come out to watch us play and the energy is always high. Just the feeling that everyone there takes time out of the evening and into the night to come out and watch us play is a really great feeling. It’s always nice to go out for lunch and see people already parking vehicles along the football field in preparation for the night ahead.

You will really get the small town feel. Everybody is so welcoming and everyone cares about friday nights. When going out onto the field for warmups and already having people there saving a seat to watch really shows you how much they care about us. That’s just the people. I would say the reason to come to one of our games is to show how much love we have for the game itself.  A very hard working group of young men coming together to play the game we love. We don’t care if we win or lose but we will always give our teammates and our town 100%.

My favorite thing about football is always getting pushed and pushing others to be the best athlete and person they can be.

I also play Basketball and I run track. We don’t really have set positions in basketball. I run the relays and 200 in track.

It is a ton of fun. He brought in a somewhat new coaching staff that make football fun. He always allows us to have a little fun but when it’s time to work he expects us to be ready and paying attention.

We hit the weight room hard and competed in 7 on 7’s.

I could see myself studying something in the agriculture or outdoors.

My favorite thing to do when im not playing sports is Fishing.

Hopefully married and working in the outdoors enjoying life.

My favorite subject is history. I would say I'm an ok student. I’m definitely not the smartest but I will always show up to class on time and be ready to work. I have a 3.4 gpa.

The best place to eat is a toss up really. Diamond R and Park Hill are both super good and always a go to.

I enjoy singing but i’m not very good at it.