v Faces in KS: Trey Krause - Sports in Kansas 
Warning: include(../includes/bodytag.php): failed to open stream: No such file or directory in /home/kansass/public_html/ks/news/index.php on line 36

Trey Krause is a player to look out for in 5A for Olathe West. (photo: courtesy of Krause) 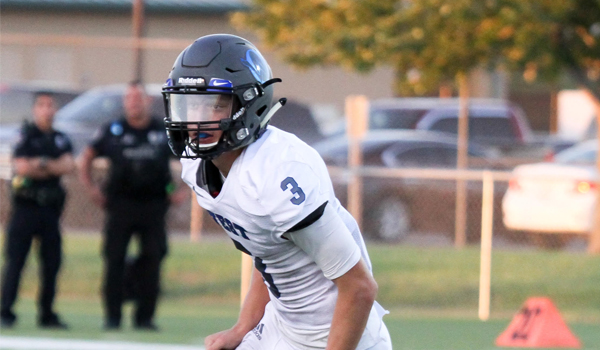 Olathe West High School football came out of nowhere last season to make a state semifinal appearance in their first ever season of varsity football. The Owls were an unknown coming into the year as a brand-new varsity program after playing a junior varsity schedule when the school opened in the fall of 2017. After a deep playoff run, the Owls were put on the map.

A player that had a hand in the success last season was then sophomore Trey Krause. Krause, now a junior at 6-foot-1, 185-pounds, is ready for a huge season as a safety in 2019 for the Owls. Krause is one of eight returning starters on the Olathe West defense this season after registering 118 tackles last season, two interceptions, one forced fumble and a fumble recovery. Krause, along with his brother Zac the Olathe West quarterback last season who graduated, were instant impact players to the program as Zac transferred in last season from Olathe North to play his final season with his brother. As it turned out, it was one heck of a decision. Zac was Olathe West Offensive MVP, while Trey was the Team Defensive MVP. Zac is now a freshman quarterback at Northwestern in the Big 10.

For Trey’s efforts, he was among the tackling leaders in Kansas and a second team Non-Senior pick from Sports in Kansas last season. As of September 1st, Krause can now hear from college coaches and has had several interested from the FCS and Division II ranks.

Trey also gets it done in the classroom with a 4.11 GPA and his favorite subject is math.

Olathe West, led by head coach T.J. O’Neill, finished 5-7 last season on their way to a semifinal appearance in 5A. In addition to the eight starters on defense, the Owls return nine players defensively. Gavan McDaniel rushed for over 1,000 yards last season while Connor Delong is back after nearly an 800 yard season as a receiver. Caden Barnard is also back after 500 plus receiving yards in 2018. Jackson Novacek is also expected to be a breakout player in 2019 after having nearly 200 yards and three scores in 2018. Sam Butler also returns defensively at linebacker where he had 96 stops last season.

My first football memory was playing catch with my Great-Grandpa Collins when I was around three. Later, my brothers and I got Chiefs jerseys and a helmet for Christmas and our living room turned into a football field. Even though my older brothers would trample me, I loved the game. I guess I owe them for teaching me to be tough. I would play football on the sidelines during my brother’s practices and joined in when I could. I couldn’t wait for it to be my turn.

Last season was amazing: earning 118 tackles, playing with my brother, and working as a team to go to State Semi-Finals. I have been working hard on the off-season to again support my team in tackles and head to playoffs again.

You always have a shot! Last year we surprised everyone by going to the Semi-Finals during Playoffs. We lost some key seniors, but we are more experienced. Some of us earned time playing against Junction City’s varsity football team our freshman year. Due to the new school opening, the current juniors have had the varsity coaches since our freshman year.

Coaches have told me that my agile and explosive footwork, my intuition to know where the ball is going, and my ability to make tackles in space are keys to stopping the offense. I think I get my pre-snap reads quickly and I am coachable in game adjustments and practice. I strive to get better.

In our school you can feel the anticipation for the game during the week. We have great fans and support from the administration.

You get to see one of the most innovative teams in the area building new traditions and challenge the status quo.

Football is the ultimate team sport. Everyone must know their job, do their job, every time with all they have… from varsity starter to freshman first time player.  When that occurs consistently, amazing things happen.

I am so appreciative of the team culture we have and the positive leadership of our coaches.

My favorite thing about football is the adrenaline spike I get on the first few plays of the game. I also love being around my teammates and being able to celebrate each other’s successes.

I play basketball and run track. In track I participate in the long jump and sprints.

I love playing for my coaches! I look forward to our practices due to their excitement while they push us harder. All of our coaches can relate to us players which creates bonds and relationships beyond football.

We hit the weight room every chance we got. Also, most of us participated in other sports to stay in shape or to get faster this off-season.

I am excited to see what happens at the next level as I definitely want to play in college. Right now Penn, Western Illinois, North Dakota State, Northwest Missouri State, and Missouri Western State are watching my season.

My favorite thing to do is to hangout with friends and play NCAA.

I see myself coaching or being an Athletic Director at the college level.

My favorite subject so far is mathematics. As a student I turn everything in on time and try to be the most respectful kid in the class. My GPA is 4.11 after getting a 4.2 last semester.

My role models are the Ayres Family in Lynden, Washington. It was hard moving suddenly halfway across the country, leaving family and friends. When we moved to Washington, they believed in me right away and continuously encouraged me. Evan and his dad were my coaches.  Evan’s mom was like an adopted grandma who would invite the team to their home on the lake.  She would send us flying off the tube. I hope that I include and encourage people like they did and still do.

Best place to eat in the morning is Mom’s Kitchen in downtown Olathe.

I can quote almost all 9 Seasons of The Office. Memorizing comes easy to me and I might have watched it a little too much.

My brother, Zac Krause, was honored by Sports-In-Kansas last year, and now I am fortunate enough to have this honor too. It is very meaningful to me and I appreciate the opportunity.

Last year, Zac and I were able to contribute on opposite sides of the ball and make it to the State Semi-Finals together in the first year of varsity football at Olathe West. He pushed and expected me to make a difference on the team. At our end of season football banquet, he won team Offensive MVP and I won team Defensive MVP. Being able to share that season together is the best thing I have ever had in football. Now, he is playing QB at Northwestern in the Big10 conference! I plan to join him in the college ranks soon!