v Faces in KS: Carson Cox - Sports in Kansas 
Warning: include(../includes/bodytag.php): failed to open stream: No such file or directory in /home/kansass/public_html/ks/news/index.php on line 36

Carson Cox is one of the top returning linebackers in 3A. (photo: Stephanie Meier Photography) 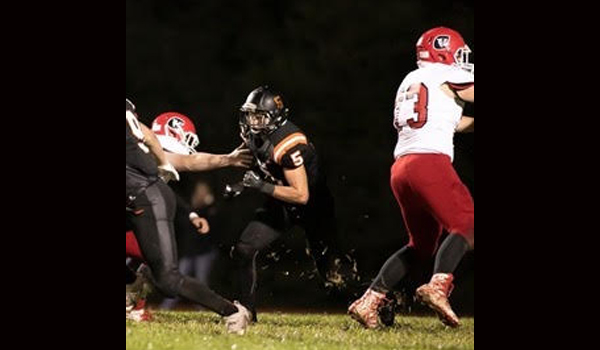 Beloit High School senior Carson Cox and the Trojan football team are ready for a big season in 2019.

Cox joins a talented senior class to be a breakout team in 3A this season. Beloit returns Hudson Gray (QB) as featured on Faces in Kansas, Creighton Johnson, Vincent Palen and Grant Arasmith this season for head coach Brad Gober.

Cox also becomes the second member of his family to be featured on Faces in Kansas as his brother, Caydren, was an all-state linebacker at Beloit a few seasons back. Carsons stands 6-foot-0 and weighs 185 pounds at his linebacker and running back positions.

Cox is primed to be one of the best linebackers in 3A this season after racking up 92 stops last season. He also had 91 stops as a sophomore. He earned all-state honors from Sports in Kansas on the non-senior team a year ago.

Cox is also part of the state runner-up team in basketball last season in 3A along with several of the other team members on this years football team. Cox averaged 12 points per game as a sophomore. He had one heck of  a state tournament in 2019 for the Trojans as he had a first half that saw 20 points scored including six of six three pointers against Girard in the title game. He also scored 11 points and had seven assists in the state quarterfinal. Cox averaged eight points per game last season in basketball for the Trojans.

Beloit returns six starters on their offense and four starters on their defense. They open up the 2019 campaign on the road against Fairbury, Nebraska. We caught up with Cox below in the latest Q&A edition of Faces in Kansas.

Chet Kuplen, CEO/Founder of Sports in Kansas, on Cox

“There certainly are some pieces back with Beloit as we’ve profiled some of these key athletes in multiple sports over the last two school years including Cox and Gray in football then Palen in basketball. Carson should be ready for a huge year after having 90 plus tackles in each of the last two seasons. They do have a pretty loaded district with the likes of Scott City and Colby.”

I was introduced to the game at a young age, since my dad played college football at Bethany and coached college football and track at Doane College. My brother Caydren was probably the first person to teach me the game just from playing 1-on-1 in the backyard or playing him in Madden. He would always take me with him when he would go play football with friends.

My goals for our team would be to first win our districts and get the #1 seed in the playoffs, and to go undefeated in the regular season. My second goal is to make it further in the playoffs than we did last year, we made it to the second round and got beat by Scott City. My last goal is to win a State Championship, and I truly believe we have the talent here to do that.

Yes, I believe we have the playmakers to make it far this season.

I’m aggressive, physical, I can read offensive lineman well and I’m quick. I also think I have a high football IQ and I can make decisions fast.

It’s great, since it is a small community, it brings everyone together on Friday nights. And our stadium is one of the oldest in the state which truly makes it special.

Our games are fun to watch because we all fly around and hit people. Also just coming to the game there is a lot of energy that the fans show.

Hudson Gray at QB can sling it and is athletic, Vincent Palen at WR and CB, he is athletic, quick, shifty, and can lock dudes down, Creighton Johnson is a 6’0 240 O Lineman and DE who is strong and disruptive.

Getting a tackle for loss or making a big play in general and celebrating with your teammates is my favorite part.

I also play basketball and we had a very talented group last winter. I knew we could go far and we did. We should have won State but we got to taste what it’s like to be on that stage so I think that we are built for a return next season. I play shooting guard and I’ve been a starter since my sophomore year. I averaged 12 ppg my sophomore year and was selected as All-state Honorable mention.  Last year I averaged 7 ppg and was 1st team all-league.  For football another position I played was fullback my junior year, and my sophomore year I started at tight end. This upcoming season I will start at running back and I will also be at wide receiver some.

It’s fun, Coach Gober is a coach you just love to play for. He is very energetic so practices are always live, especially with the big speaker we listen to during practice. Also he builds relationships with each player and earns their trust, and he treats his players like family.

Lifting weights every day is the most important part of the off-season, we also went to a couple 7v7 tournaments.

I currently have one offer from Concordia University in Nebraska and other NAIA colleges have been contacting me.  I’m hoping to get more looks from JUCOs and D2’s.

My favorite thing to do when it’s the off season is to play Xbox, hangout with friends, and lift weights.

Kind of hard to tell at this point, but I think I’ll have a job that I hopefully love, and living in a nice area.

My favorite subject in school is probably Graphic Design or Digital Media Creations. My GPA is a 3.3.

My role model is my late grandfather, he served in the Korean War and when he got back to America he didn’t have very much money at all, but he started farming and became a successful farmer after a long time coming.

We don’t have a whole lot of options in Beloit, but I would say Plum Creek or Tejavans are solid choices.

I’m pretty quiet until I get on the field/court.

Thank you for the interview!