v Faces in KS: Reece Struckhoff - Sports in Kansas 
Warning: include(../includes/bodytag.php): failed to open stream: No such file or directory in /home/kansass/public_html/ks/news/index.php on line 36 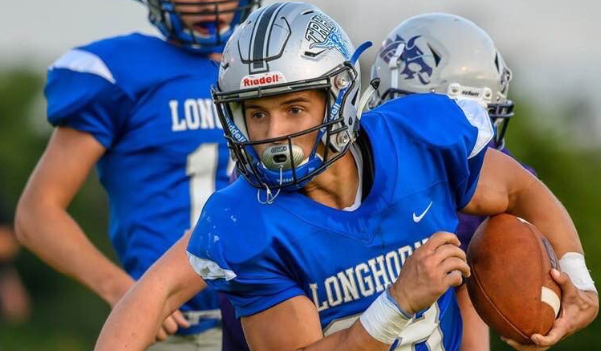 Thunder Ridge High School, located in Kensington, senior Reece Struckhoff is pound-for-pound one of the strongest players in the state of Kansas

Struckhoff, who could play in a variety of spots this year including halfback, quarterback, linebacker or cornerback, stands 5-foot-10 and weights 190-pounds. He bench presses 350 pounds, squats 445 and cleans 305 pounds. Struckhoff could be one of the most versatile players in the 8-man ranks of Kansas for 2019.

Struckhoff, who sat out last year after transferring from Stockton High School, is primed for a huge senior season for the Longhorns. As a sophomore in 2017, he rushed for over 1,000 yards. He is also an all-state power lifter, averaged 13 points per game in basketball last season and is a state qualifer in the sprints in track and field.

He also gets the shot to play for his cousin, Joel Struckhoff, who is the head coach at Thunder Ridge. If that name sounds familiar in 8-man football, it should. Struckhoff holds Kansas records for rushing yardage, points scored and touchdowns in a career at Thunder Ridge.

Reece also holds multiple offers from juco and NAIA programs in Kansas and could turn some heads this year with a breakout year.

Thunder Ridge has a state title in 2011 with a runner-up in 2012. Located in Kensington, Kansas they were the formerly Kensington West Smith County High School with state titles in 1979 and 1994. The Goldbugs were a school from 1929-2008 before consolidation with Agra-Eastern Heights to form Thunder Ridge. The two programs, Kensington and Thunder Ridge, have featured the likes of Kirby Rust, Jason Rice, Spencer Levin and Joel Struckhoff, some of the best 8-man football players of all-time. Eastern Heights was also the home of former KSU lineman Logan Robinson who stood 6-foot-9. There has been no shortage of football talent in the area with powerhouse Smith Center being a little less than 15 miles away.

Thunder Ridge is coming fof a 5-4 campaign in 2018 but with the addition of Struckhoff could be a team worth looking for in 8M-II this season. The Longhorns were recieving votes in several of the 8M-II preseason polls across the state.

We caught up with the senior below in the latest Q&A edition of Faces in Kansas.

Chet Kuplen, CEO/Founder of Sports in Kansas, on Struckhoff

“This kid has done a lot this off-season to make sure his name is known. He came out to our combine in Dodge at the Shrine Bowl and then we also saw him at a camp in Salina this summer. He looks the part too and passes the eye test. Now all we are waiting for is to see what he can do on Friday Nights after sitting out last season. There aren’t many players in Kansas that have a 4.6 range 40 that bench press 350-pounds at the linebacker position. I think he could turn into being one of the best 8-man players in the state this year.”

I got involved in football when I was very young playing backyard football with my cousins. I would say I got really involved in the sport when I was a ball boy for our state team in 2011. I went to every high school practice so I was always around it.

My goals for the team would be winning the State Championship. We have come a very long way since our freshman year so it would be pretty special. For myself I would like 1,500+ rushing yards.

Yes, we have been working so hard in the weight room for years and we are hoping for it to pay off. We graduated some good seniors from last year so we hope to find some players to fill in.

I feel like for me it would be that I can read the field very well and too add some strength and speed. But I think the most would be being able to pick up on opponents tendencies during the game.

The atmosphere here in Kensington is one of a kind! We may be a small town but we have some die hard fans. Nothing gets better than seeing our stands full and people standing behind the sideline. Its a tradition our town has had since we were the Goldbugs.

That they would get to see small town football at its finest. Especially since we are 8man school where there are very many big hits and exciting plays in every game, but I think they would enjoy our loud crowd.

My favorite thing would probably the bond that you build with your teammates. We spend countless hours together in the weight room and football field.

It is one of the best things. I grew up around him when he played in High School so it was pretty cool to have him come back and coach us. Everyone used to look up to him when he played here so it's a pretty special thing to have.

We lifted 5 days a week together with conditioning after we lifted. Also sometimes we gather before weights and run through are routes together.

I have talked to a few colleges but I have received offers from Bethel, McPherson, and Dodge City Community College. I plan on going to college to get my degree and play football.

I would say hanging out with “The Boys” which is my group of friends that are towns calls us by, Also I like to go to the lake in the summertime and ride our Jet Skis,

Graduated from college with a job working with athletes

I would say it would have to be History, I am an A/B student and 3.5 GPA

I would say  Coach Struckhoff. I grew up around him and always looked up to him when he was breaking the rushing record in High School. He always has pushed me since he came back and is helping me get to the next level.

I would say Rusty Tractor because it's our only restaurant in town.

That I enjoy being a role model to the younger kids. Especially helping the underclassmen with their lifting form.

That I take my lifting very seriously I never like missing my workouts.