v Faces in KS: Hudson Gray - Sports in Kansas 
Warning: include(../includes/bodytag.php): failed to open stream: No such file or directory in /home/kansass/public_html/ks/news/index.php on line 36 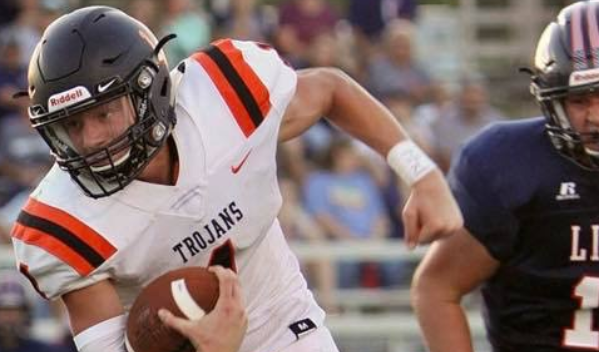 It’s safe to say Beloit High School senior quarterback Hudson Gray is ready to get back on the field on Friday nights this fall. He will enter his third year as the starting quarterback for the Trojans after battling an injury one season ago that cut his junior season short in week three of the 2018 football season.

Gray is primed for a big senior season. We do know one thing, when Gray is on the field he has shined. Over three games last year, he threw for nearly 500 yards and had six touchdowns to zero interceptions before injuring his fibula against Minneapolis in week three. As a sophomore in 2017, he passed for 992 yards with 19 touchdowns to just six interceptions.

Gray also has great size at the position at 6-foot-1 and 200-pounds. Not only is he big, he can also move very well for a 200-pound quarterback, plus he has great arm strength. The senior has also got it done in the weight room with a clean of 305 pounds. He’s also a rare lefty quarterback.

It’s no surprise that Gray has some athleticism. His mother, Linsday Gray (Eck), was one of the the best track and field athletes in Kansas history for Beloit St. John’s graduating in 2000 with the second most individual titles (12) in Kansas history as an individual only second to Jackie Stiles (14). She was a state record breaking hurdler and jumper that went on to run at Tennessee and Wichita State. His uncles, Lance and Logan Eck, were both football stars at Beloit High School, where Lance was also 60+ foot shot put thrower back in 2003 before signing on to Wichita State, then later played football at Butler CC. His aunt, Lauren Eck, was a standout track and field athlete that also ran for the Shockers.

Gray may be a breakout player to look at this season but more importantly he gets it done in the classroom with a GPA that he says is never under 3.9. He was also a member of the Beloit High School basketball team that took 3A runner-up last season. Gray also participates in track and field in the spring.

For now, he is looking for one last ride with a special group of seniors that he’s played a lot of ball with. There’s also a lot of promising players back for the Trojans in 2019 including Creighton Johnson on the lines and Carson Cox at running back and linebacker. All-State basketball player Vincent Palen is also back and will shine for Beloit at receiver and corner after leading the Trojans to a state runner-up finish in basketball for 3A in 2019. Grant Arasmith is also expected to have a big year and can play multiple spots including backup quarterback where he stepped in for Gray last season. Beloit returns six starters on their pro-gun offense and five on their 4-3 defense led by third year head coach Brad Gober.

Chet Kuplen, CEO/Founder of Sports in Kansas, on Gray

“He’s a little under the radar to many, as he should be, because he didn’t get the junior year like most of everyone did last year. Otherwise you may be looking at a kid that threw for 1,500+ yards last season and 20+ touchdowns returning for a senior. That’s why its so important to check so many kids out because injuries do happen and its part of the game. I saw him in Salina at a camp this summer and he looked ready to go. Nice size and a big arm lefty with accurate strikes. On another note, I always notice things like this and he’s one of the most respectable kids we’ve had the chance to cover/talk to. Hoping for a big year for him and the Trojans. They have some competitors back and the chance to surprise some people. It’s a solid group of athletes in this 2020 class at Beloit and to think the Vetter kid over at Wamego - that is the state’s best return man in my opinion - was part of this before his family moved a while back too. Should be a good year!”

Gray Drug and Fountain would like to wish the Beloit High School Trojans best of luck in 2019-2020. Proud to support the Trojans!

I was raised on football. Ever since I was a kid, I’ve been surrounded by sports. I grew up watching my uncles play JUCO football at Highland and Butler, and that is where my love for the game began.

All of our guys have worked extremely hard from the time last season ended, up until the end of this summer. We hope all of our work pays off and to make a deep playoff run.

If we can put the pieces together and stay healthy, we have a good chance in 3A.

What makes me such a force as a player is my ability to stay in the pocket and take hits, and still put the ball where it needs to be. I believe this is something that can’t necessarily always be coached. I tend to throw the deep ball extremely well. Another thing that makes me a force is my ability to scramble or gain positive yardage on designed run pays. Since my season was cut short last year, I hope to display more of this during the fall.

It’s unmatched. Beloit has a very deep football history, and it’s evident. Friday’s feel so much different than any other day of the week during football season in Beloit. Every game (home or away) there’s always tons of fans, and I speak for everyone that’s been through the program in terms of how much it’s appreciated by all the players and coaches.

We run a very modern-style offense, mixed with the same football concepts that have been run for decades. It’s quite fun to watch and keeps fans entertained. At these games, you’ll also notice the bond between the program and the community!

There are quite a few key players that we have returning this year. Carson Cox will have a huge year on both sides of the ball, playing RB and LB. It’s hard to find a more dedicated and hardworking kid than Carson. The same could be said about Vincent Palen, who will play WR and CB. Vincent is one that excels in anything he pursues. Grant Arasmith and Creighton Johnson are two that will also have a big year for us.

My favorite thing about football is the team aspect. You put in countless hours together on and off the field. it’s something that you typically don’t get in many other sports and easily creates a special relationship amongst the group.

I’m also involved in basketball and track and made it to state in both this past year. In basketball, I can play anywhere, 1-5 due to my size and length. In track, my events are: triple jump, 4x1, and the 4x4.

Playing for Coach Gober is a lot of fun. He’s a younger guy so I think that he does an excellent job relating to high school kids. He also does a great job communicating with us on the field during Friday nights.

We’ve worked all summer in the weight room and on the field. We’ve also been to a couple team camps to prepare us for the upcoming season.

I’ve seen mostly NAIA interest but also some D2 entering my senior year. Although I’m undecided on where I’ll be going to college, I plan to pursue a bachelor’s degree in chemistry or biology and later attend Medical school.

When I’m not playing sports, I love spending time with my friends and family. My younger brother is heading into his first year of contact football, so I’ve been trying to help him out as well!

In 10 years I hope to finally be settling down. I hope to be married, have a few kids, and a job that provides more than enough for my family. I also hope to raise my kids with God in their lives and to make that a staple of my family!

My favorite school subject is definitely history and is something I got from my dad. I’m a dedicated student in the classroom and at home. My GPA has never been lower than a 3.9 and my school work is something I take pride in.

I have two major role models in my life. My first one being my father. My dad has given up a huge portion of his hobbies and spare time to open a pharmacy for the betterment of our family. He is quick to help anyone and has always been there to pick me up throughout my life. Even with the overload of stress and lack of time that running a business creates, he never misses an opportunity to support his kids. Another role model that definitely can’t go unnoticed is my uncle, Logan. Throughout my entire life, Logan has been my best friend and has done everything in his power to help me succeed. He’d do anything for his family and the people closest to him, and that is something that anybody could admire. Through it all he’s been by my side, and it’s something that I’ll never be able to repay him for.

Plum Creek is definitely a favorite within the community!

This one isn’t so much about me, but I’ve been raised by one of the most decorated high school track athletes in the history of Kansas! Lindsay Eck!

No, but I would like to thank you again for your time and for the opportunity you’ve presented to kids across the entire state!