v Faces in KS: Shane Watts - Sports in Kansas 
Warning: include(../includes/bodytag.php): failed to open stream: No such file or directory in /home/kansass/public_html/ks/news/index.php on line 36

Shane Watts of De Soto is looking for a big year in Class 4A. 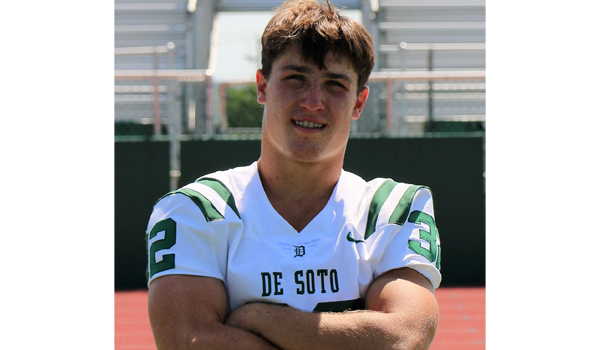 Like most boys in his family, De Soto’s Shane Watts has been playing football since a very young age. Being the son of a former college standout and younger brother of an All-State running back Watts has some very successful influences on the gridiron.

“My father, Derrick Watts - HoF Baker University Football ‘91, was my youth coach and my brother, Trevor Watts (All-State Running Back/Receiver ’17) who is a current Washburn University Football player have been major influences in my love for the game of football,” Watts stated. “I started flag football in Kindergarten & have been playing tackle football since 3rd grade.”

Shane has been making a name for himself lining up at strong safety and serving as a return man for the Wildcats. This fall he is set to become a three-year letterman and two-year starter for De Soto and head coach Brian King.

During his junior campaign in 2018 Watts recorded an impressive 68 tackles, three interceptions, and two forced fumbles.  Watts also saw some action on offense throughout the season and recorded a receiving touchdown as well.

As a result of his efforts, he recorded a bevy of accolades being named second-team all-league defensive back and an all-state non-senior honorable mention selection by Sports in Kansas.

Watts believes what makes him stand out as a player is his ability to make tackles in the open field.

“I’ve been told by many coaches that I’m one of the best open-field tacklers they’ve had go through the program,” he stated. “I have no fear & have a nose for the ball.”

Standing at 5-foot-9 and weighing 175 pounds Watts projects well at the next level at both defensive back and as a return man or as a slot receiver.

“As far as the next level goes, I’m concentrating most of my efforts on MIAA teams,” Watts stated. “I am not ruling out local NAIA teams either.”

Along with starring out the gridiron Watts also plays baseball in the spring and has lettered twice for the Wildcats as an outfielder.

In addition to athletics Watts also gets it done in the classroom as he holds a 3.6 GPA.

Watts and the Wildcats are looking forward to making strides this fall and building on last year’s 8-3 season that ended in sectionals.

De Soto returns a lot of experience from last fall’s team including six starters on offense and nine starters on defense. As a result, the Wildcats and Watts have high expectations heading into the 2019 season.

De Soto and Watts open the season on Friday, September 6th at 7:00 p.m. as they host the Leavenworth Pioneers.

This feature is presented by Easy Agent PRO, Your Digital Marketing Platform. Best of luck to the De Soto Wildcats in 2019!

My father, Derrick Watts - HoF Baker University Football ‘91, was my youth coach and my brother, Trevor Watts - All-State Running Back/Receiver ‘17 & current Washburn University Football player, have been major influences in my love for the game of football.  I started flag football in Kindergarten & have been playing tackle football since 3rd grade.

I’ve been told by many coaches that I’m one of the best open-field tacklers they’ve had go through the program.  I have no fear & have a nose for the ball.

The town of De Soto really gets behind our team.  It’s the best feeling I could ask for!  I live for Friday Night under the lights!

We have one of the best defenses in the state.  Most of us have played together since our youth football games.  We also have a talented, young, offense led by Jackson Miller, junior, at quarterback.

Brotherhood with my teammates, putting in hard work as a team and encouraging each other & getting rewarded for it.

I am a two-year letterman as an outfielder in baseball.

It is an honor to play for Coach King.  He is intense and does not accept anything but our best effort.

We had 8 weeks of weights this summer from 6:45am- 8am and practice afterwards.  We also played 7 on 7 on Monday nights and won Lansing’s tournament, beating cross-town rival Mill Valley.  - I was invited to multiple combines and camps in the area and really improved my game and started the collegiate recruiting process.

As far as the next level goes, I’m concentrating most of my efforts on MIAA teams, but am not ruling out local NAIA teams either.

I’m going to study kinesiology and possible run a gym to help others reach their fitness goals.

My father, Derrick Watts, because he taught me how lessons from the game of football can shape my life.  He’s always pushing me to be my best.

I used to play the trumpet.