v Behind the Scenes in Kansas: B.J. Harris - Sports in Kansas 
Warning: include(../includes/bodytag.php): failed to open stream: No such file or directory in /home/kansass/public_html/ks/news/index.php on line 36

Behind the Scenes in Kansas: B.J. Harris

B.J. Harris is the executive director of the Kansas Shrine Bowl. 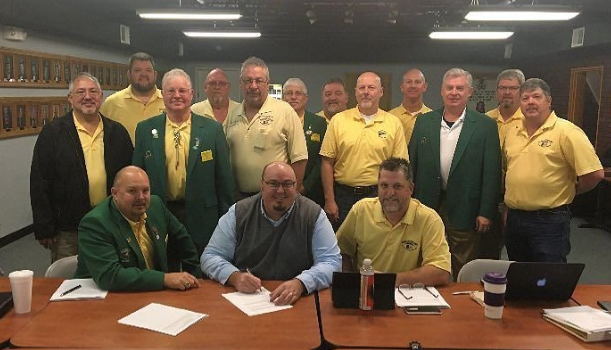 Working behind the scenes of Kansas’ largest annual celebration of the sport of football is B.J. Harris, the Executive Director of the Kansas Shrine Bowl.

Harris just finished up work on his second year on the job, where the 2019 Shrine Bowl was held in Dodge City. Harris’ next step as he prepares for the 2020 game at Washburn University in Topeka is getting the coaching staff in place.

“As we go through the rest of the summertime, there’s an overlap where we’re winding down the previous game and getting ready for the next game,” Harris said. “We’re figuring out where we wrapped up financially and reaching out to coaches who want to be head coaches for next year. Those are determined by the previous year’s coaching staffs.”

Harris also recently toured Washburn’s facility in preparation for next summer’s game, which will be held on July 18 at Yager Stadium.

“We went and toured their facilities to see where they’re at,” Harris said. “We got the process started as far as expectations for the facility — the rooms and meals and stuff. People don’t recognize that while our focus is football and the game, we have a band camp and a cheer camp. We have over 500 people that we’re responsible for feeding and we’ve started doing that for the 2020 game.”

As for choosing the athletes who will participate in the game, Harris and the rest of the Shrine Bowl staff keep an eye on standouts throughout the fall campaign.

“Obviously during the football season, we’re watching just like any other fan to see who’s standing out,” Harris said. “We want to see the best athletes from each classification. Our board of directors have no voice in that, it comes down to the media vote. Our coaches are determined by how they do in the season. So you want to look at your coaches and start to formulate what kind of offense and defense you’ll have. Then you start looking at the position players. When we send out our media ballot, it’s a full ballot with every player that their coaches nominated.”

Coaches are responsible for nominating players onto the Shrine Bowl ballot, which is then sent to media around the state for a vote. The media vote chooses the top 22 candidates for each side of the state, then the final 14 are coach selections.

Another major aspect of the celebration of the Shrine Bowl is the formal invitation ceremony that the Shriners put on for each player invited to participate. Members of the Shriners travel to each school and offer to present the player with their invitation, usually during halftime of a basketball game in the winter.

“It’s huge for our players. Every kid tries to take advantage of that opportunity,” Harris said. “Our Shriners work very hard to set that stuff up. It all starts once the rosters are released. The school districts love opening their doors for us. It’s a great honor for the kids and the community. It’s also important for us to get in front of people to further the mission of raising money for Shriners Hospital and kids. That’s an opportunity to spread our message. It’s a mutually beneficial event each time we go out.”

The last two Shrine Bowls have been held at opposite ends of the state. The 2018 game was held at Pittsburg State University on the east side of the state, while the 2019 game was held in Dodge City in the west.

“It’s certainly always great to get in front of a new audience. Dodge City had never hosted before and they did a good job,” Harris said. “They really rolled out the red carpet. Our fans are the parents and grandparents and cousins and teammates of the kids. There’s a core group of your fanbase where the game could be on the moon and they’ll show up to watch. They’ll go where their kids are at. That’s beneficial to us. That’s our core audience that will be the same no matter what. But we look for a city that supports football and wants to come out and watch a game. If we can find a community that just wants to come watch really good high school football, that’s where we can make a difference.”

A more central location, Topeka, has Harris excited for the prospects of attendance in 2020.

“It is a very well-located city for us,” Harris said. “It’s nice to not be that far from Wichita, which is one of our bigger fanbases. It’s also close to the Kansas City area which is a big pocket for us. So it’s well-suited geographically. When the game was in Topeka in 2013, it had over 7,000 people at it. We’re hopeful that’s the same case. When you have games in late July, it can be predicated on weather. But Washburn is a beautiful stadium with a great video board. It’s a big-time atmosphere.”

Harris previously worked in radio from 2005-11 before taking over as the executive director of the Crawford County Visitor’s Bureau in 2011. He served in that role before taking the Shrine Bowl job.

A 2000 graduate of Girard High School who got his communications degree from Pittsburg State in 2005, Harris counts himself lucky to find himself working for the Shrine Bowl. Harris, who starred on the defensive line for the late Craig Crespino at GHS, is also a Kansas Shrine Bowl alum, playing in the game in the year 2000. He's also a member of the Kansas Shrine Bowl Hall of Fame for his efforts and contributions to the organization as an alum and CVB director in partership with the game in Pittsburg in the past.

“I’m very fortunate to find a job that appears to be custom made for my skillset, my goals and my desires. I’m a football guy and sports-minded guy. I was always searching for something that will make a bigger difference. The fact that I can be involved in football and a charity event that helps kids is great. I’m charged with raising money from donors, and that’s something I enjoy doing. It’s humbling and slightly emotional to think about that this job exists, and I get to be the guy that does it.”

The Kansas Shrine Bowl has been a great partner to Sports in Kansas as the two work hand-in-hand in promoting the game year-round through multiple media platforms.

"The Kansas Shrine Bowl is a very special event and Sports in Kansas has aligned perfect with them as have some of our partners/advertisers. Our reach and audience fits perfectly to promote it, help them finalize selections, raise money for the hospitals through our combine event/live broadcasts/selection video etc. I've enjoyed our partnership with them over the last six or seven years working with the likes of Jack Call and Sarah VanPetten (the previous director). B.J. has stepped in nicely and done a great job with some great ideas. He knows all the current trends and where they are going. He is also a football guy all the way, but more importantly he knows how important this game is for what it really means because he played in it. So as repetitive as it sounds, it's so much more than a game. He also has seen it from the other side of being with a CVB so he knows how impactful this is for an economy boost for the cities that it comes to. It's hard to have a job that you can't wait to get up and go to work to every day, I am lucky to have one of those jobs as is B.J. It's crazy how some people end up with what they are doing as B.J. was a late addition to the game in 2000 and it changed his life. Had a kid not turned down the selection for one reason or the other, maybe he never works for the Shrine Bowl because he doesn't get that special experience that summer. Things definitely happen for a reason. I am looking forward to some great things with the Shrine Bowl in 2020." Sports in Kansas CEO/Founder, Chet Kuplen, said.

For more information on the 2020 game be sure to check out the Kansas Shrine Bowl website here.