v Faces in KS: Gabe Garber - Sports in Kansas 
Warning: include(../includes/bodytag.php): failed to open stream: No such file or directory in /home/kansass/public_html/ks/news/index.php on line 36 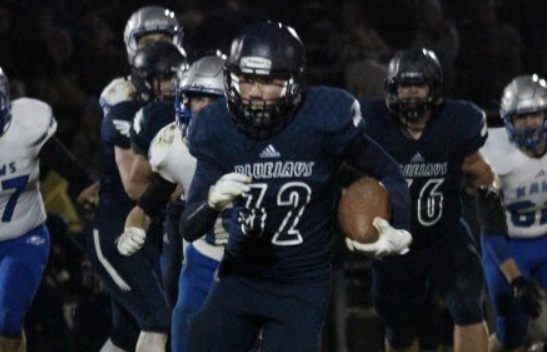 If you had to associate Gabe Garber with any word, then winning or athlete would be two that most people would find appropriate. Garber who is going into his senior year at Sabetha has won back-to-back state titles in both football and baseball for the Bluejays the previous two years.

On the gridiron he is a four-year starter and heading into his second season as Sabetha’s starting quarterback. On the defensive side of the ball Garber lines up at linebacker and safety.

During his career at quarterback he has passed for 1,196 yards with 14 touchdowns and only two interceptions while also rushing for 1,838 yards and 29 touchdowns. As a result of his quarterbacking efforts he earned all-league honors and honorable mention all-state honors during 2018.

Garber has been a standout for the Bluejays on defense where he has recorded 271 tackles throughout his career. Arguably his most important defensive play came in 2017 when he made the game-sealing interception to give Sabetha the 3A State Championship. At linebacker Garber is a two-time all-league selection and has garnered  all-state honors twice. He was a non-senior pick from Sports in Kansas last fall.

Standing at 5-foot-11 and weighing 180 pounds Garber is somewhat small for most players at his position however he makes up for that with his incredible vision and speed.

“I think a lot of it come from my vision of the field,” Garber stated. “This helps me run the way I do and pass the way I do. I may not be the biggest and strongest player, but I make up for it with everything else I have.”

On the diamond Garber is an outfielder for the Bluejays. As a sophomore he batted .522 and was named 3A player of the year from Sports in Kansas as a sophomore. This past spring, he picked up first-team all-state honors after batting .405. Sabetha has also won back-to-back in baseball in Class 3A.

When he is not directing the offense on the football field or roaming the outfield Garber is running the show at point guard for Sabetha.

When it comes to the next level Garber is looking to continue playing both baseball and football.

Few colleges have contacted me so far,” he said. “But looking to play football or baseball in college somewhere.”

As for now though Garber still has a full plate on the table for all three sports during the 2019-2020 school year.

Him and his teammates are looking to duplicate their prior successes on the gridiron this fall.

“I think we always have a shot to make a run just like the past two years,” he stated.  “If we all play together I think we will end up making a run for it.”

If things go according to plan this fall Garber and the Blue Jays could join Rossville and Conway Springs as one of the few schools in 3A to win at least three consecutive state titles.

Sabetha opens their season on Friday, September 6th as they travel to Nemaha Central.

Chet Kuplen, CEO/Founder of Sports in Kansas, on Garber and Sabetha

"First off, he's a good kid that I've had the chance to meet and talk to at a few of our combine events the last couple of years. The kid knows how to win, there's no questioning that. I don't know where he fits in at the next level of football but if he decides to play football he's going to help someone out on either side of the football. Certainly his size can hurt where you project him but he always seems to come out of the pile or come up with the tackle and you just can't teach that. Baseball wise I would imagine he will have a lot of opportunities. He led the state of Kansas in legion ball in average this summer. From everyone I've talked to he is a very humble young man with good character. It's really exciting what has been going on in Sabetha the last couple of years. And it's not just Gabe either, there have been a lot of other kids. They'll have a lot to replace this year including studs like Elliott Strahm, Cauy Rokey and Joseph Gruber but they've had some kids waiting for the opportunity as well. Coach Michael and Coach Frey have done outstanding work with baseball and football. On another note, you need to check out the baseball field there. What the Keim family has done there is incredible with that and I was lucky enough to tour that last summer. We have had great support at Sports in Kansas on the community of Sabetha, it's a special place with a lot of special people. 3A is one of the most competitive classes in the state and to go back to back on baseball and football almost sounds made up!"

This feature is presented by Keim TS Trucking. Proud to support the Sabetha Bluejays

Also special thanks to Rainbow Communications for their updates of the Bluejays and Northeast Kansas sports coverage w/ Sports in Kansas.

I’ve played football all my life and I guess it started like mostly everyone else. In third grade tackle football started and I didn’t play too much but by the time 4th grade rolled around I was I ready I wanted the ball every play, that was my mentality, that’s how I started football.

I think we always have a shot to make a run just like the past two years. If we all play together I think we will end up making a run for it.

I think a lot of it come from my vision of the field. This helps me run the way I do and pass the way I do. I may not be the biggest and strongest player but I make up for it with everything else I have.

Sabetha is an Amazing place to be all year round the people are so friendly and encouraging. Friday nights I can always count on the fans to come out and support. Would 100% not want to play at any other school.

Well if you watch sabetha you will not be let down, the physicality of this team is one of the best in Kansas. You will watch a team that is mostly ground and pound but will pass if they need to as well.

Everyone who is on the field on Friday nights will be a key player.

How it’s so physical and how it’s such a team sport that brings everyone together.

What is it like to play for Coach Michael?

Unlike any other coach in the state he’s the best of the best and he cares about you on and off the field making you a better man for the future. Uses the saying 1. Faith 2. Family 3.Football.

We work super hard in the summer. Nobody in the state does what we do guaranteed.

Few colleges have contacted me so far. But looking to play football or baseball in college somewhere.

Playing video games and hanging out with friends.

Hopefully I’m still playing sports, but if not I hope I will be working in the sports medicine field.

Favorite subject is science and I have a 3.5 GPA

My parents are my role models they have taught me everything.

In my town my favorite place is downtown coffee company.

I play quite a bit of golf. Or my family is full of people in the military. My brother and dad are both rangers and my second brother just joined the army this year.