v Looking back 25 years in Kansas High School Football - Sports in Kansas 
Warning: include(../includes/bodytag.php): failed to open stream: No such file or directory in /home/kansass/public_html/ks/news/index.php on line 36 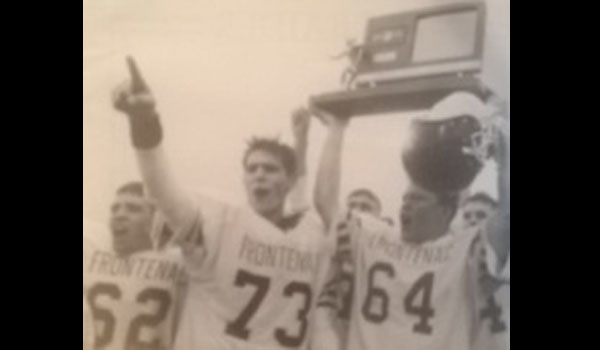 Seven state champions were crowned across Kansas on Saturday November 19, 1994.

Head Coach Tom Young, who retired at McPherson a few years back, became the first coach to win a state title at three different schools (Hanover, Wellington) as the Panthers shut out Lawrence to earn their first state football title in school history. Lawrence had won five consecutive titles in 6A from 1989-1993. Derby finished the season at a perfect 12-0. Tyson Malik led Derby with 1,316 rushing yards and 23 TDs on the season, earning all-state honors. 19 years later, the 2013 Derby squad and now head coach, Brandon Clark, would capture their second state football title in school history and have added several more since.

Liberal marched to its third state football title in school history with a 40-0 romp over Salina Central, ending the Mustangs 19-game win streak. The Redskins, led by head coach Gary Cornelson, led 34-0 at the half. Led by all-state quarterback Lamar Chapman, who would go on to Kansas State and the NFL, the Redskins had more than 400 yards in total offense in the title game.  Chapman combined with junior all-state running back, Montoya Alsup, to rush for over 2,300 yards on the season.

Paola rolled up over 400 yards of total offense over a loaded Scott City squad to capture the 4A state title with a perfect 13-0 record. Paola, coached by Jim Lee, steam rolled opponents in the 4A postseason by outscoring them 158-to-45 over the span of four games. The Panthers were led by Kansas legend, Brian Shay, over the 1994 season, who would go on to capture the 1998 Harlon Hill Trophy at Emporia State as the nation’s best player in NCAA Division II . Shay, who was 5-foot-9 and 185 pounds, rushed for 1,786 yards and 27 touchdowns on the season, picking up 215 of them in the state title game. Shay also doubled as a state wrestling champ and finished ranked third in the state in tackles at his linebacker position. Paola also featured all-state lineman, Brad Elmore, a 6-foot-4 and nearly 300 pound road grader. All-State basketball player, Cam Lindsey, also rushed for over 1,000 yards (19 TDs) in the Panthers backfield that season. Many consider this 1994 Paola squad one of the best 4A teams in Kansas history.

Marion only lost twice in 1994 and both losses coming to the hands of Wichita Collegiate. The Spartans, coached by Mike Gehrer, took state runner-up the year before to Riverton, but finally captured the 3A crown. Collegiate was led by junior DeAngelo Evans with 217 rushing yards in the state title game. Evans, perhaps the best high school football player in the history of Kansas, finished his junior season with 2,689 yards and 37 touchdowns in leading the Spartans to a 12-1 record. He would finish his high school career with 8,473 rushing yards and 131 touchdowns, both state records. Evans, who battled many college injuries, would go on to play at Nebraska and Emporia State. He rushed for 776 yards and 14 touchdowns as a true freshman for Nebraska. Collegiate also featured all-state sophomore, Harrison Hill, who had 781 yards receiving and picked off seven passes from his defensive back position. Hill would later go on to play at the University of Kansas.

The best game of the 1994 season came in the 2-1A defensive battle of Frontenac and Stockton. Stockton would take a 6-0 lead in the third quarter, when their all-state running back/linebacker, Andy Pfannenstiel, scored from five yards out.  Frontenac scored twice in the fourth quarter to take a 13-6 lead with less than four minutes remaining in the game. All-State tight end Stephen Hipfl was the first of those two scores as he caught a 50-yard TD from quarterback Kaleb Terlip to give the Raiders a 7-6 lead with a little under eight minutes remaining. The second score, a few minutes later, all-state running back Tildon Burns, the 2-1A player of the year with over 1,800 yards rushing , would score from 67 yards out to give the Raiders a 13-6 lead with 3:42 remaining. Junior Israel Jirak of Stockton, who would be player of the year in 2-1A the following season, scored on a 14-yard pass from Rich Bouchey with 1:25 reamaining in the game to cut the lead to 13-12.  The Tigers elected to go for the two point conversion and the win, but  Pfannenstiel came up short of the goal line to give Frontenac and head coach Leon Miller it’s first ever state football title. The Raiders, now a 3A/4A-II school the last few years, finished a perfect 13-0 on the season.

Coldwater, led by head coach Carlos Amaros, would finish the season 13-0 with a 26-7 win over Bennington in the 8-Man I state championship game. The Eagles were led by juniors, Cortlee Haynes and Buster Kuhn in the title game. Kuhn and Hayes combined for nearly 200 yards rushing and three touchdowns in the title game. Kuhn, an 8-man all state selection in 1994, rushed for 1,608 yards and 27 touchdowns on the season.

Kensington had the best team in 8-M II in 1994 and may have had the best mascot as well, the Goldbugs. The Goldbugs would win 10 of their 13 games by 45-point rule over the 1994 season, including a 52-6 rout of Baileyville B&B in the title game. Spencer Levin, an all-state running back and linebacker, finished his career as one of the best 8-man players of all-time, including a state record 113 rushing TD’s. The record is now held by Thunder Ridge’s (Kensington) Joel Struckhoff at 127 TD’s, set in 2013. Struckhoff is also the head coach at Thunder Ridge. Levin also captured four state discus titles in track and field.

Chapman, a high school quarterback, was one of the best athletes from the 1994 season.  Rushing for over 1,000 yards as a quarterback he helped the Redskins to the 5A state title. Chapman would go on to be an All Big 12 defensive back at Kansas State and was selected in the fifth round of the 2000 NFL Draft by the Cleveland Browns, where he spent two seasons.

Perhaps the best athlete of the 1994 football season, would be Mondriel Fulcher of Coffeyville Field Kindley High School. Fulcher, then one of the nation’s top recruits, would earn all-state honors at quarterback. The 6-foot-5 205 pound senior also earned all-state honors in basketball. He continued his playing career at the University of Miami-FL, where he was a starting tight end for the Hurricanes. Fulcher was drafted in the seventh round of the 2000 NFL Draft by the Raiders, where he spent three seasons.

Goolsby, who would go on to play for Bill Snyder and the Kansas State Wildcats at the fullback position, had a great senior year for Dodge City as he rushed for over 1,500 yards and 25 touchdowns. Goolsby was also one of the best linebackers in Kansas. He went on to play five seasons in Arena football. His son, DeAndre, an all-state selection in 2013 from Derby, is now a freshman at the University of Florida.

He might have one of the best names in Kansas high school football history and he’s also one of the best players. Keck, not highly recruited out of Goodland as a running back and defensive back, was a two-time state triple jump champion in high school.  Keck, who started his career at Hutchinson Community College, would later earn a scholarship at Cincinnati. He went on to be one of the best kick returners in the country for the Bearcats. He would later have brief stints in the NFL with the Giants and the now defunct XFL.  Keck, a fitness trainer and actor, has also had several appearances on reality shows and is an endorser for fitness equipment.

Perez may have not been as well known in high school, but ended up in the NFL with the Kansas City Chiefs after playing at Murray State. Perez had 33 receptions for 753 yards for the Stags over his senior year, leading them to a 5A sub-state runner-up finish.

Peterson, a 6-foot-2 230 pound senior, earned all-state honors at his defensive line position. Peterson, who obviously got bigger, would go on to be one of the best players in Pitt State football history. He earned two All-American honors at PSU, with 29 quarterback sacks in his career. He had a brief stint in the NFL with the Cincinnati Bengals as a linebacker.

Shay would rush for 1,786 yards and 26 touchdowns in the 1994 season. Shay, a state wrestling champion, also doubled as an all-state linebacker. He would go on to win the Harlon Hill Trophy, at Emporia State, as the nation’s top player in NCAA Division II.

Simoneau, who is one of the best K-State football players of all-time, was equally as impressive in high school. As a senior, he rushed for 2,252 yards and 21 touchdowns for the Redmen. He went on to spend 11 seasons in the NFL as a linebacker and was elected to the College Football Hall of Fame in 2012.

State Leaders by the Numbers in 1994…

Stats courtesty of the Kansas Sports Hall of Fame