v Faces in KS: Dominik Stadlman - Sports in Kansas 
Warning: include(../includes/bodytag.php): failed to open stream: No such file or directory in /home/kansass/public_html/ks/news/index.php on line 36

Dominik Stadlman is one of the best specialty players in the state. 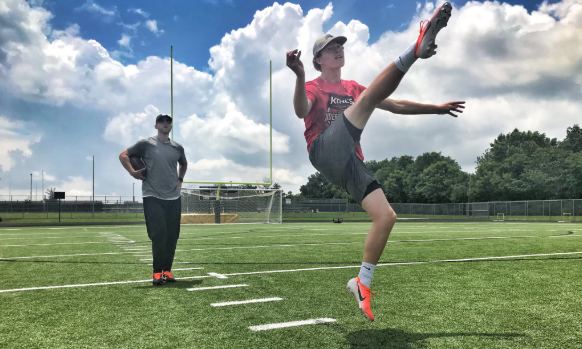 Mike Scifres is one of the National Football League’s all-time great punters. A fifth round pick out of Western Illinois in 2003, Scifres punted for the San Diego Chargers from ’03-15. He earned recognition as the top punter in San Diego annals on the Chargers’ 50th anniversary team.

Mike is married to Stacie. The couple has four children and currently lives in Leawood, Kan., in the K.C. area. Scifres is the step-uncle to Blue Valley Southwest senior kicker/punter Dominik Stadlman, one of the nation’s best punters. The two first met with Stadlman was seven, and Scifres has helped him ever since.

“He is a big role model in my life,” Stadlman said.

Scifres lived in Kansas City during the offseason when Stadlman was in the sixth and seventh grade. Scifres then moved to San Diego and came back to Kansas City this year. Stadlman said Scifres, even though the injuries, “kicked an amazing ball.”

On June 17, Stadlman posted photos to his Twitter account of him kicking with Scifres. Stadlman posted “Working with the #GOAT! So fortunate to call this guy #Family! @MikeScifres thank you for being my inspiration growing up and now a mentor! #Blessed”

“He’s just a great guy,” Stadlman said. “He’s a big leader, and he is probably the most consistent punter I’ve ever seen in the NFL.”

Scifres’ tutelage has helped Stadlman rank among the state’s top specialists for kicking and punting. He practices daily and has a long-term goal to play professionally like Scifres.

“Hopefully get drafted or go as a free agent and hopefully get a tryout with a pro team, but if not, I am going to stay in school, get a business degree,” he said.

Stadlman has long worked with Kohl’s Kicking Camps, an industry leader for kicking/punting, and is ranked as the nation’s No. 70 punter by Kohls. The 6-foot-3, 175-pound Stadlman has a 3.5 star kicker rating and a 4.5 star punter rating.

“The way that I am lengthy is just a better build for punting, and the way I punt,” Stadlman said.

According to KohlsKicking.com, Stadlman has attended multiple camps, including the Kohl’s National Scholarship Camp. Kohl’s noted that Stadlman “showed great improvement with his punting” with multiple 50-plus yard punts.

“Kohl’s has made me into a more precise kicker, more consistent,” Stadlman said. “Helped me with my form, better contact, especially on those windier days kicking into the wind, where to hit the ball so that my ball flies straight and doesn’t get pushed around with the wind.”

He has earned a priority walk-on offer from Nebraska, and expects to punt in college. Stadlman is also a solid baseball player.

“Baseball has helped me a ton just with my hands with punting and getting that drop out quickly, which is what colleges want off that snap,” Stadlman said. “They want you to get the ball out and off your foot as quick as possible.”

In his career, Stadlman has converted 11 of 13 field goals and 45 of 51 extra point attempts.

“Any time that I kick I am always worrying the next kick, I am not worrying about that kick,” Stadlman said. “That’s just that mindset that I have, and Jamie Kohl, who runs Kohl’s Kicking, gives us all that mindset, and I think that’s what helps me make every kick.”

Last season, his first as the main punter, Stadlman delivered 39 punts for a 32.9 average and six inside the opponents’ 20-yard line. He had a season-best 64-yard punt with 4.19 hang time in a Week 3 contest versus Blue Valley. He was No. 12 in total punting yards in Kansas with 1,282, according to MaxPreps statistical lists.

Stadlman was tied for fifth in the Sunflower State for field goals and second in field goal percentage (min. four kicks). The only kicker better in percentage was Phillipsburg’s Jon Hunnacutt, the state’s all-time kick scoring leader and a Fort Hays commit.

On the 53-yarder, BVSW moved the ball down the field, and then the Timberwolves’ quarterback took a sack. On fourth down, head coach Anthony Orrick and special teams coordinator Dustin Barnes asked Stadlman if he could make the kick. It was a windier day, and Stadlman said yes.

“A crucial time for us to score, and just put it through the uprights,” Stadlman said.

BVSW has struggled in the Eastern Kansas League, the state’s best conference, and finished 3-6 in Class 5A last year. Stadlman scored all of his team’s points in two games, the Blue Valley North contest and a 10-9 loss to Shawnee Heights to end the year when Stadlman made three field goals.

This season, Stadlman would like the Timberwolves to post a winning record. The school’s last winning mark was a 5-4 mark in ’12, and the school record for wins is a 6-6 mark in ’11. This is the tenth year the school has had a football team.

At Nebraska, Stadlman attended the special teams camp. Stadlman was told by Kohl’s to not expect any offers.

“Because punters and kickers really aren’t the priority at the beginning of the summer, just because they need to get their top recruits in first, and get them offered,” Stadlman said.

“Had a good day at camp, I punted some really good balls,” Stadlman said.

At the end of camp, Crespo asked Stadlman to stay after for a bit, and NU offered him a priority walk-on. Nebraska has historically not had many players from Kansas. However, second-year coach Scott Frost, a former standout Cornhusker quarterback, has two top Kansas 2020 commitments, Lawrence Free State offensive lineman Turner Corcoran and Derby offensive lineman Alex Conn.

According to dataomaha.com, Mike Stigge, from Washington, is the only punter from Kansas to appear on a Cornhusker roster. He walked-on, started all four years and is in the Nebraska Hall of Fame. Stadlman was “super shocked” by the offer, and plans to talk more with the Cornhuskers once the season starts.

“It was totally a blessing to get that offer,” Stadlman said.

How did you start your career?

“Our team, I am just expecting us to go over .500 this year, we haven’t had a season over .500 in about five or six years, so that’s our team mindset to get into the playoffs.”

“My favorite subject right now it was zoology this past semester. I enjoyed the teacher, and just the stuff that we learned about.”

“Hopefully get drafted or go as a free agent and hopefully get a tryout with a pro team, but if not, I am going to stay in school, get a business degree.”

“My favorite place to eat is Chipotle. I always get a burrito.”