v Faces in KS: Taylor Braet - Sports in Kansas 
Warning: include(../includes/bodytag.php): failed to open stream: No such file or directory in /home/kansass/public_html/ks/news/index.php on line 36

Taylor Braet has become one of the most well known faces in Kansas. 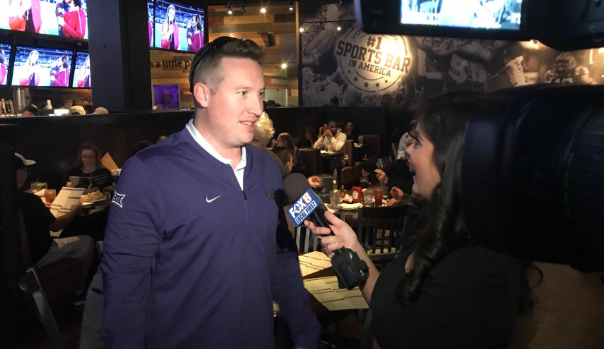 As the Kansas State Wildcats football team enters a new era under new head coach Chris Klieman, one of the most notable faces to emerge has been that of Taylor Braet, the Director of Recruiting.

A native of Wichita, Braet’s enthusiasm has been brought to the forefront with Klieman’s access to the program. Braet, who is entering his 14th season on staff at K-State and seventh in his current role, starred in a holiday-themed video posted by the athletic department while his impressive collection of purple shoes was the subject of a Wichita Eagle profile.

Braet, who graduated from Wichita Heights High School in 2003, has embraced being a new public face of the Wildcats.

“I take it with excitement and high energy,” Braet said. “It’s all about smiling and wanting to go to work. You’re selling the greatest school and a great brand. It’s exciting every day.”

Braet was one of the holdovers from Bill Snyder’s staff. Prior to starting his coaching career as a student-assistant at K-State in 2006, he was a student-assistant under his father, Steve Braet, at Butler Community College. Butler won three Kansas Jayhawk Conference titles and one national title during his three seasons there. Steve is a Butler legend, entering his 40th season as an assistant coach, that is one of the most respected coaching figures in Kansas.

Klieman has tasked Braet with employing an aggressive approach to the recruiting trail, an approach that is already paying dividends.

According to 247sports, K-State’s 2020 class ranks No. 42 nationally while its 18 commitments are tied for the second-most in the Big 12.

“It’s going to be tremendous to get more eyes on kids and get things done that we need to get done,” Braet said. “Hopefully we get a staff full of guys like me that believe in the system and all want the same thing. We’re trying to keep up with the Joneses and you have to have the right people in the right place.”

Part of Braet’s recruiting plan is to be the top choice for in-state, Kansas recruits.

“Kansas, to me, is my most important area,” Braet said. “You’ve got to secure home first. You’ve got have the kids like Jordy Nelson, Cody Whitehair. They want to represent their state well. They want to show that they’re the same caliber as kids in Texas.”

K-State’s battle for in-state recruits with Sunflower Showdown rival Kansas has come to the limelight as well as both programs feature new head coaching staffs.

While the Wildcats’ recruiting efforts have picked up under Klieman, so have Les Miles’ with the Jayhawks.

Braet’s advice to in-state recruits hoping to get an offer from the Wildcats? Make yourself visible to recruiters.

“You’re looking to see how the tape looks,” Braet said. “You’ve got to see the competition they play against. If you’re an in-state kid, you’ve got to get seen at camps. We also want to see how coachable you are. You’re always looking for a factor that makes a kid stand out.”

How the Wildcats will fare in the first year of Klieman will be tale told this fall. But there’s no question that Braet is helming a recruiting office that is reinvigorated to hit the ground running.

“We want to have a staff that cares, is driven, has high energy and passion. You can’t put a win or loss number on anything. We want guys on the field and on the staff that want to be in our program,” Braet said.

And nobody will ever question Braet’s undeniable passion for his home state.

“It’s my job to know the entire state. It’s one thing to take pride in where you’re from. My wife always wants me to take a vacation. But why would I leave the greatest place on earth?”

“The guy is the most active guy I have met in wanting to know who Kansas high school football players are since I’ve been doing this over the last eight football seasons. He gets to know you and stays in touch all the time whether that’s football related or non-football related. I thought I worked a lot of hours until I met Taylor, I don’t think the guy sleeps. Our high school football players in Kansas are lucky they have him, because he will check anyone out, whether they are from 8-man or 6A. If you don’t know Taylor or his dad, Steve, then you may not be very connected in football across Kansas because they know everyone. He has his dream job and he is shining doing it.” Kuplen said.