v Faces in KS: Calvin Stapp - Sports in Kansas 
Warning: include(../includes/bodytag.php): failed to open stream: No such file or directory in /home/kansass/public_html/ks/news/index.php on line 36

Stapp is looking for a huge season for the Eagles. (photo: Carrie Towns Photography) 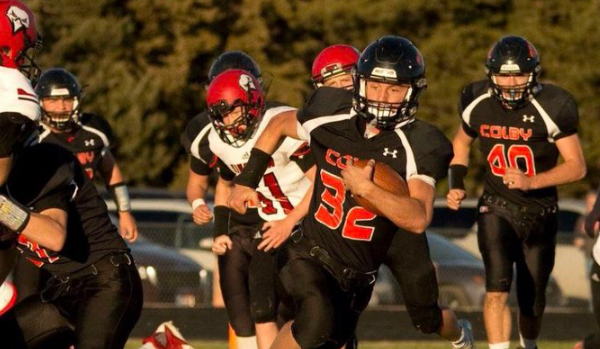 Colby started 4-0 in 2018, the second consecutive year the Eagles had captured its initial four contests.

At that point, then-junior running back Calvin Stapp recorded 380 rushing yards and seven scores, along with a game-winning receiving touchdown versus Holcomb, which ended a nine-game losing streak for the Eagles in the series.

Stapp started at outside linebacker and recorded three interceptions. Plus, Stapp was key on all special teams units.

“You can’t replace him,” Colby coach Rees McKinney said entering Week 5 last year. “He is on the field every play. He plays every special teams play. You’ve got to kick to him, you’ve got to punt to him. He is one of my gunners on kickoff. He is my gunner on punts. He is definitely one of the best players. Whether he gets recognized by the state or not, he is one of the best players in the state.”

By year’s end, Stapp helped Colby to its best start since ’90 and an eventual 8-2 record.  The Eagles were undefeated at home and lost only at Scott City and Andale, teams that both finished the season ranked in the top-four in the final KPreps Class 3A poll.

“Last year everyone was saying how Colby football was fun to watch again, and then the stands started getting packed, starting getting louder,” Stapp said.

Helped by Cross Fit, Stapp’s valuable versatility yielded 968 rushing yards and 17 rushing scores, both team-highs. He also paced the squad with 20 catches for 293 yards and tied for first with three receiving touchdowns.

“Oh yeah, I would not like to be on the sidelines,” Stapp said. “I would rather play than just watch. I feel like I can make an impact.”

Stapp was third on the squad with 29 tackles and picked off four passes, second-best to Schippers’ five. He returned a punt for a score and tallied 1,525 all-purpose yards. For college, Stapp believes he “could play anywhere,” including returner, running back and slot receiver.

In the Great West Activities Conference, a league where the top-five teams went 16-9 in non-conference play, Stapp earned rare recognition in all three phases.

As a sophomore, he delivered 750 rushing and 492 receiving yards with eight offensive scores.

“If we are up by a few touchdowns, I might not go on kickoff, but other than that, I am up there every play,” Stapp said. “I love catching punts and kickoffs. I don’t know, a lot of people don’t like to, but I think it is pretty fun, and it’s cool when your teammates come to blindside block. I would say it is the most fun running.”

Stapp’s talent comes in part to his parents, Monty and Heather Stapp. Monty works at Farm Bureau, and Heather is a middle school special education teacher.

They have owned the Cross Fit gym in Colby for the last seven years and are active with the sport online, especially crossfitcolby.com. They have several Cross Fit certifications, including Level 1, Olympic Lifting and Mobility.

They have been Cross Fit members since Jan. 15, 2010 when they lived in Garden City. Monty’s brother, Trevor, played wide receiver at Fort Hays and is the Holcomb assistant boys’ basketball coach.

“I don’t have an excuse not to wake up early,” Stapp said. “They just keep me in check. They work hard.”

The day after state track, Heather went to the Granite Games, a big Cross Fit competition. Stapp’s sister, Nicolette, is one year older and has been heavily involved in cross fit. In ’15, she was ranked No. 248 in the world in the 14-15 girls age group.

“Everyone’s friendly there,” Stapp said of the Cross Fit gym. “No one is judgmental. You all work out together, and it’s just a fun environment to be in. I really think it’s helped my stamina especially, running all the time, and I think it has helped with my agility, too, just kind of being flexible.”

The Eagles had multiple decorated players on last year’s squad, including quarterback/defensive back Jordan Schippers, a Western Illinois signing and KPreps first team all-state player, along with Xavier Slaven, who signed with Fort Hays football.

“I look up to Jordan a lot,” Stapp said. “We are pretty close friends. Just the way he acts, the way he handles himself, he is not like cocky or anything. He just goes out there and plays football. He is always in the weight room or working hard there longer than everybody else, things like that.”

Eagles back this fall includes 6-7, 285-pound lineman Aaron Kurth. He has picked up multiple big-time offers, including South Dakota, Western Illinois and Kansas. Kurth took third in the 3A shot put this spring. Junior Hagan Booi is a returning state runner-up in wrestling.

“He’s tough to move,” Stapp said.  “Yeah, I am just looking forward to see what he can do. He is more motivated than he was in the past now that he has seen all this interest, he is kind of like, ‘Oh ok, I can do something special.’ State track helped him boost him confidence, too, which will help him a lot.”

This feature is presented by George Tubbs and Sons Ford Sales in Colby, Kansas. Best of luck to the Eagles this season! Visit our website here!

What was it like last year to be a big part of one of the best seasons in Colby history?

“We knew that we were going to be good. Because our senior class had played for years, and they had been working for it. It was just a good time. Felt like everything was put together finally.”

Your family has a lot of connections to Holcomb, another team in your league. What was it like to comeback and beat the Longhorns, 38-34, last season? Colby ended a nine-game losing streak versus Holcomb.

“That was one that we had been wanting to win for awhile, just because Holcomb was so good in the past, and we had never beat them, and to beat them in such a close game like that, it was really fun. Really brought us together.”

Colby had a lot of players change positions last season, notably all-state running back Jordan Schippers from running back to quarterback. What did that say about your team?

“That just showed how much of a brotherhood we had. We had people playing wide receiver, they wanted to get the ball all the time, but they went out there and made key blocks for us, and then we had Jordan moving to quarterback, which was probably tough for him being a running back.”

As a sophomore, you stepped up a lot in mid-season. (Colby had a lot of injuries at the time.) What changed?

“We didn’t have anyone else to go to. I just stepped up, just started getting the ball more, and been like that ever since.”

You play multiple positions. Where do you see yourself in college?

“Last year everyone was saying how Colby football was fun to watch again, and then the stands started getting packed, starting getting louder.”

What do you enjoy most about school and what kind of student are you?

“I see myself doing something with math probably, I don’t know what it would be. I have not looked into it too much. If not math, I would say sports medicine, I am not sure.” Favorite subject is math, GPA is 3.85.

“I would say my parents, because they taught me how to act.”

What is the best place to eat in your town?

“Definitely El Dos. I think that’s where everybody likes to eat.”