v Faces in KS: Quinn Buessing - Sports in Kansas 
Warning: include(../includes/bodytag.php): failed to open stream: No such file or directory in /home/kansass/public_html/ks/news/index.php on line 36

Quinn Buessing is looking for a huge year in 2019. (photo: Amy Smith) 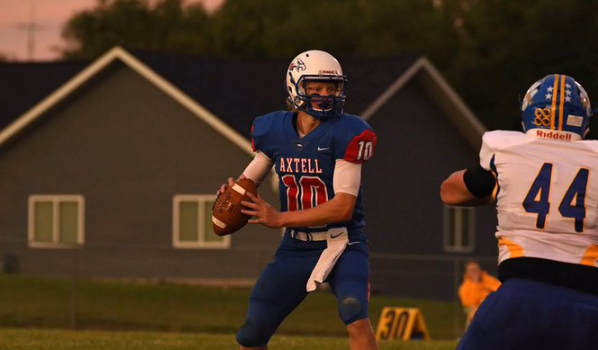 Axtell’s Quinn Buessing is one of the state’s most accomplished athletes for the Class of 2020.  Buessing has earned all-state recognition in four sports, and has the opportunity to win multiple state championships this fall alone.

He has started since he was a freshman for Axtell at quarterback and is a standout cross country and track runner.

Last fall, Buessing was a Sports in Kansas finalist for Eight-Man, Division II Offensive Player of the Year after he completed 185 of 261 passes for 2,595 yards with a 51/3 TD/INT ratio. He rushed for 689 yards and 13 scores.

Axtell finished 10-2 and sub-state runner-up. Both of the Eagles’ losses came to Hanover, the three-time undefeated state champions. Axtell finished second in eight-man scoring offense at 56.8 points per game. The Eagles ranked third in the final KPreps poll behind Hanover and Osborne.

“Not being one-dimensional,” Buessing said of his strengths. “I can avoid the rush, throw on the run, pick defenses apart while in the pocket, and if I have to, scramble for a first down.”

Defensively, Buessing has delivered 193 tackles. He has received an offer from NAIA Bethel College.

Buessing could break the eight-man state records for career passing yards of 8,320 set by White City’s Michael Hammersmith from ’97-00, career touchdown passes of 143 set from Central Burden’s Bo Savage from ’08-11, and career completions of 599 set by Kensington’s Kirby Rust from ’86-89.

In basketball, Buessing collected Class 1A honorable mention all-state by the Kansas Basketball Coaches Association as a shooting guard in the winter.

For cross country, Buessing has finished 11th and fourth at the state meet the last two seasons. Axtell has a pair of top-six cross country team showings in that span.

At the state track meet in May, Buessing enjoyed a second place finish in the 3,200 and three other top-nine placings in the distance events.

Buessing also plays summer legion baseball where he pitches and plays centerfield. He is part of a major family dairy farm in Axtell.

“I am almost constantly doing something active, whether it’s working on our family dairy farm, working out, being with my family, or hanging out with the boys,” Buessing said. “We always have a pick-up basketball game, batting practice, game of golf or bowling to do.”

“She goes head over heels for me, and I would not be where I am today without her, or my family pushing me every day,” Buessing said.

Quinn’s older brother Colton had previously played quarterback for Axtell. In ‘15, Colton paced Axtell to a 10-2 record and sub-state title game showing where the Eagles lost to Argonia-Attica.

Quinn and Koch battled for the quarterback position in ’16. Koch eventually moved to receiver, and Quinn took over as signal caller. Axtell went 4-5 and 6-4 before the big jump last year. Axtell’s four-win improvement tied for third in the eight-man ranks in ‘18.

The plus-15.03 offensive improvement over ’17 was the sixth-biggest in eight-man. As well, the Eagles allowed just 20.5 points, the No. 16 in defense in the eight-man ranks. Axtell was 17.5 points per contest better defensively than ’17, which ranked seventh in eight man.

Helped by Buessing’s four interceptions, Axtell forced 26 turnovers and was plus-15 in turnover margin.

“We will put on a show,” Buessing said of an Axtell game. “Also, we play 8-man, which is a much faster pace than 11-man, so there is lots of action.  We also have a great offensive and defensive scheme.”

Even with Koch graduating, Axtell should still be on the short list of leading contenders, and will likely be preseason No. 2 behind Hanover in Eight-Man, Division II.

Last year, Axtell lost 50-42 at home to Hanover in Week 6 in a Twin Valley League and district

contest. Axtell led at halftime. In the state semifinals, Hanover won 60-14, though Axtell moved the ball well. The Wildcats outgained the Eagles by just 10 yards.

All but eight of the team’s rushing yards came from non-seniors, along with 62 percent of the receptions. Axtell brings back key pass catchers Derek Buessing, J.J. Hart and George Volle.

All of the Eagles’ sacks and five of the top-seven tacklers were by non-seniors. Overall, five starters are back on both sides for coach Eric Detweiler, a ’98 Axtell graduate. Axtell will have just 16 players.

“Without everyone there, we would not be able to do a scout team, which is really beneficial for us,” Buessing said.

Axtell has dropped 13 in a row to Hanover dating back to 2005. However, the Wildcats took massive graduation losses, notably classification Defensive Player of the Year Carter Bruna. Hanover’s top eight of 10 tacklers were seniors, as well as 90 percent of its receptions, and 74 percent of its rushing yards.

Buessing labeled ’19 “as good as shot as we’ve ever had.”

“To lead my team on a deep run in the post season once again,” Buessing said of his goals. “I also want to be the best teammate, and friend I can be while accomplishing that goal.

Axtell won a title in ’93 and was second in ’85. The Eagles are 0-7 in sub-state title games since ’97, including three times in the last five years.

“Hanover is really, they are the powerhouse for eight-man,” Buessing said. “And we have always been there in football, too, just really close, and so I feel like we had our chance to beat them last year, and we will be ready again this year.”

"First off this is a great kid with a 4.0 GPA besides any of the athletic accomplishments. He could go down as one of the best 8-man quarterbacks of all-time by his numbers when its all said and done. How many kids do you know that do cross country at a state championship caliber level and football at the same caliber level, I dont know any. Sure its small classes but who cares, its incredible! He is a four-sport all-state athlete and that is just hard to come by, he also plays legion ball in the summer.. I also think his team has a shot to be very good and one of those top teams in the mix at the end of the year. Of course Hanover loses some key pieces, but Hanover is Hanover. Hunter Koch, who had an unreal season last year and great connection w/ Buessing, is gone but they'll have someone step up."

This feature is presented by Buessing Dairy and Axtell High School Football, proud to support Quinn Buessing and Axtell Athletics.

I started playing tackle football in the fourth grade, and played running back. In one game, I stepped on a lineman’s leg and broke his femur.

To lead my team on a deep run in the post season once again. I also want to be the best teammate, and friend I can be while accomplishing that goal.

Yes, we do. Even with a loaded district, like ours has always been, I feel like we have the right guys to make it happen.

Not being one-dimensional. I can avoid the rush, throw on the run, pick defenses apart while in the pocket, and if I have to, scramble for a first down.

It is great. With the combination of our color commentator, loud music, and involved crowd, Axtell Sporting Complex is the place to be on Friday nights.

We will put on a show. Also, we play 8-man, which is a much faster pace than 11-man, so there is lots of action.  We also have a great offensive and defensive scheme.

Everyone has a key role on our team, especially since we will only have 16 out this year. Without everyone there, we would not be able to do a scout team, which is really beneficial for us. Returning for us are TE/DE Derek Buessing(Sr), RB/DB JJ Hart(Sr), C/NG Kolby Talbot(Jr), and RB/LB George Volle(Jr)

The love the feeling of throwing a touchdown, and also celebrating with teammates and fans after a win.

In the Fall I run Cross Country and play Football. I play Basketball in the Winter, where I am the shooting guard. In the Spring I run Track and Field where I run distance (800,1600,3200). During the summer I play Legion Baseball, where I pitch and play centerfield.

What is it like to play for your coach? It is demanding, but really rewarding. He expects nothing less than your best every play or drill of every practice of every day. He knows what it takes to get us to where we need to be, and he is a really great guy to be around.

Our team came in 3 days a week to do football skills at 6AM, after skills we lifted weights and did plyometrics.

I have received one official offer at this moment from Bethel, and have been in contact with many other coaches regarding football and track. My plans are still undecided at this point. I’m just focused on having a great senior year.

I am almost constantly doing something active, whether it’s working on our family dairy farm, working out, being with my family, or hanging out with the boys. We always have a pick-up basketball game, batting practice, game of golf or bowling to do.

Math is my favorite subject, we have a great teacher who does an awesome job helping us understand it. 4.0 GPA

My mom. She goes head over heels for me, and I would not be where I am today without her, or my family pushing me every day.

One time when I was younger, I found a big radish in our field, and put it in my trophy case. Needless to say it did not smell the best after two weeks.

I run Cross Country and play Football in the Fall. I have cross country practice on school mornings at 6:30 a.m. then football after school. When I have Thursday meets I will practice football in the morning before school.