v Faces in KS: Caleb Haggard - Sports in Kansas 
Warning: include(../includes/bodytag.php): failed to open stream: No such file or directory in /home/kansass/public_html/ks/news/index.php on line 36

Caleb Haggard is looking for a big senior season for the Grizzlies. (Kesler Photography) 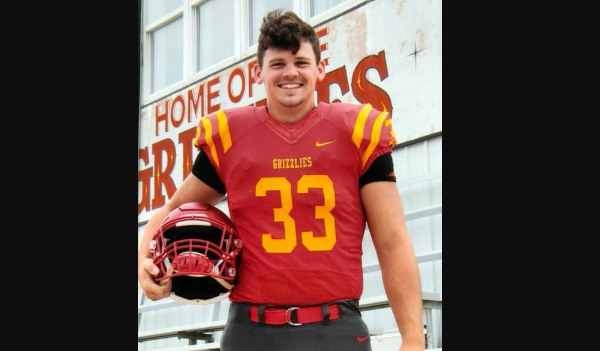 Altamont-Labette County HS senior Caleb Haggard is a four-year starter and has played multiple positions for the Grizzlies’ defense. Haggard has been highly pleased with his production for LC.

The versatile, hybrid Haggard is one of the state’s top Swiss Army Knife defensive players and has continually wreaked havoc in his career with an excellent motor and first step.

Haggard’s defensive numbers are among the best in his respective school class each year. In ’16, Haggard tied for tenth among all Kansas 11-man freshmen in sacks.

In ’17, Haggard led Kansas 11-man sophomores in sacks – one ahead of Lakin’s Hadley Panzer, a Kansas State commit.

Last year, Haggard finished tied for eighth in sacks among the state’s 11-man juniors, according to MaxPreps statistical lists.

“It’s just been a great three seasons with coach Price,” Haggard said. “And I am just ready for my senior season to come around and see what it holds for us. I am most proud of my stats that have come through the season.”

As a freshman, Haggard started off at nose guard. He played in all nine games with 28 tackles, four for loss, along with a sack, an interception, a forced fumble and fumble recovery.

Sophomore year, Price noticed Haggard’s quickness in practice one day and pushed him from nose back to safety for the first two games, a rare position change at any level. After the first two contests, LC found another player with more speed to play safety and shifted Haggard back down to defensive end after Clayton Moore broke his collarbone.

Haggard recorded a standout sophomore year as the Grizzlies went 9-2 and advanced to the quarterfinals in Class 4A, Division I.

LC tied the ’93 and ’00 squads for the furthest playoff advancements in school history. 2017 also marked the first .500-plus season since ’05. The squad captured the district and SEK League titles.

Last fall, Haggard moved back inside at defensive tackle. He recorded 54 tackles, 15.5 for loss and 5.5 sacks.

Labette County opened the season No. 5 in 4A but tumbled back to 4-5 behind a challenging schedule. LC took losses to the Bishop Miege and Pittsburg, which finished the season ranked No. 1 and 2, respectively, in the classification.

“Playing those bigger named schools that are ranked in state, it was a privilege for us,” Haggard said.

“I was not looking forward to playing defensive line much,” Haggard said. “I was told defensive end and outside linebacker, but it was a privilege to work inside, and I just think that hard work can show you what you can really do.”

This year, Haggard is expected to switch and play defensive end and outside linebacker. He is 6 foot, 1.5 inches and 225 pounds. Haggard has lifted 485 in squat, 285 on clean, 315 on bench and posted a 4.7 laser time in the 40-yard dash. He has received limited interest from colleges thus far.

“Contain outside, don’t let anyone past you, the running back, quarterback-wise, I think that was the biggest change for me,” Haggard said of being on the outside. “…“Tackle is more like contain the front line.”

Haggard grew up just north of Tulsa. He played tackle football in first grade in Oklahoma, and then moved to Kansas when his parents took jobs in Parsons. Haggard had to play flag football in second grade since Kansas did not offer tackle for his age group.

He lives around 14 minutes from the school, common for Labette County students, many of whom come from surrounding towns like Mound Valley, Edna and Bartlett.

“Our community is really supportive in the school,” Haggard said. “It’s a small town, so everyone is part of it. I wouldn’t want to play anywhere else. Teammates are great, coaches are great, and I just love the environment around the school.”

Haggard’s talent comes from numerous camps, including the well-known line camp in Carl Junction, Mo., just a few miles from the Kansas border. He said communication is probably his greatest strength.

“Just telling people where to go, as well like strong side, weak side kind of thing,” he said.

Haggard has also been to Pittsburg State, Friends University and in late July, University of Kansas. He has most enjoyed the 1-on-1 competition and live reps at the camps.

Haggard has learned multiple moves, and called his best maneuver the “club and swim.” Known for his speed, Haggard frequently takes a step inside and then rolls out to get into the backfield, too.

Labette County has the same schedule as last year, including the season opener versus Pittsburg. Haggard played well versus Pittsburg in ‘18 with four tackles, three for loss.

“He was a great leader on the field, off the field, around the school, great guy,” Haggard said.

This year, Haggard believes the team can’t “give up in the fourth quarter” and needs “to work harder.” Two of the team’s defeats, versus Wellington and Ulysses, came by a combined 21 points. Even with Dean last year, LC scored just 23.6 points per game, the program’s lowest since ’14.

Senior Nathan Smith returns after 34 catches for four receiving scores and a team-high 634 receiving yards. Senior Ethan Jameson was used sparingly on offense with just two catches, but tied for the team high with 60 tackles and picked off three passes. Junior safety Trent Brock is back after 37 stops.

Senior Austin Jones takes over for Dean at quarterback. Jones, Smith, Haggard and senior Kainen Campmier were the four leaders for the Labette County summer weight lifting teams. They are the core for a smaller senior class than the last two years.

“On the offensive side, Nathan Smith as a receiver, he should be pretty good,” Haggard said. “Ethan, he is going to play offense and defense this year as a receiver on offense and a safety on defense.

“Also Trent Brock playing safety as well for us,” he added. “Those are the top-three key players that I think that will really stand out this year, and our quarterback Austin Jones taking big spots from Easton Dean, he should do pretty good. He has been looking good all summer.”

Special thanks to Labette Bank, Bartlett Co-Op and Stockyards Travel Plaza for their support of local sports coverage with Sports in Kansas

“He pushes us every day in the morning, conditioning, lifting. I think he is just a great coach, he is a great guy outside of football. He is a type of guy you can just go to and talk about anything.”

“Probably hanging out with friends, going out and fishing. … People know everyone around here, so you pretty much have access to any ponds around the SEK.”

“I want to go to college to be an engineer or something to do with sports, like a sports trainer or something. In 10 years, I just see myself working hard still and living a great life with a great family.”

“Probably math, that’s my strong subject. But I am a great student in school, I work hard in class, out of class.”

Probably my Grandpa Jim. He has shown me what a guy can really be.