v Faces in KS: Teven Mckelvey - Sports in Kansas 
Warning: include(../includes/bodytag.php): failed to open stream: No such file or directory in /home/kansass/public_html/ks/news/index.php on line 36

Mckelvey is one of the top athletes in the state of Kansas. (photo: Jolene Ford) 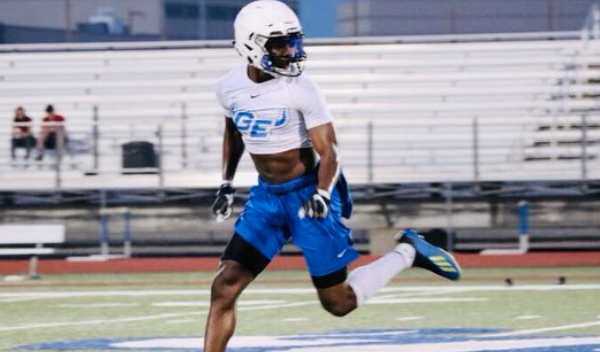 Gardner Edgerton football opened a lot of eyes in Kansas high school football last season under first year head coach Ryan Cornelsen with a 10-1 record in Class 6A. Cornselsen, who came from Hutchinson HS and had prior stints at Hays and La Crosse, has had success in football and track & field everywhere he has been. If that name sounds familiar, yes that’s the same Cornelsen family back in the day of the 5A power Liberal in Western Kansas. Ryan’s dad is Gary Cornelsen, a Kansas coaching legend in football and track at Liberal HS before retiring several years back.

Gardner Edgerton HS has also had some freak athletes over the last 10 years or so and that isn't limited to just football as the school currently has two players in the MLB in Bubba Starling and John Means who graduated from the same class in 2011. The school also became a 6A high school in the time frame. If you remember in the 1990s Gardner was a 4A high school and in much smaller leagues. Prior to Cornelsen’s arrival last fall they hit a little bit of a wall with just six wins from 2014-2017 and it was tough to come by wins. In the Bubba Starling and Trae Wrench days the Blazers did have a lot of success under another Kansas coaching legend in Marvin Diener. Diener won multiple state titles at Salina Central before taking the Gardner job in 2006 and retiring after the 2017 football season. Diener had great success at GE with a state runner-up finish 10 years ago in 2009 and also made the semifinals four consecutive years from 2008-2011. Starling, now starring for the KC Royals after making his debut earlier this month, is one of the best multiple sport athletes in the history of Kansas high school sports.

In no way shape or form are we making any comparisons to a Starling, but Gardner Edgerton seems to have another freak athlete on their hands in senior to be Teven McKelvey. McKelvey is one of the most versatile athletes in the entire state of Kansas on the football field. The 6-foot-1, 190-pound athlete is a quarterback, receiver, corner and a safety. He was a first team non-senior pick at Sports in Kansas as an athlete last fall after helping the Trailblazers to a 10-1 record, just one year after not winning a game.

He has nine offers at the FBS or FCS levels on the table heading into his senior football season. He had 31 all-purpose touchdowns last year along with over 1,200 yards. McKelvey has also been the number one ranked triple jumper for a sophomore and junior in Kansas over the last two seasons. He has a PR mark of 46'7" done as a junior last spring. In addition to the jumps, he's also a hurdler and on the 4x100 relay team. We also saw some big time dunks from him this past winter and several standout basketball games. The real question becomes what position can he be at the next level, we say take your pick. There isn’t much he can’t do.

Gardner Edgerton has high expectations this year with seven starters returning on offense and eight on defense, including 6-foot-4, 264-pound, Kansas State 2020 commit, Talor Warner, one of the state’s best lineman who returns. GE went undefeated last year in the Sunflower League but it won’t be any easy task to get through 6A with the loaded EKL and rising teams in the Sunflower.

In addition to the success Cornelsen instantly brought to the school, GE also features former NFL veteran and Smith Center native Mark Simoneau as its strength and conditioning coach. Simoneau was an All-American at Kansas State and is in the College Football Hall of Fame. If anyone knows how to get the most out of underrated Kansas kids, it’s Simoneau, who previously owned Simoneau Sports Performance before coming to Gardner.

“I am a hardworker first. We’ve done weights, hills, sand, ladders and grip training all summer. I work hard on and off the field.” McKelvey said.

Indeed, he does as he had a 4.0 GPA as a junior and has a 3.65 GPA overall as a high school student. For now, the hard work will continue as Gardner Edgerton still looks for their first ever state football title. We caught up with McKelvey below in the latest Q&A edition of Faces in Kansas.

"He's one of the better multiple sport athletes in the state. You have a 46 foot triple jumper that can play any athlete spot on the field. There is a lot of upside to that. I think too many schools are focused on his 40 time not being in the 4.4-4.5 range. The kid is an athlete and he could shine on the defensive side of the football at the next level if he needs to. He's thick as well he's not just a small kid, he's over 190-pounds and over 6'0. You can tell he's worked really hard in the last year to put himself in the position to be one of the states top player and recruits for 2020. He is kind of your swiss army knife. If he played at a 2A/3A high school he may be doing everything but driving the bus to the away games. He could be all-state in about five different positions. Watch his film, one play hes a quarterback, the next a wide reciever, the next a cornerback. He can do it all. GE should be a force this year in 6A. They lose some key pieces like the Jennings kid last year but they have talent all over there is no question."

I’ve had a football in my hands since birth and started playing at the age of 6.

State Championship for not only myself but my teammates and the town of Gardner.

I can play multiple positions, natural born leader, hard worker, and can adapt to the players around me.

It’s amazing because our student section is always packed and everyone supports the Blazers.

He’s a really good coach and person so it’s easy to play for a man like him.

I’m seeing tons of interests and my plan is to play college ball and make it to the NFL.

Hang with friends and family.

I like all classes equally and I ended my Jr. year with a 4.0. Overall, I have a 3.65 GPA. I would consider myself as an enthusiastic student.

My mother because she never stops working for my brother and I, some nights she wouldn’t eat just to put food in our stomachs.

I’m a Southern baby, i was born in Houston, Texas and that’s where my whole family lives besides my dad. I was also a lineman when I was younger.

I work super hard on and off the field, I will always put god first.