v Faces in KS: Kipp Jasper - Sports in Kansas 
Warning: include(../includes/bodytag.php): failed to open stream: No such file or directory in /home/kansass/public_html/ks/news/index.php on line 36

Kipp Jasper is back after throwing for over 1,500 yards last season for 1A Troy. 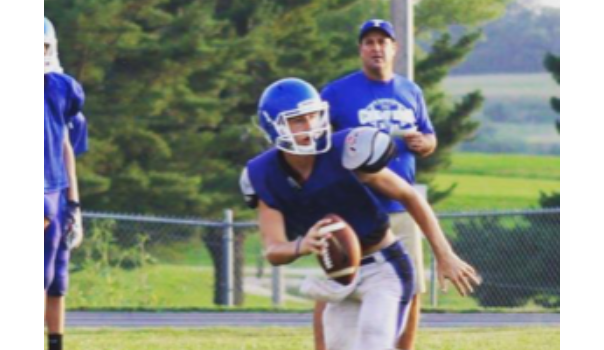 Troy High School has seen a lot of success in football over the last several seasons under head coach Derek Jasper including a first ever state football title for the school in 2016 in 2-1A and a state runner-up finish in 2015.

Jasper, a former quarterback for the Trojans himself in the early 1990s, led Troy to the playoffs in his first year as the head coach back in 2013 after the school missed the playoffs three seasons in a row. He led the Trojans to the round of eight in 2013, state semifinals in 2014, state runner-up in 2015, before ultimately the state title in 2016, slowly getting better each year to the ultimate prize.

Although the last couple of seasons, without stars like former two-time Sports in Kansas 2-1A Player of the Year Cuttar Huss,  haven’t been what Troy had at a statewide level back in 2016 they’ve still had a solid cast of players and one of those players is Jasper’s son, Kipp, a 6-foot-1, 175-pound, senior, quarterback to be on the Troy High School football team.

Troy has always had solid quarterback play under Jasper including all-state picks Tristan Speer and Reid Greaser. Jasper’s son, Kipp, had huge shoes to follow in 2017 as a first-year sophomore starter. One year after the state title team in 2016.

“Kipp has had a difficult challenge. Not only is he a coach’s son but he’s had to follow two very good all-state quarterbacks in Tristan and Reid after a state title. It’s difficult to be the quarterback in a small town and have the pressure of being the coach’s son. He’s done a great job with it and accepting the challenge. We are looking for some great things from him this year.” Derek said.

Kipp has shined in his two years as the starter. As a sophomore in 2016, he threw for 1,366 yards and 15 touchdowns. As a junior, he threw for 1,587 yards with 19 TD. He’s also added nine touchdowns on the ground and close to 1,000 more on the ground combined over the last two seasons.  Jasper has been an honorable mention pick in 1A/2-1A in each of the last two seasons. Jasper will also be asked to play both ways as a senior in football, something he hasn’t yet done in varsity football.

“I need to cut down on my interceptions this year and be the best player I can be for my team. We have some key players back in Jacob Moore, Cale Hamilton, Tate Smith, Dillon Wells, Brython Eherton, Joseph Parks and Kael Morris. Troy is a football town so we are expected to be good. Fall is a very special time for our school and town.” Kipp said.

“This season is going to be pretty special. It’s a special bond between father and son. We don’t bring a lot of it home with us. It’s not just about us though but all the kids in his class that he grew up with, it’s a special group. We are excited for it and going to enjoy the ride. We hope to be in the mix at the end of the year if we keep improving.” Derek said.

Troy lost eight seniors a year ago and lost some very close ballgames to go 6-4 in 2018. They expect to have about 30 kids out this year and have had about 90 percent participation in weights this summer. They have five starters back on offense and three on defense.

We caught up with Kipp below in the latest Q&A edition of Faces in Kansas.

“Kipp is one of the more underrated small school quarterbacks because the focus has been on other teams over the last couple of years in the class. He has a shot to be one of the best 1A quarterbacks in the state. He’s got great size at the position, can sling it around, but he has also done some with his legs. I’ve gotten to know Coach Jasper and his family very close over the last few years and he’s done a great job with that program. Regardless of football, he’s just a great dude with a great family. He’s a football junkie and lives/breathes it. Derek has the three deepest runs in the schools history and they came three years in a row. Sure they had some playoff appearances prior to him but nothing like what they did from 2014-2016. I would venture to say he would have over half the schools playoff victories as a head coach entering year seven of the program. Looking forward to following their success this year and I cannot believe that their title run was already three years ago. Time flies.”

I played in a flag football league starting when I was in 2nd grade. I was also manager for the HS football team before playing school ball in 7th grade.

Cut down the interceptions and be the best player I can be for my team to win games.

We may be the underdog in many of our games this year because our loss of senior starters from last year. Because of that, some players with little experience on Friday nights will have to step up. So I think we are very capable of turning some heads this fall.

I feel like I can challenge opposing teams by throwing and running the football. I can be unpredictable by throwing a long ball one play and picking up a first down the next with my legs.

I see Troy as a football town. Our team is expected to be good, and fun to watch every year. If there is a Friday night in Troy where the stands and the whole sideline isn’t filled with fans something is wrong. Fall is always a special and exciting time of year for our school and town.

You are never going to come to one of our games and get bored. We will always keep you on the edge of your seat and excited to see the next play. You are guaranteed to see a show.

There is just nothing like it. The feeling when you hear pads and helmets hitting each other and just being out there on the field knowing all your teammates are putting everything on the line to win the game, and the feeling of pride after winning a game can’t be topped.

Basketball. I am decent at getting into the lane and am a good passer. I haven’t played defense in football much as a sophomore or junior but will be expected to play both ways in upcoming season.

With the coach being my dad, I am obviously expected more of when it comes time to put in the work and do everything you can to be great. I can always expect to be pushed to try my hardest just because he knows what I’m capable of. It’s also a great feeling knowing he always has your back when it comes down to it.

We worked hard in the weight room, and spent extra time on our own at the field because we know we need to get better every day to succeed this offseason.

Really just undecided at this point and focusing on this upcoming season.

Having a good job in the electrical field.

I went on a trip in Idaho this past May and killed a Bear.