v Faces in KS: Tyson Struber - Sports in Kansas 
Warning: include(../includes/bodytag.php): failed to open stream: No such file or directory in /home/kansass/public_html/ks/news/index.php on line 36

Tyson Struber will be one of the top sophomores in Kansas. (photo: Braylee Dougman) 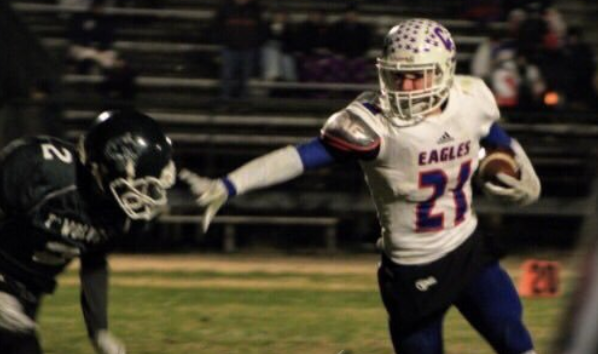 Canton-Galva emerged as one of the biggest surprises in the 2018 football season. The Eagles lost its season opener by 32 against Little River.

Then, C-G, with little recent historical success and no seniors last fall, reeled off 10 consecutive victories and multiple signature wins.

In Week 3, Canton-Galva defeated Centre-Lost Springs, 66-28, on the road. Lost Springs eventually finished 7-3 and has averaged 50 and 48 points a game the last two falls.

“After the Lost Springs game, we figured out that we could be a really good football team,” Struber said.

“We were preparing like it was the state championship, because we hadn’t been in that position to win a district championship in awhile,” Struber said.

More seminal moments followed in the playoffs. C-G defeated Burlingame, a team that had reached three straight sub-state title games, 74-26. In the quarterfinals, the Eagles traveled to Coldwater-South Central, a squad that was ranked fourth in the KPreps poll that week.

On a very cold night, the contest was tied at 52 in overtime. Several times throughout the game, C-G had called the jet sweep, usually faked to Struber, and Everett carried the ball. Everett delivered 49 carries for 231 yards and six touchdowns.

This time, the play call for the potential game-winning two-point conversion was the jet sweep - and Struber was going to have the carry.

“We knew that the defense would expect Landon to get the ball,” Struber said.

Struber stayed calm. Known for his speed, Struber received the pitch from Everett.

He raced for the end zone, beat the defense, and reached over the goal line. Struber immediately turned around and saw the official’s signal that he scored for a 54-52 victory. Canton-Galva moved into the semifinals for the first time since a state runner-up showing in ‘91.

The following week, Canton-Galva lost, 28-12, to Solomon in the semifinals. The Eagles finished 10-2 and enjoyed a six-victory improvement from the year prior, tied for Solomon for the biggest one-season eight-man wins jump from ’17 to ’18.

The Eagles, which had captured just seven total games in the previous three years, recorded its first winning season since ’14 and first year with more than five victories since a 7-4 mark in ’06. Canton-Galva went 6-0 at home.

Struber and Everett each collected KPreps first team all-state, and Everett was a SIK Finalist for Eight-Man, Division I Offensive Player of the Year.

Struber finished with 42 catches for 572 yards and 14 receiving scores and delivered 898 all-purpose yards. Struber was second nationally among eight-man freshmen in receiving yards, according to MaxPreps statistical lists.

Defensively, he recorded 66 tackles. He and Everett each picked off 10 passes as C-G hauled in 27 interceptions.

“It always just starts in the film room,” Struber said. “Because if you can narrow it down to a few things that they are going to do, like a few route combinations, like what their tendencies are. … who their go-to receiver is, what side the quarterback likes to throw to, and that just really helps.”

“And also just having good communication in the secondary and coverages, that what’s our defensive coordinator O’Connor really focuses on, is communication,” Struber added. “Because if we are not all on the same page that pick might turn into a 60-yard touchdown or a 20-yard completion.”

Struber has always been the tallest one in his class. He is currently 6-foot-2, 180 pounds and has taken part in multiple high-level camps the last several years.

His middle school tape is available on YouTube via his brother, Jake. Tyson’s only sibling, Jake was a center for Canton-Galva and a lineman at Washburn University. Tyson rushed for 17 touchdowns on 44 carries and 481 yards in seventh grade.

Before an eighth grade game, a teammate gave Struber some Skittles. He was apprehensive at first, but then ate some and scored eight touchdowns. Ever since, Struber has Skittles before each contest.

He has already posted 4.63 seconds in the 40-yard dash. Struber was one of two freshmen boys to qualify for the 1A state boys’ high jump.

Of the more than 230 athletes invited to the Jake Sharp Top Prospect combine in late June in Salina, Struber was one of just 11 sophomores – and the only eight-man player invited.

His long term goal is the NFL, and he would love to play for Kansas State.

Struber gave credit for his development to the Eagle coaching staff of Hoppes, a C-G graduate, and O’Connor, a standout on the ’07 Wallace County-Sharon Springs state championship squad. O’Connor runs the weight room.

O’Connor’s father, Larry, is the highly successful basketball coach who has won state titles with Brewster and Sharon Springs. Struber, who carries a 3.39 GPA, said his favorite subject is science. O’Connor is his teacher.

“(O’Connor) knows exactly what we need to be doing,” Struber said. “How we need to work on things, and he focuses on form.”

Canton-Galva is high on the preseason short list for Eight-Man, Division I favorites, a classification that is expected to undergo significant change. C-G returns everyone, and Struber labeled ’19 “a whole different situation.”

“We have not been in this position in awhile,” Struber said. “Last year, Hoppes talked about how teams might be coming to play us expecting to win, and we had to prove something. But this year, we are going to be expected to win all these games, and so we kind of flipped a switch.”

Seniors Jay Nightingale, Kinser Colgin and Nick Pearson, along with juniors Brandon Huff and Tyler Rummel are among key returners. Pearson, a fullback/linebacker, has picked an offer from McPherson College.

“Without them putting in the work, we can’t be a complete football team,” Struber said.

Many of the top squads last year, including titlist Central Plains, runner-up Solomon, Clifton-Clyde and Hoxie have had significant graduation losses. Canton-Galva has been active on social media regarding their goal to get to state.

”Even more motivated this year, and we are getting in the weight room everyday,” Struber said.

Chet Kuplen, CEO/Founder of Sports in Kansas, on Struber

"In high school football you don't often see freshman as contributors at the varsity level. Sure there are some four-year starters at a lot of smaller programs and occassionally you'll get some at the 5A/6As but Tyson was an immediate all-state caliber kid. I know what you're thinking, yeah it's small town 8-man football and thats the only reason why, who cares, right? I can tell you right now that he would contribute to any program in the state last year at any level and don't overlook the 8-man or small school talent. If you know anything about Kansas high school football you know theres talent at any level. He's one of the best 2022s I've seen so far in Kansas and thats easy to say now because we've not seen a lot of the other ones cause those kids haven't gotten their opportunities yet as its so rare to even see the field for a lot of kids until a sophomore/junior year. He has size, speed and he's got a lot of room for improvement. You wouldn't think he was a 14-15 year old kid doing the thing he was doing last year like 10 INTs on defense and 71 tackles, 810 and 12 tds as a WR. They have a shot to be a legit state championship contender as they graduated zero off a very solid team last year. Landon Everett and Tyson will have a shot to be player of the year type of kids in the class on either side of the ball. "

This feature is presented by Home Communications, Inc. Technology That Connects You To The World. Best of luck to Canton-Galva and Tyson Struber this season. See our ad in the top right corner.

“It’s amazing. Starting the school day off wearing your jersey through the hallways, you just feel that level of respect from everybody. Getting on that bus ride, seeing all these people lined up on the streets, cheering you on, making banners, wearing shirts and jerseys. Driving over an underpass and you’ve got people parked up (there) cheering you on. Just finally getting to the game and walking onto the field, seeing everybody screaming for you. It’s just the best feeling.”

“All those linemen, that’s really where it starts. Because without (them), Landon can’t run the ball, we can’t get the ball to our running back, we can’t have time. … They are probably some of the hardest workers in the state.”

What is a quote that stays with you?

“I just enjoy hanging with my friends and family. Living life as a kid, as a teenager.”

“I just hope to have a successful job and career to support my family. I am going to be working from here until then obviously to accomplish my dream.”

“My favorite subject would probably have to be science. I just really enjoy it.”

“My parents (Tara and Jim) and my brother. They are always just keeping me on track. … They just do so much for me, and I couldn’t be more thankful for that.”

“A lot of us football guys like to go to the Imperial Garden in McPherson.”