v Faces in KS: Matt Sellers of Rack Performance - Sports in Kansas 
Warning: include(../includes/bodytag.php): failed to open stream: No such file or directory in /home/kansass/public_html/ks/news/index.php on line 36 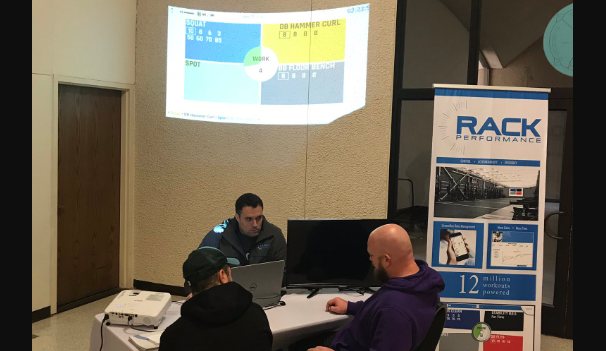 Matt Sellers played for two years at Coffeyville Community College and then walked on at Kansas State. He returned to Coffeyville and coached for five seasons, and assisted Aquinas coach Randy Dreiling for a couple falls with the Saints freshmen.

He was coaching at Coffeyville when Hudl, a ground-breaking video, scouting and performance analysis tool, rose to prominence.

At the time, Sellers, like the majority of coaches, had to drive hundreds of miles for video exchanges with opposing staffs. That included a 417-mile round trip to Junction City to exchange with Highland Community College. Then, Hudl arrived with its Cloud-based exchange.

“It was revolutionary,” Matt said. “And we could do the film editing from home. Wouldn’t have to sit in the office until 2, 3 a.m. on Saturday nights, and after practices.”

Five years ago, Matt and his brother, Sam, and Dan Smith met. Sam is the head football coach at Salina South for the last decade, and Dan was then South’s strength coach.

“It was a little bit tedious to create those,” Matt said. “And then it wasn’t really applicable outside of that room to other coaches that wanted to do it.”

The Sellers brothers and Smith partnered together to create Rack Performance, currently a fast-growing company that serves weight rooms nationwide.

“The weight room was one of the last frontiers to be digitized in sports,” Matt said. “…It looked like an environment that was kind of due to be disrupted with some digital solutions.”

About 250,000 athletes are on the platform, and 135 Kansas schools use Rack. Sellers said, especially for the bigger schools, it’s 40 percent girls, 60 percent boys on the digital platform.

Sellers is most proud of “impacting as many athletes day to day positively as our application does.” Rack is located in Overland Park, and available online at rackperformance.com.

“The bread and butter of Rack is that it basically takes a coach’s workout, his sets, his reps, his percentages, and it allows him to dictate the tempo with more control,” Sellers said. “And it offsets that workload onto our software, which frees up the coach to teach and motivate, and actually engage with the athletes while our software is kind of controlling the tempo and the logistics of the room.”

In 2014, Rack started creating the software. The first project was replacing Salina South’s PowerPoint. Rack built its initial timing system based on how South’s weight room was set up. Sam and Smith called Matt after South completed its first workout with the new software. The Sellers brothers still talk Rack Performance several times a week.

“They said it blew them away,” Matt said. “And we were pretty excited. That was probably the highest it’s been. That was a really good feeling.”

Then, they had several Kansas coaches take a chance and buy the product.

The partners incorporated the business, started selling the program and raised some local money to allow them to work the company full-time. The first coach to pay Rack was Kyle Littrell, then at Louisburg and now in his third season at Lacygne-Prairie View.

“Raising the money is nice, but honestly the money is just fuel, it’s just to allow us to keep growing, keep building, to make it as good as we can,” Matt said. “Obviously, it’s a validator of the business model, but really the things that get us excited are working with the coaches and with the athletes, solving problems for them.”

Last year, SES also had a four-win improvement, went 8-2 and had its most wins since ’11. Aquinas captured the first football state title in school annals. Slade led Campus to its first two playoff victories in the last two falls.

McPherson enjoyed its best start in more than 90 years in ’18 and reached the state semifinals.

“When the programs that we work with have success, it feels pretty good,” Matt said. “It feels good to be a small part of it.”

Marysville, coached by Dustin Heuer, Matt’s brother, uses Rack. Powerhouse Bishop Miege has Rack as does St. Mary’s Colgan  and Hesston has been with Rack for many years.

“As we’ve brought on other customers, they’ve had different needs, so we really pride ourselves in building a pretty customizable platform that’s still easy to use,” Sellers said. “And we can work with anywhere from a school with one rack that has four kids lifting to schools down in Texas that have up to 150 kids in the weight room with 30 racks or even more.”

Rack has helped coaches in a variety of areas, most notably data management, data visualization and tracking the progress of athletes. Rack has added the ability for coaches to collaborate, share workouts across the country, build their own school page and navigate across the Rack community.

“We think coaches are the cornerstone of communities,” Matt said. “And we look at ourselves as an assistant coach that aims to make their life easier everyday. That’s probably our biggest focus right now is just finding out other ways that we can make their life a little bit easier, and their job a little more effective.”

Rack has scaled a sales force, added some marketing and bolstered the development room. Matt estimated Rack staffers have been in 5,000 weight rooms.

Webb City (Mo.), one of the country’s most well-known and highly successful programs, is one of the teams that has a positive testimonial on Rack’s website. Another storied school, Southlake (Tex.) Carroll, is involved with Rack.

“Rack Performance is a game changer,” longtime Webb City coach John Roderique said on the Rack site. “It has allowed us to focus on coaching our kids with constant feedback and encouragement. Our kids and our program have benefited greatly.”

Notably, Texas, Georgia, California and Illinois have had schools buy Rack. Texas students have an athletic period, and can have football practice count as P.E. credit. Football players come through the weight room together, and each program runs their own strength program.

“They take sports really serious down there, and their weight rooms are incredible,” Matt said of Texas. “We have benefited a lot from that.”

Michael Jones, also from the Salina area, is the lead developer, and Smith joined Rack several years ago. Rack has a team of three developers.

“Working on some pretty exciting things for the future,” Matt said.

You can find more info on Rack Performance here