v Faces in KS: Ty Black - Sports in Kansas 
Warning: include(../includes/bodytag.php): failed to open stream: No such file or directory in /home/kansass/public_html/ks/news/index.php on line 36

Ty Black is ready for a big year for the Cougars. (photo: Claire Moore) 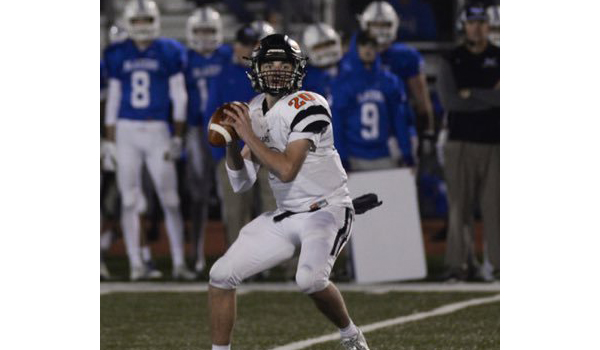 Football has been a major part of Ty Black’s life as long as he can remember. The son of a high school coach, Black took in numerous practices and games throughout his childhood whether he was playing or helping out his dad.

One thing unique about Black that sets him apart from your typical high school football player is that his dad happens to be his head coach. Bo, his father, has been a longtime coach with 13 years as the head coach at Great Bend, one year at Hays HS, and now most recently at SM Northwest since 2015. Black took Great Bend HS to a 5A state runner up finish in 2006.

“It’s great to play for my coach. It’s also great because he’s my dad,” said Black. “It really is a lot of fun because I’ve been around him coaching since I was young. He pushes me and our team to be the best we can be on and off the field and he stresses the important things like selflessness and putting the team first.”

This year the junior quarterback will look to make the most of his junior football season playing for his father and the Shawnee Mission Northwest Cougars.

Standing at 6-foot-1 and 190 pounds, Black was the centerpiece in the Northwest offense last year under center. He threw for an impressive 2,695 yards and 24 touchdowns during his one season as the starter. Black is a very accurate passer, in fact he has only thrown 10 interceptions compared to 24 touchdowns.

As a result of his work on the field, he was a finalist for the Sports in Kansas Non-Senior Offensive Player of the Year in 2018, in addition to being named honorable mention in a loaded Sunflower League as a sophomore.

Being a very well-rounded athlete Black also participates in Basketball and Track. This past spring, he was a part of Northwest’s state 4x400 team. In addition to athletics he is very strong in the classroom as he holds a 3.9 GPA.

Black is planning on playing football in college but has a lot of things he wants to accomplish this fall before turning his full attention to the next level.

“I’ve seen some interest at the next level,” he said. “My plans are to play at the next level. At the same time, I don’t want to worry about that too much right now. I want to focus on being the best teammate and having a great season this year.”

Black and his teammates have a lot to be optimistic about in 2019 as the Cougars return eight offensive and three defensive starters from last year’s team which went 5-5; Northwest’s best mark since 2010. As a result, the expectations are high for Black and Shawnee Mission Northwest.

“Our goals are to win the Sunflower League and win the 6A State championship,” stated Black.  “We have a bunch of returning starters and weapons on offense. We also have hungry players on defense that can make big plays. We wanted to start to build a winning culture here at Northwest and I believe this is the year where we can go far into the playoffs.”

You might want to keep an eye on Black and the Cougars the next two falls. If things go according to plan Northwest might put themselves in a position that the Cougars haven’t seen since legendary coach Tony Severino was at the helm. Northwest made the 6A playoffs round of eight back in 2010 but hasn't been in a semifinal or state title game since the early 1980s with the last state title coming in 1981.

This feature is presented by Shawnee Mission Northwest Booster Club, proud to support the Cougars. Best of luck in 2019!

Chet Kuplen, CEO/Founder of Sports in Kansas, on Black

"He has obviously been around the game his whole life and you could tell that last year when he got his feet wet in varsity football. He really shined last year and put up some big numbers. I feel like SMNW is in good hands with him under center over the next two seasons. He's also very accurate completing nearly 60% of his passes last season. He's very patient and showed the ability to make throws on the run. Not only he is accurate he looks so smooth and the arm strength is there. He's not afraid to put his head down and run it either. He should have a lot of time to make throws this year with four of five returning on the line. If you watched his film from last season you wouldn't think he wasnt someone starting for the first time or a sophomore in high school. He will need to get a little stronger in the weight room but that will come as his body matures over the next couple of seasons. Really like what I see with him so get used to hearing his name or seeing his name in the leaderboards. Quite the sports family with his dad being a longtime known head coach in Kansas and his sister, Hannah, an all-state volleyball player headed to Washburn."

I got involved in football at a young age because my dad was the head coach in Great Bend. I would be the ball boy for all of the games. I was at most of the practices and I really liked being around all of the players.

Our goals are to win the Sunflower League and win the 6A State championship.

Absolutely, we have a bunch of returning starters and weapons of offense. We also have hungry players on defense that can make big plays. We wanted to start to build a winning culture here at Northwest and I believe this is the year where we can go far into the playoffs.

I feel like I’m a force because I feel like I can lead our team and take control of the game.

The atmosphere is great. We have a student body that will bring the energy at every game. Plus, all of the schools are close together, so every Friday night feels like a rivalry game.

It would be a fun game to watch. Our offense is built around moving fast and making big plays. We definitely have playmakers that can do that.

Ty Lindenman is the first guy that comes to mind. Any time he has the ball in his hands it’s something special to watch, he’s quick and speedy. Another key player is on the defensive side is Phillip Vesta he can also make big plays on defense as our safety. The offensive line is going to be great too with 4 out 5 returning.

My favorite thing about football is being around my teammates. We go through everything together and this year it feels more like a brotherhood because we spend a lot of time with each other.

I play basketball and run track. I play shooting guard and I qualified for state in the 4x400.

It’s great to play for my coach. It’s also great because he’s my dad. It really is a lot of fun because I’ve been around him coaching since I was young. He pushes me and our team to be the best we can be on and off the field and he stresses the important things like selflessness and putting the team first.

We really put a lot of work in this offseason. We started lifting in the weight room in December at 6:30 each day. This summer we’ve been lifting and practicing each day at 7 in the morning. We’ve also gotten better by scrimmaging other teams down at Pitt State and Missouri Western.

I’ve seen some interest at the next level. My plans are to play at the next level. At the same time, I don’t want to worry about that too much right now. I want to focus on being the best teammate and having a great season this year.

I like to read and spend time with my family.

I’m not sure what I want to do career wise, but I hope to find something that I am passionate about and love to do.

My favorite subject is weights because I’m around most of my teammates and my dad coaches the class so it’s always fun. My GPA is a 3.9.

My role models are my parents because they set good examples for me and they both want the best for me on and off of the field.

Definitely The Peanut, every time I go I have to get the buffalo wings because they’re the best.

I lived in Great Bend, KS for 10 years and then moved to Hays, KS for 1 year and this will be my 5th year in Shawnee.

My sister, Hannah, will be going to Washburn to play volleyball.