v Faces in KS: Beau Palmer - Sports in Kansas 
Warning: include(../includes/bodytag.php): failed to open stream: No such file or directory in /home/kansass/public_html/ks/news/index.php on line 36 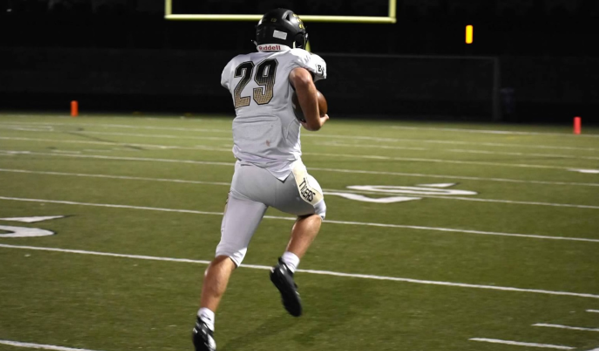 When having a conversation about 6A programs with a history of winning and great players it usually won’t take long before someone mentions Blue Valley. The Tigers have won six state titles and as of late have made two state championship appearances in the previous 4 years. This year Blue Valley will be led by senior linebacker/running back Beau Palmer who is one of the top players across Kansas.

Palmer had a very impressive junior year at safety where he recorded 66 total tackles, three interceptions, two forced fumbles, and a sack. His efforts brought him First Team Sports in Kansas All State Non-Senior and all-league honors at safety. While on offense, Palmer garnered 165 rushing yards, 109 receiving yards and four touchdowns at running back.

It is safe to say Palmer has a very good football pedigree as he comes from a strong football family.  His Grandpa, J.D Helm played at KU and coached for the Kansas City Chiefs. While his uncle Adam Helm played Quarterback for Kansas State in the late 90’s. Also, his father helped coach him all the way up until middle school.

Palmer plans on playing at the next level and possesses a very athletic frame at 6-foot-3 and 210 pounds, which offers him great potential and versatility in the future on both sides of the ball.

“I have been invited on visits and in discussion with D1 schools,” Palmer said. “My plan is to play somewhere where I feel at home and can make a big difference within the program.”

In addition to Palmer, the Tigers return some key players including four starters on offense and three on defense; including Iowa commit Mason Richman, who stars on both the offensive and defensive line.

“I don’t ever think our linemen get enough credit,” Palmer added.  “It all starts upfront on both sides of the ball. Some of our returning starters on the line, Mason Richman, Evan Taylor, Trevor Lister, and Sterling Smithson will all have big seasons. Also, keep an eye out for Clayton Power, who will be a force on the defensive line. Jake Wolff (QB) and Dorian Stephens (WR) should keep things exciting on offense this year.”

Blue Valley will have a strong schedule ahead of them in the always loaded Eastern Kansas League which features defending state champions St. Thomas Aquinas (5A) and Bishop Miege (4A).

His teammates and him still have a lot of goals they want to accomplish this fall.

“Our goal is to win a state title. We have a lot of talent on the team this year and we have a great group of coaches leading us. We are very motivated and determined to win state,” Palmer said.

We caught up with Palmer below in the latest Q&A edition of Faces in Kansas.

Chet Kuplen, CEO/Founder of Sports in Kansas, on Palmer

"He has the opportunity to be one of the better players in Class 6A this season as he was for a junior last fall. He has a great combination of size and speed. He's a little under the radar right now in recruiting so far but he will get his shot as BV is always producing college talent just about as much as anyone. It may have been a bit of a down year for BV last year but I do expect a bounce back year for the program. Nobody quite realizes how good of a league the EKL is until you are around it all the time or play in it. A team with a losing or .500 record is capable of making deep runs in the playoffs and its been done in very recent memory. Blue Valley has traditionally been one of the best programs in the state and they have some talent back this season and Palmer will play a key role in trying to help them make a run in 6A."

I come from a football family. My Grandpa, J.D Helm, played for KU and was an NFL coach for the Kansas City Chiefs. My Uncle, Adam Helm, played for K-State. I have been playing football since I could walk and I was lucky enough to have my dad coach me from when I was little up to middle school.

Our goal is to win the 6A State Title.

Absolutely. We have a lot of talent on the team this year and we have a great group of coaches leading us. We are very motivated and determined to win state.

I like to hit and I like to make plays. There is no better feeling than putting in the work in the off-season and letting it show on the field.

There is no place like Blue Valley on a Friday Night. In my opinion the culture and tradition is unparalleled to any other school. The fans are amazing and bring it every game. Every time that we step on the field we can feel Coach Driskell with us. The Blue Valley field should be named after Coach D.

I bring it all to every play every game for my team. If you want to see someone excited and passionate about playing the game of football then you should definitely come watch me.

I don’t ever think our linemen get enough credit. It all starts upfront on both sides of the ball. Some of our returning starters on the line, Mason Richman, Evan Taylor, Trevor Lister, and Sterling Smithson will all have big seasons. Also, keep an eye out for Clayton Power, who will be a force on the defensive line. Jake Wolff (QB) and Dorian Stephens (WR) should keep things exciting on offense this year.

I have built some great relationships with some amazing coaches and players over the years working towards the same goal playing the sport that I love.

I have played every sport since I was little from Lacrosse, Soccer, Baseball, Basketball, and track. My favorites have always been basketball and football and I love representing my high school.

Coach Terrell is a great coach and a great guy. He challenges me to be my best on and field and in the classroom. I am also very excited to have a new position coach this year, Coach Demetrius Bernard. He will bring a lot of knowledge to the defense along with passion and excitement to the sideline which will really help us this year.

My team and I have been working hard every morning at 6 AM along with attending jamborees and other scrimmages. I also began working out with Coach Joseph Potts and Coach Cassius Sendish at Topspeed which has really helped me elevate my game.

I have been invited on visits and in discussion with D1 schools. My plan is to play somewhere where I feel at home and can make a big difference within the program.

I enjoy spending time with my family and extended family. I also like the outdoors. I enjoy riding ATV’S, fishing and hiking.

My dream has always been to play in the NFL. I see myself making a positive impact in my community and in my family. I know God has a plan for me and I hope to be where I should be.

My favorite subject in school is Social Studies/History Class. It is exciting to learn about the history of our country and the world and I have also had some great teachers. I have a 3.4  GPA.

My personal role models are my mom and my dad. They are my biggest supporters and are always challenging me to be my best on and off the field and in my faith. My professional role model is J.J Watt. I love what he does for the community and I can see my path being similar to his. On the field he is a beast and off the field and he really cares about his community and has helped so many people in need. He is the player and person I strive to be.

My favorite place to eat is Lucille’s in Louisburg. The food there is amazing.

I have an extremely strong faith and love for God. I truly believe he has a plan for me.