v 2019 Sports in Kansas 2-1A All-State Baseball Team - Sports in Kansas 
Warning: include(../includes/bodytag.php): failed to open stream: No such file or directory in /home/kansass/public_html/ks/news/index.php on line 36

Zinn helped Marion to a state runner-up finish behind undefeated champion Elkhart. He carried a .493 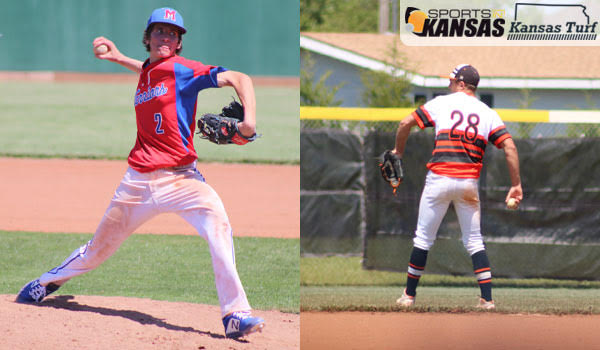 2019 Sports in Kansas 2-1A Baseball Player of the Year

Also one of the state’s best quarterbacks, Whisennand completed an outstanding ’18-19 school year when he paced the Wildcats to an undefeated season and 2-1A state title. He batted .577 (30 of 52) with 10 doubles, three triples, a homer and 24 RBI. He scored 45 runs with 33 stolen bases. On the mound, he posted a 4-0 record and 2.39 ERA with a 25/15 strikeout to walk rate in 26.1 innings for 22-0 Elkhart. Whisennand was a two-time first team all-state quarterback. Whisennand was part of a talented Elkhart senior class in fooball/baseball that included Elian Prieto, Javier Gomez and Sage Hoskinson.

2019 Sports in Kansas 2-1A Baseball Pitcher of the Year

Carlsons' Grocery is proud to support Marion Baseball. Congrats to Sam Zinn on the Sports in Kansas 2-1A Pitcher of the Year.

In 2018, Elkhart was the No. 1 seed in the Class 2-1A state tournament and lost to traditional power Colgan in the first round. Since preseason, Aranda had set a goal to win the state title. The Wildcats again were the No. 1 seed in a field that, in a rare occurrence, did not include Colgan. Elkhart finished 22-0 with a 4-1 victory against Wichita Independent, a 14-2 victory versus Humboldt and 3-2 walk-off win versus Marion in the finals. Marion finished 20-2. Elkhart captured its first title since 2002 as Elian Prieto scored the game-winning run on a passed ball. As a team, Elkhart batted .331 with a .494 on-base percentage with a 1.77 earned-run average and a .915 fielding percentage. Whisennand led the team in batting, though Gomez hit .460 and Prieto batted .422.  Last year’s 20-3 season included a .342 average, .499 on-base percentage and 3.49 earned-run average. Elkhart had significant pitching improvements from ’18 from Gomez (1-0, 0.64 ERA) and junior Garrett Hall (8-0, 1.70 ERA in team-high 37 innings).