v 2019 Sports in Kansas 6A All-State Softball Team - Sports in Kansas 
Warning: include(../includes/bodytag.php): failed to open stream: No such file or directory in /home/kansass/public_html/ks/news/index.php on line 36 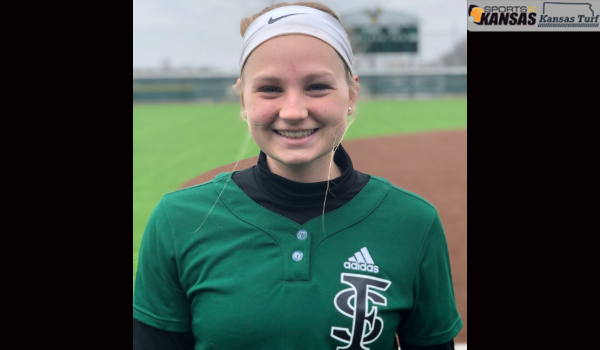 2019 Sports in Kansas 6A Softball Player of the Year

Clopton, a sophomore and Oklahoma State commit, was the Sports in Kansas co-Most Outstanding Player at the state tournament as a freshman and followed up with a brilliant season that yielded Gatorade Player of the Year honors. The 5-foot-10 Clopton, known for her energy, delivered a 16-1 record, 0.52 ERA with 212 strikeouts and just 15 walks in 101 innings. At the plate, she carried a .357 batting average and a .541 on-base percentage and 30 runs scored. Free State has captured its only two softball crowns in the last two springs.

This year, Free State did not allow a run at the state tournament with a 6-0 victory versus Olathe Northwest, a 1-0 win against Olathe North and a 1-0 victory versus Washburn Rural. As well, Clopton worked a perfect game in a 1-0 win versus Haysville Campus in the regional championship game. Free State did not allow a run in any of its five postseason games. Clopton helped Free State permitted 1.4 runs a contest this year. For the Class of 2021, Clopton is ranked as the No. 11 national recruit by Softball America. Her mother, Sarah (Workman) Clopton, was a former All-Big 12 first team pitcher for Kansas in the ‘90s.

The Firebirds captured their second straight Class 6A state softball title with a 1-0 win against Washburn Rural. FS went 23-2 and gave Rural its first loss of the season as the Junior Blues finished 23-1. Free State had lost to Rural during the season. Ice, who also earned coach of the year honors in ’18, had a key tactical choice in the seventh inning of the state title. With two out and the tying run in scoring position, ace Tatum Clopton intentionally walked WR standout Kasey Hamilton and then struck out Jenna Moore to win the game. Earlier in the season, Free State pitched to Hamilton – who hit over .600 - and she hit a three-run homer in a 5-2 Rural victory on April 19. As well, Free State third baseman Lauryn Jones made a key play with the bases loaded earlier in the championship contest, and sophomore shortstop Sara Roszak, a first team all-state selection, played well in the field. Roszak batted .447 with five homers and 34 RBI, while first team all-state infielder Georgia Rea hit .500.

2019 Sports in Kansas 6A All-State Softball