v 2019 Sports in Kansas 4A All-State Softball Team - Sports in Kansas 
Warning: include(../includes/bodytag.php): failed to open stream: No such file or directory in /home/kansass/public_html/ks/news/index.php on line 36

Gracie Johnston of Augusta is named SIK POY in 4A. (courtesy photo) 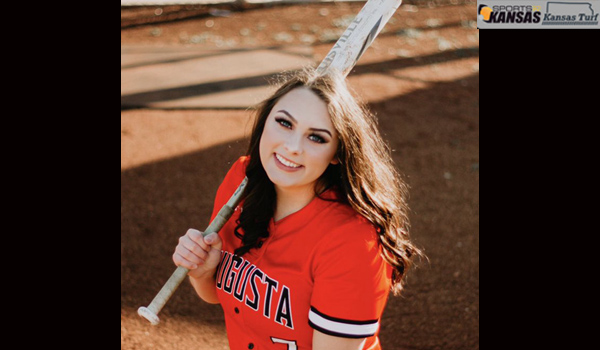 2019 Sports in Kansas 4A Softball Player of the Year

A Missouri State signee and the first Division I softball player in Augusta’s powerhouse program, Johnston again delivered  a special season en route to the Class 4A state title. At state, Johnston worked every inning with 41 strikeouts in 21 innings. A two-time all-state player, Johnston went 17-1 with 199 strikeouts in 106 innings with a 0.79 earned-run average and seven shutouts. She had one perfect game en route to league MVP honors. Johnston In 2018, Johnston helped Augusta to a 19-2 season and also collected conference MVP with four shutouts in 10 starts.

Johnston’s sister, Sophie, was a standout junior catcher and carried a .486 average with just one error, and Bailey Pennycuff batted .565 with zero errors. Strong consideration for player of the year also went to Andale-Garden Plain outfielder Macie Eck, the team’s only senior and Notre Dame signee. Eck enjoyed another great season with her third all-state selection with a .506 average and 42 RBIs.

Second-year head coach Jamie VanDever, a former Augusta assistant, led the Orioles to the 4A state title. As expected, Augusta and Andale-Garden Plain were the top-two teams in Class 4A. The squads had split their regular season meetings and hadn’t suffered any other defeats entering the state tournament. A-GP was the No. 1 seed, while Augusta was second.

The Orioles defeated a solid Anderson County squad, 1-0, in the first round and held off Clay Center/Wakefield, 6-0, in the semifinals. In the championship, Augusta completed a 24-1 season with a 5-2 win versus A-GP, which finished 23-2. The Orioles have captured titles in 2000, ’14 and ’15. Augusta had great pitching from Gracie Johnston and airtight defense from standouts Sophie Johnston and Bailey Pennycuff. Last year, Augusta lost just twice, including in the regional championship, before coming back to win the title this year.

2019 Sports in Kansas 4A All-State Softball