v 2019 Sports in Kansas 2-1A All-State Softball Team - Sports in Kansas 
Warning: include(../includes/bodytag.php): failed to open stream: No such file or directory in /home/kansass/public_html/ks/news/index.php on line 36 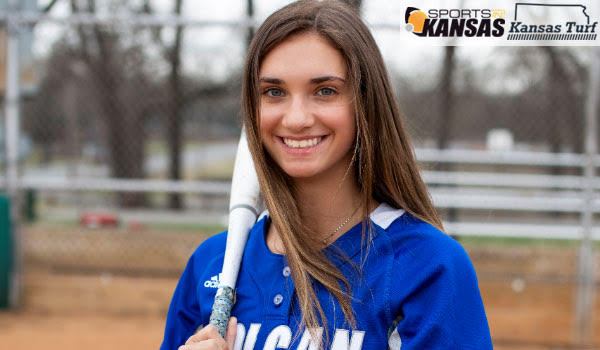 2019 Sports in Kansas 2-1A Softball Player of the Year

Crossland, a sophomore, paced the Panthers to a 2-1A state title. She went 16-1 in the circle with 103 strikeouts. At the plate, she batted .462 with a .484 on-base percentage and a .802 slugging percentage. Crossland delivered 42 hits with four homers, including a grand slam in the state championship, with 37 RBI. Crossland earned the win, delivered three hits with four RBIs in the 10-7 state title versus Oskaloosa. Colgan went 24-2 and lost to Riverton and Frontenac in splits, the Class 3A state champion. Crossland earned first team all-state and unanimous first team all-CNC league. She also collected all-state honorable mention in ’18.

Kanaar Eye Care would like to congratulate Kaitlin Crossland on the 2019 Sports in Kansas 2-1A Player of the Year and the 2019 2-1A State Champs!

Watco Companies is proud to support local athletics in Southeast Kansas. Congrats to all of the Panthers on their success in 2019. Congrats to Kaitlin Crossland as the SIK 2-1A POY!

Midwest Minerals would like to congratulate the SMC Panthers on their 2019 2-1A State Championship in Softball. Congrats to all of the players and coaches on their accomplishments this season!

The Panthers won a wide-open 2-1A field that didn’t have Chase County, Alma-Wabaunsee, or Udall in the state tournament under coach Annie Dellasega, in her first year as head coach after she served as an assistant in ‘18. Those squads finished in the top-4 in the ’18 tournament, and Wabaunsee, the defending champion, was the favorite entering the spring. Colgan captured its second softball title with a 10-7 win against Oskaloosa. Overall, Colgan had five seniors – all four-year starters - and defeated Sacred Heart, 17-0 in three innings, and Jayhawk-Linn, 14-0 in four innings, before a 10-1 lead against Oskaloosa. Colgan’s other softball crown came in ’10.

The St. Mary’s Colgan Booster Club would like to congratulate the Colgan Panthers on all of their success this softball season. Congrats to the 2-1A State Champs!