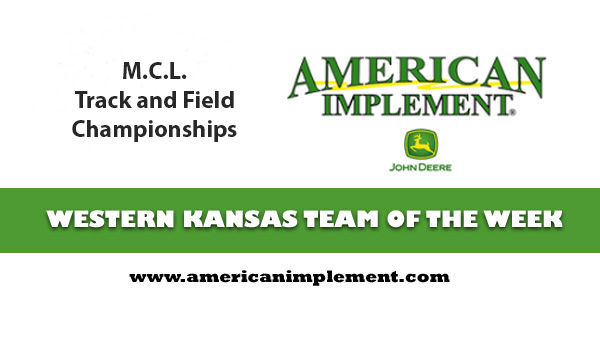 The Mid-Continent League is one of the state’s best and most tradition-laden conferences. Last week, the Norton girls won a highly contested league championship with 105 points, just ahead of Thomas More Prep-Marian’s 96.5. Phillipsburg took third at 78.8333, and Plainville was fourth at 69.333.

Norton repeated as the girls’ titlists. Last year, the Bluejays tallied 98 points, four ahead of TMP.

On the boys’ side, TMP collected 105 points and won by a bigger margin over runner-up Smith Center’s 88 points. Plainville took third with 73. Coach Jason Jones is the Bluejays’ longtime head track coach and known for his work in the pole vault.

Braun is among the state’s best in both events with under 12.5 in the 100 and 26.6 in the 200, according to Kansas historian Carol Swenson’s statewide lists.

Norton’s dominance showed up in the relays. The Bluejays ran 51.13 with Engelbert, Brooks, Braun and Courtney Jones to win the 400 relay by 1.17 seconds, a bigger gap than second to fifth.

The Bluejays captured the 1,600 relay in 4:18.73 with Engelbert, Jones, Kats and Hannah Bailey. Norton has posted under 4:15 in the relay, which is one of Kansas’ top marks.

In the triple jump, Delilah Geringer earned fourth in 33-3.5. Wolf captured the event in 34-11. In the throws, Phillipsburg’s Ashley Babcock continues to put together a huge year and has set school records in all three disciplines. She won the shot put (38-9.5) and discus (115-9) and was third in the javelin (117-3).

In the javelin, Norton’s Jaida McEwen took second in 119-6. McEwen has thrown over 126 feet in the event this season, one of the state’s top marks. Courtney Jones, who has cleared 10 feet in the pole vault, was second in the event in 9-6.