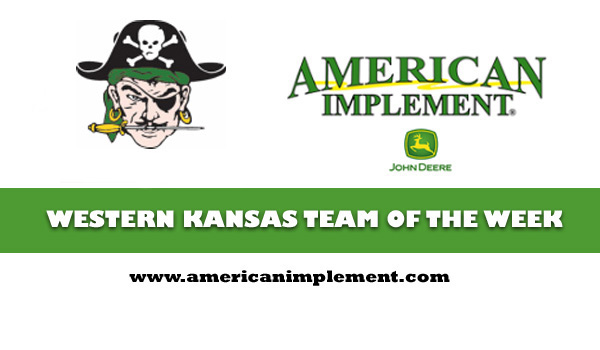 Rolla junior Alexandria Hart, one of best track athletes for all classes, enjoyed a banner day at the Red Ace Relays in Bucklin on Friday. The competition featured 15 teams.

Hart scored 40 of her team’s 42.5 points and helped the Pirates to a sixth-place finish on the girls’ side. The Rolla boys took 12th with 15 points. Montezuma-South Gray won the boys’ division with 83 points, and the girls’ side at 72.5.

In the high jump, Hart extended her season best with a leap of 5-7. She bested South Central’s Jordyn Jellison, an outstanding multi-sport athlete and Sterling College volleyball signee, who went 5-0.

Entering last week, no one had jumped better than a 5-6.25 mark set by Class 5A Pittsburg’s Laken Robinson, according to Kansas historian Carol Swenson. Hart had previously recorded a jump of 5-6 and tied with Thunder Ridge’s Mariah Stauffer, a Fort Hays track signee, for the best jump in 1A.

Hart easily rolled in the 100 meter hurdles in a time of 15.37, nearly a second ahead of the field. She captured the long jump by five inches in a leap of 16-11. In the triple jump, Hart had another huge showing with a jump of 35-10 and won by nearly two and a half feet.

Hart had ranked second in the hurdles at 15.55 and is currently just .01 behind Osborne’s Afftin Conway, who had the classification lead entering last week.

She ran on the 400-meter relay that finished ninth and did not reach finals. In the high jump, Hart was second in a very close competition. Linn’s Shelby Ohlde and Hart each went 5-6 and cleared 5-6 on first attempts. However, Ohlde won because she cleared 5-4 on her first, and Hart needed a second attempt. In the triple jump, Hart took fifth in 34-4.25, an event Doebele won.