Hoxie named team of the week. 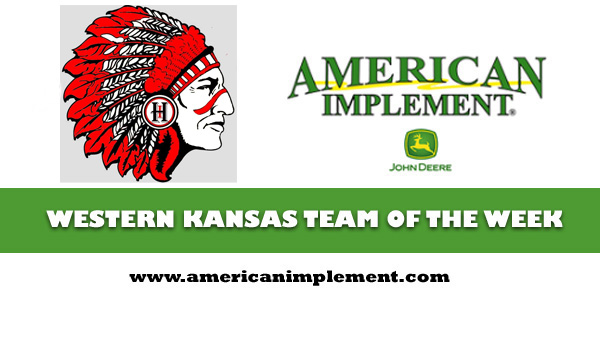 The Hoxie track teams, led by thrower Trinity Balluch and distance runner Thaddeus Friess, posted another strong showing at the Quinter track meet last Friday, annually one of the largest small-school meets in the western half of Kansas.

Last year, Hoxie girls were 17th in 2A with 17 points, while the Indian boys did not score at the state meet.

Earlier this season, the Hoxie boys and girls each won its first two meets of the year at Hoxie and Stockton. The Hoxie boys took fifth at the 83rd annual Scott City Relays and fourth at the Oakley Invitational. The girls were sixth at Scott City and second at Oakley.

At Quinter, Hoxie girls won the 19-team competition with 96 points, well ahead of Golden Plains’ 57. In a close boys’ competition, the Indians were fourth at 60 points, though just 10 behind Northern Valley’s winning score of 70. The top-five boys’ squads finished within 14 points.

In the girls’ discus, Balluch earned second with an impressive throw of 130 feet, 2 inches, which is now the second best throw in 2A, according to Kansas historian Carol Swenson’s statewide leaderboard.

Balluch was behind Wallace County’s Haylee Hennick, who uncorked a winning throw of 130-7, which is now the best mark in 1A by more than 10 feet.

Friess continued his strong season with runner-ups in the 1,600-meter and 3,200-meter runs. Last fall, he took fourth in 2A cross country.

Jared Kennedy took second in the high jump at 5-10 after he was a state qualifier in the event last year. Aumiller was third in the long jump at 18-9. Taye Washington earned top-seven finishes in the shot put and discus.